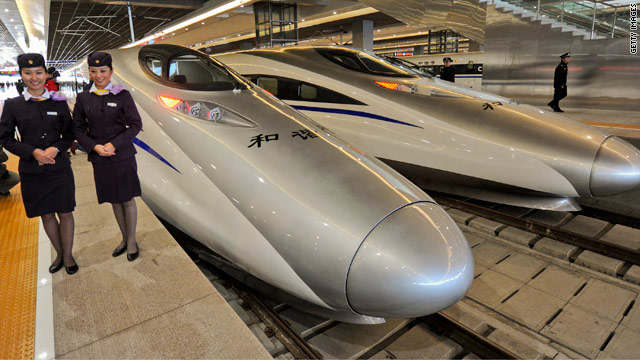 Rail attendants pose with the Chinese high-speed trains at a station in Shanghai
March 10th, 2011
11:53 AM ET

Why American innovation will beat out China's

Editor’s Note: Dr. Adam Segal is the Ira A. Lipman Senior Fellow at the Council on Foreign Relations and author of Advantage: How American Innovation Can Overcome the Asian Challenge.

Sometime this year, the Chinese government will announce a new initiative to lure ten scientific superstars to research labs throughout China.  The government hopes that if it offers a $23 million dollar award to Nobel Prize winners and other luminaries, they will relocate and raise the quality and prestige of Chinese research and development.

The program is part of a larger strategic push to shift from “made in China” to “innovated in China.”

The Chinese have great ambitions, but can they be met?

Spending on research and development as a percentage of China’s GDP has tripled over the past fifteen years from half a percent to 1.5%.  By 2020, about 2.5% of China’s mammoth GDP will likely go to R&D.

In 2010, China passed the United States and Japan as the world’s largest filer of patent applications.

But as with other announcements, anecdotes, and data sets that appear to herald the inevitable rise of China, they mask significant weaknesses.

There are serious shortcomings within China’s innovation system.

The government retains strong central control of research agendas and the careers of researchers.  There is cultural deference toward authority.  The state’s intervention in the market, which is motivated by a desire to reduce dependence on foreign technology, perversely creates incentives for copying and reverse engineering rather than bold innovation.

Patent filings have been driven up by tax breaks and other policy incentives.  Ultimately, many of  these filings have very little to do with innovation and are instead designed to position Chinese companies to sue foreign firms as they enter local markets for alleged patent infringement.

Chinese policymakers are aware of these problems.  They are addressing them. But progress will be slow because these problems are beyond just policy – they are at their heart social and political.

Take Google’s departure from the Chinese market.  While it was the attacks on human rights dissidents and the theft of the search giant’s intellectual property that garnered the most attention outside of China, those hurt the most may have been Chinese scientists.

Of the 784 Chinese scientists who responded to a survey conducted by Nature, 84 percent said that Google’s departure would “somewhat or significantly” hamper their research. History suggests that it will be difficult to build a truly innovative economy while tightly controlling information.

In the West, the dominant policy recommendation in response to the rise of China has been to spend more on R&D and train more scientists and more engineers.

U.S spending on R&D was $395 billion in 2010.  This is more than two and a half times larger than China’s expenditures of $141 billion.  But given the size of the Chinese economy and current growth rates, that gap will close.

Additional funding, especially for basic research and development, is necessary, but the United States cannot compete over the long term on raw numbers alone.

Nevertheless, the United States should take heart.  It has significant advantages, which it needs to exploit.  It has great social and cultural strengths, including the ability to conduct cutting-edge, interdisciplinary research; recognize new markets and consumer demands; manage across time, distance, and culture; tolerate risk and support entrepreneurship; and welcome new ideas and talent no matter what their origin.

Openness is essential, and the United States must remain the place where the most talented and skilled still yearn to come.

This means we must make some changes:

First, visa regulations must be reformed and the path to citizenship for highly-skilled immigrants made much smoother.

Second, the United States needs to remain open to the flow of money since foreign investment is essential to its economic health and innovative capability.  In particular, money must flow to early-stage start-ups.

Under the Obama Administration’s “Startup America” Initiative the government will launch a $1 billion early-stage innovation fund that will provide a 1:1 match to private capital raised by early stage funds.  Cuts in payroll taxes help lower the cost of hiring new workers, but the government should also consider reducing or eliminating capital gains taxes for investments in start-ups.

The single-minded focus on increasing the absolute numbers of scientists is distracting from the other work that must occur.

Third, what it means to be a scientist must be expanded.  The range of skills a scientist develops must be broadened, and there should be new pathways to careers in science. The Alfred P. Sloan Foundation now helps universities develop a professional science master’s degree, which includes two years of graduate-level coursework in math and science, interdisciplinary research, and classes in business management as well as the fostering of communication, teamwork, and entrepreneurship skills.

Future competiveness will be assured not by trying to match China in raw numbers, but by strengthening the software of U.S. innovation – the social, political, and cultural institutions that move ideas from labs to marketplace and have made America the center of innovation for decades.

The opinions expressed in this commentary are solely those of Adam Segal.

Topics: China • Economy • Innovation • United States
Next entry »From Fareed: Arm the rebels (once they ask)
« Previous entryRoundup: Should the U.S. follow France?

Next entry »From Fareed: Arm the rebels (once they ask)
« Previous entryRoundup: Should the U.S. follow France?

Smart ideas about an urgent crisis that is only getting worse ft.com/content/a9825d…
fareedzakaria

3:35 am ET September 23, 2022 RETWEET
RT @MaxBoot: This actually decreases my level of concern because I don’t think there is any chance that Putin will nuke NATO and trigger WW…
fareedzakaria

3:28 am ET September 23, 2022 RETWEET
Russia is, as Pres. Vladimir Putin has described it, a “vertical of power.” And that vertical looks more unstabletwitter.com/i/web/status/1…VMSedD
fareedzakaria