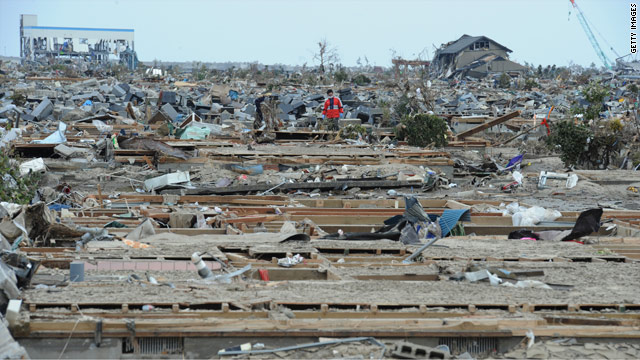 The foundations of tsunami-devastated houses sit amongst debris in Natori City.
March 14th, 2011
07:00 AM ET

Japan can fall further or remake itself

Editor’s note: Steve Clemons is founder and senior fellow of the American Strategy Program of the New America Foundation.  He publishes the popular political blog The Washington Note.

by Steve Clemons, Special to CNN

When faults in the Earth’s crust erupt or other major natural disasters hit, they can also expose and trigger fault lines in our own societies and can topple rigid or weak states while barely bothering dynamic and resilient ones.

This happened in the U.S. when Hurricane Katrina hit New Orleans, exposing enduring and disturbing divisions of race and class.  The 2008 earthquake in Sichuan, China, flattened hundreds of major structures, including schools that had passed their inspections through bribes.  Meanwhile, a single school whose principal had reinforced the structure and trained his students in emergency response survived, along with all of the children.

Now, in Japan, the largest seismic event in the country’s recorded history has struck.  An 8.9-magnitude tectonic rip just 80 miles off the shore from Sendai is now exposing painful fault lines in Japan’s political and economic order.

Japan is second only to Zimbabwe in the size of its national debt, owing today about two times its GDP for consumption beyond the government’s means.

Japan maintains one of the world’s most aged societies, with one of the lowest birthrates.  Its population actually peaked in 2005 and is now shrinking. Public attitudes toward immigration, to help bring in young workers and have them naturalize to become builders of tomorrow’s Japan, remain toxically negative.

In fact, Japan’s charismatic Foreign Minister Seiji Maehara resigned his position about a week ago because he had accepted a modest campaign donation from a woman of Korean descent who had lived in Japan most of her life, had a Japanese surname and had known him since the second grade.  Despite contributing a lifetime of work as a shopkeeper in Japan, this 72-year-old Maehara fan is still labeled a “foreigner” by many Japanese, and thus her contribution was technically illegal.

Japan and its political leaders are now at a real crossroads.  Prime Minister Naoto Kan, who became famous for his leadership in what is called the “tainted blood scandal” in which thousands were infected by HIV, may be the right guy to have the helm during this crisis and become the hero Japan desperately needs.

Kan may do better in stressful times than in bland ones, and Japan throughout its history has shown great ability to endure and to be resilient.

On the downside, though, Kan’s popularity has been dismal of late.  His Democratic Party of Japan is held in even less regard by voters, at least before the quake, and there have been five prime ministers in Japan in five years.

Will Japan’s political leadership take advantage of this crisis and use it as a way to “revision” Japan’s own sense of itself and its future, or will it simply hobble along, fixing things up while living well off its reserves until there isn’t anything left for future less-populous generation?

Japan’s work force today is too small to deal with the rips and tears caused by the quake and tsunami and thus will import labor.  This would be a good time to consider opening up what it means to be Japanese, to reinvent Japan and rise above the tragedy.  Bringing in more stakeholders who want to contribute to long-term vitality is the only way Japan can possibly manage what will become after this crisis an even more whopping debt load.

Otherwise, Japan may just keep cycling through prime ministers, witness a frustrated nationalism brew among those angry at its impotence and economic decline, and watch itself become the early 20th century Argentina of Asia: once great, once rich but soon greatly diminished.

The opinions expressed in this article are solely those of Steve Clemons.

Topics: Economy • Japan • Natural Disaster • Security
Next entry »Roundup: The situation in Japan
« Previous entryFareed's Take: What the devastation in Japan teaches us

Next entry »Roundup: The situation in Japan
« Previous entryFareed's Take: What the devastation in Japan teaches us