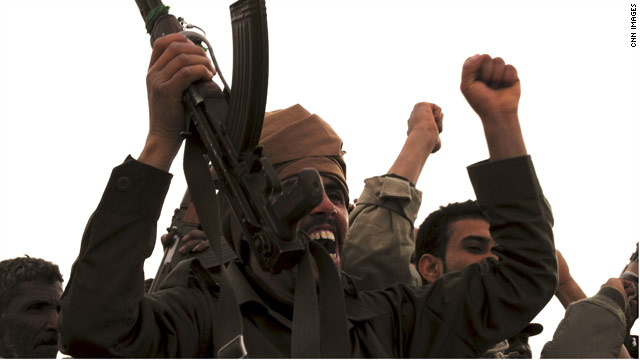 What if Gadhafi hangs on?

Editor's Note: Dr. James Lindsay is a Senior Vice President at the Council on Foreign Relations (where he blogs), co-author of "America Unbound: The Bush Revolution in Foreign Policy" and a former director for global issues and multilateral affairs at the National Security Council.

The Libyan rebels’ once bright prospects for ousting Moammar Gadhafi now appear grim. Pro-Gadhafi forces have the momentum, and one of Col. Gadhafi’s sons boasted that the revolt will be crushed “in 48 hours.”

With a battle for the rebel stronghold of Benghazi looming, President Obama must now confront a question that was unthinkable two weeks ago: How should he deal with a post-rebellion Gadhafi?

The answer is complicated by the fact that no one knows how the Libyan crisis will play out. Rebel forces may hold Benghazi and other critical towns in eastern Libya.

The Obama administration, looking at a rout of the rebels and spurred by the Arab League’s call for imposing a no-fly zone, now intends to ask the U.N. Security Council to authorize international military efforts to halt pro-Gadhafi forces.

The Security Council may not grant the administration its wish. Russia and China have resisted imposing a no-fly zone. They presumably will oppose authorizing air strikes against Libyan tanks and artillery.

Yet even if Russia and China stand aside at the Security Council, and outside military intervention occurs and succeeds in preserving the rebels’ position, the challenge of how to deal with a post-revolt Gadhafi will remain. He will control much of the country, including major oil production and exporting facilities. The Obama administration may have changed its mind about a no-fly zone, but it hasn’t given any indication that it is ready to roll back Gadhafi’s forces.

Instead, the administration’s response to Gadhafi’s rule will almost certainly focus on trying to further isolate his regime. Libya already faces an array of diplomatic, trade and financial sanctions. Washington will seek to maintain these measures and add others. However, the administration will likely shy away from sanctions that target the broader Libyan economy, because that would mean punishing ordinary Libyans.

What the administration does beyond trying to isolate Libya will be shaped by how Gadhafi behaves going forward. Many no-fly proponents paint a nightmarish picture of an embittered and emboldened Gadhafi returning to his old ways, financing terrorism and seeking weapons of mass destruction.

That could happen. After all, Gadhafi has a track record of such behavior. He responded to the 1986 U.S. airstrikes on Libya by orchestrating the 1988 bombing of PanAm Flight 103 over Lockerbie, Scotland.

But what is possible is not necessarily likely. Gadhafi is cruel, but he is also calculating. He knows that in a post-9/11 world, getting caught financing terrorism or acquiring weapons of mass destruction invites a U.S. attack and the possible end of his rule. An American president can respond slowly to a foreign dictator quashing a revolt. He can’t do the same when American lives are at risk. Expect the White House to privately – and perhaps publicly – warn Gadhafi not to cross that red line.

Gadhafi’s willingness and ability to engage in foreign adventures will also be tempered by the fact that he will have his hands full domestically rooting out real and perceived threats to his rule. But news of mass executions and torture will put pressure on the administration to do more to isolate Gadhafi. At the same time, the potential for a humanitarian crisis, especially in the next few weeks, could be substantial. The administration will need to find ways to meet humanitarian needs without strengthening Gadhafi. That may be difficult to do.

If the rebels hold on to Benghazi, the Obama administration might shift to a policy of overt or covert support for the rebel government. This could mean recognizing the rebels as Libya’s legitimate government (something France has already done), and lead to the U.S. arming and training them to hold off pro-Gadhafi forces. It may even go as far as to entail covert efforts to undermine Gadhafi’s rule.

The administration will face a different set of choices if the rebel movement collapses and some elements become radicalized and align with the likes of al Qaeda. A variant of this problem is if parts of Libya end up becoming lawless – under the control of neither Gadhafi nor the rebels. That could push the administration back in the direction of a policy that today seems distasteful – working with Gadhafi against jihadists. Until the recent rebellion, counterterrorism was one thing that brought Washington and Tripoli together.

The Obama administration’s likely strategy of isolation will leave many people dissatisfied, especially when, for a time, Gadhafi’s ouster seemed imminent. Isolation works slowly if at all, as the history of U.S. policy toward Cuba and North Korea attests.

Libya’s isolation will also be difficult to sustain. Many countries, over time, will lose their enthusiasm for shunning Libya. Gadhafi will almost certainly play the oil card, promising access to Libyan oil fields as a way to crack the coalition arranged against him. Regrettably, some countries will take him up on his offer.

The views expressed in this article are solely those of James Lindsay.

Topics: Libya • Revolution • Security • Terrorism • United States
Next entry »Elon Musk on the 3 inventions that will change the world
« Previous entryDivergent views on U.S. role amid Clinton's visit to Tunisia

Next entry »Elon Musk on the 3 inventions that will change the world
« Previous entryDivergent views on U.S. role amid Clinton's visit to Tunisia