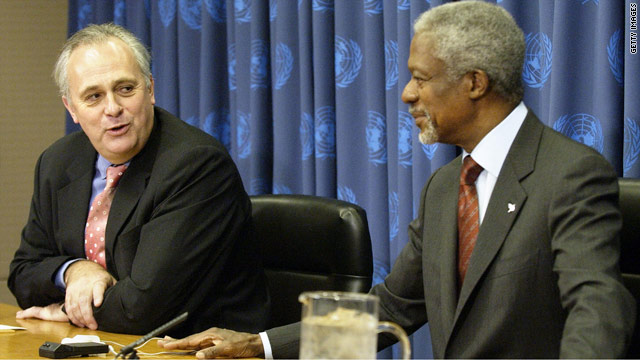 The month that remade multilateralism?

Mark Malloch Brown, who has served as Deputy Secretary-General of the United Nations and a deputy UK Foreign Minister, and who recently published the book The Unfinished Global Revolution, says the United Nations has made great gains over the past few weeks, but must ensure that the fragile coalition supporting international intervention does not unravel.

Check out the Q&A transcript.

Amar C. Bakshi: Libya followed by Ivory Coast – what does this mean for the United Nations?

Mark Malloch Brown: It has been a good few weeks for multilateralism in the United Nations - two Security Council Resolutions, both of which have deployed this relatively new doctrine of the Responsibility to Protect. In the case of Libya [this was done] explicitly; in the case of Côte d'Ivoire by implication, because in both resolutions [there] was a mandate to do - by whatever means it took - the necessary things to protect the lives of civilians against their abusive governments.

And this is pretty major because you know if there’s been one stumbling block to a more assertive UN in the area of politics and peacekeeping it’s been this doctrine of national sovereignty in the charter and an absolute kind of wind-break for many years on action inside countries without that country’s own expressed permission.

So it’s big stuff. I have to say that already in the UN you can see the backlash with a number of ambassadors denying that this really was the Responsibility to Protect mission - that it was a limited no-fly zone approved by the Arab League in the case of Libya, and that Western powers and their allies have abused and expanded it in ways which undermine its integrity.

I think there’s a warning there and I believe it’s really important that the West declare victory if you like, say the no-fly zones work, keep it in place to make sure civilian lives remain protected, but return the next stage of this to a political-diplomatic approach, which reunites the international community around removing Gadhafi as a threat to international peace and securing the transition to a government that Libyans choose for themselves, but drawing an absolute line that there will not be further overt external military involvement inside Libya itself….

I think at this stage we’ve got to make it clear that the humanitarian situation has been stabilized; it must be kept that way. But it’s time now for diplomacy, sanctions - a real effort to peel away Gadhafi supporters to engage what’s left in the regime in a discussion about how they leave, on what terms.  [We should] not risk dividing the international community by pushing our luck and pushing Resolution 1973 beyond its natural boundaries.

How would you respond to that criticism that this is just going to allow violence to fester?

Well I think that by continuing military operations that actually risks an even longer stalemate. People leapt into this as though the Second World War and its long desert campaigns in Libya had never happened. The long supply lines across these vast ways of desert overcame some of the most brilliant generals of the 20th Century. And the idea that an untrained opposition with just light equipment was going to take Tripoli was always a bit of a tall one.

Because they lack training and because weapons are not a substitute for organization, training, control and command, and the rest, the military solution itself also threatens stalemate…. [There should be] a series of really tough political steps at the Security Council [where] all collectively agree on:

–  seating the transitional government as a recognized government of Libya;
–  giving it access to the oil revenue and the frozen assets outside the country;
–  proceeding with the war crimes case against Gadhafi and those around him;
– and reaching out to the clans that support him and promising them that their interests and their safety will be secure if there is a change of leadership in Tripoli.

These tactics can get us to the solution we all want I think more quickly than the military approach but more critically it keeps the international community together. And that’s key because we cannot look at Libya in isolation.

We have a whole series of challenges through the North Africa and Middle East region from Syria to Bahrain to Yemen and perhaps others, and we cannot allow the international community to get divided…. We need everybody to be on the same page of pressing for peaceful, evolutionary change towards democracy in a way that protects life, promotes choice, but doesn’t lead to violence.

Mark Malloch Brown will be on GPS next Sunday, April 17.