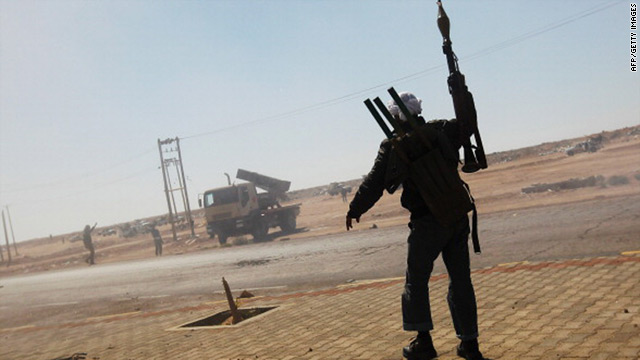 “France on Tuesday urged an intensification of NATO bombing raids on loyalist forces, saying the alliance was not doing enough to shield civilians from Col. Gadhafi's heavy weapons.

“Alain Juppé, the French foreign minister, said NATO was not doing enough to protect civilians after it assumed control of the air campaign from the United States eight days ago.

“‘NATO must play its role in full,’ Mr. Juppé said in the radio interview. ‘It wanted to take the operational lead, we accepted that.’

“After weeks of U.S. and NATO bombardment, about one-third of Moammar Gadhafi's ground armor has been destroyed, as well as most of the fixed air defense sites and aircraft, but a stalemate between government and rebel forces is emerging and could last for some time, according to a senior U.S. official with direct knowledge of the latest military assessments.

“In an interview Monday with the BBC, former Libyan foreign minister Moussa Koussa expressed concern that Libya ‘will be a new Somalia.’”

“‘Today, as a Libyan, I am the same as all the Libyans,’ said Koussa, who fled to London last month and announced he had resigned from Gadhafi's regime. ‘I ask everybody, all the parties, to avoid taking Libya into a civil war. This will lead to [much bloodshed], and Libya will be a new Somalia.’”

“Dozens of people have been injured in clashes with security forces in the Syrian port of Baniyas, where 13 people were killed on Saturday, residents say. The suburb of Bayda is surrounded by tanks and gunfire is ongoing, they say.

“[Human] [r]ights groups say hundreds of people have been arrested, including several students who took part in a rare rally at Damascus University on Monday.”

"The wave of arrests across the country includes journalist Faiz Sarah ... along with many more," Wissam Tarif, executive director of the human rights group Insan, told CNN. "We were able to confirm only 117 arrested but we expect the number to be a lot higher," he added.

The group said authorities raided homes and arrested opponents in the capital, Damascus, and also in the cities of Latakia, Homs, Aleppo, Jubah, Tartus and Banias.

“Yemen opposition parties on Tuesday urged Gulf mediators to spell out whether President Ali Saleh would hand over power early under their proposal to end a two-month crisis over leadership and political reforms.

“Gulf Arab foreign ministers said this week they would invite Saleh and the opposition coalition to mediation talks in Riyadh, a key financier of Sanaa who analysts say Saleh trusts, on a transition of power.

“The opposition said on Monday they rejected the Gulf Cooperation Council statement on the framework for the talks because it appeared to offer Saleh a waiver from any future prosecutions, demanded by the protest movement in the streets of Sanaa since February.

“Opposition spokesman Mohammed Qahtan said on Tuesday the parties also had concerns over the phrase "transfer of power", which does not specify the timeframe for Saleh to step down. Protesters and the opposition are demanding an immediate exit.

“’The Gulf states need to clarify the meaning of the transition of power,’ he told Al Arabiya TV, adding Gulf states had not yet set a date for their talks invitation.

Yemen Post adds that the opposition itself is bitterly divided:

“The first response came from Change Square in the capital Sana’a and also from Taiz governorate where protestors confirmed that they would remain at sit-in demonstration sites until all their demands were met.   They said that they wanted complete regime change.

Anti-government youth protesters also said in a statement that President Saleh should not choose his successor because he has no legitimacy to do so. They pointed out that only the revolutionaries possess this right.   The youth said in a statement that any party that alleges that it represents them in any external or internal dialogue was not authorized to speak on their behalf because all youth protesters all over Yemen have clearly announced that there should be no dialogue with the regime until it departs. “

“The daughter of a prominent Bahraini activist says she is on hunger strike to protest the arrest of her father, husband and other relatives after martial law was declared to quell weeks of pro-democracy protests.

“Zainab Alkhawaja wrote a letter addressed to U.S. President Barack Obama on her blog "Angry Arabiya" announcing the start of her hunger strike on Monday evening and urging him to call for the release of her family.

‘I chose to write to you and not to my own government because the al-Khalifa regime has proven that they do not care about our rights, or our lives,’ she said.”

“The military court’s sentencing of the blogger Maikel Nabil to three years in prison is a serious setback to freedom of expression in post-Mubarak Egypt, Human Rights Watch said today.

“The ruling comes at a time when the Egyptian military is drawing very restrictive red lines around permissible speech.

“’Maikel Nabil’s three-year sentence may be the worst strike against free expression in Egypt since the Mubarak government jailed the first blogger for four years in 2007,’ said Joe Stork, deputy Middle East director at Human Rights Watch. ‘The sentence is not only severe, but it was imposed by a military tribunal after an unfair trial.’

“Military officers arrested the 25-year-old activist on March 28, 2011, at his home in Cairo. The military prosecutor charged him with ‘insulting the military establishment,’ under article 184 of the penal code, and with ‘spreading false information.’”

Going after Mubarak and his men (CNN)

“The president’s men keep falling. Day after day, Egyptians wake up to news that yet another former official from Hosni Mubarak’s government has been arrested on charges of corruption and abuse of power. His prime minister. His chief of staff. His ministers of tourism and housing.

“Last Friday, the revolution was back in Tahrir Square. Tens of thousands of Egyptians turned out for what may have been one of the biggest rallies since the 18 heady days of street protests that toppled Mubarak on February 11th. The crowd was baying for the head of their former president.

“The military is also encountering pressure from current and former junior officers who have joined the protests and posted YouTube videos accusing the army of protecting former government officials and abandoning the ideals of the revolution. Progressive officers have criticized the 75-year-old Tantawi and the old guard as too inflexible to meet the demands of a changing Middle East.

“’The military is concerned and worried about officers dissenting from within,’ said Ammar Ali Hassan, an analyst and former military officer. ‘Any divisions from within the military establishment might result in a military coup that would sweep away the legitimacy of our civilian revolution.’

“Yet, for many Egyptians, the military remains the country's most hallowed institution. It has been the protector of national pride and a counterbalance to Mubarak's reviled police state.”

This was a great conversation! twitter.com/washingtonweek…
fareedzakaria