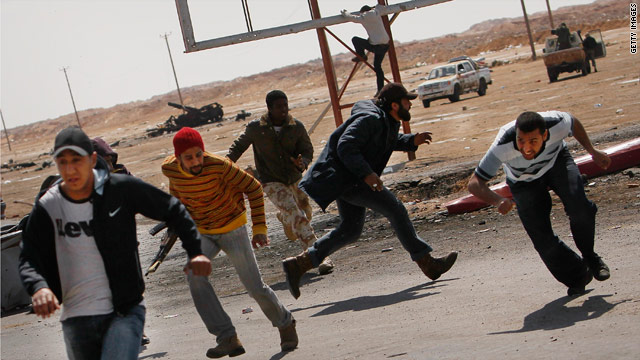 Editor's Note: Dr. James Lindsay is a Senior Vice President at the Council on Foreign Relations (where he blogs), co-author of "America Unbound: The Bush Revolution in Foreign Policy" and a former director for global issues and multilateral affairs at the National Security Council.

By James Lindsay – Special to CNN

Britain, France, and Italy took a step deeper into the Libyan civil war this week by announcing that they will send military advisers to aid the beleaguered rebels. The decision grabbed headlines, but it won’t do much to change the course of the fighting.

British Foreign Secretary William Hague justified the decision to send military trainers by saying: “As the scale of the humanitarian crisis has grown, so has urgency of increasing our efforts to defend civilians against attack from Gadhafi forces.”

Washington has applauded its allies’ decision, but it is not following suit. The Obama administration is only offering the rebels $25 million in body armor, tents, uniforms, and other nonlethal equipment.

The British, French, and Italian decisions are a tacit admission that the prospects for ousting Muammar Gadhafi have dimmed. The rebels have failed in their effort to retake key Libyan towns. Meanwhile, the situation in Misurata, Libya’s third largest city, has grown increasingly grim as pro-Gadhafi forces continue to attack rebel positions.

But deciding to do something is not the same thing as deciding to do enough. The British, French, and Italians are offering far less than the breathless news headlines suggest. The number of advisers headed to Benghazi is small—a maximum of twenty British advisers and perhaps ten or so French and Italian advisers. These trainers will operate under strict limitations on what they can do.

Even if NATO flooded Libya with military trainers the military balance on the ground would not change any time soon. Crack fighting forces aren’t built over night. Just look at how long the United States has been at it trying to build the Afghan and Iraqi armies.

Advisers and assistance probably won’t make a difference in the long run either. Pro-Gadhafi forces are relatively well-armed and trained. They also have good reason to continue fighting: the reasonable fear that they will lose their privileges if not their lives if the rebels prevail.

So the most likely outcome is that the fighting in Libya will drag on for months.
Will the rising civilian death toll eventually spur NATO to send ground troops into Libya? Probably not. Libya is not Vietnam, where the introduction of a few military advisers in the late 1950s eventually grew into a commitment of half-a-million troops by the mid-1960s. Although Vice President Joe Biden insists that “the traffic [at home] can bear politically more in Libya,” the polls suggest otherwise. Neither Americans nor Europeans are eager to send their fellow citizens to fight, and possibly die, in Libya.

This highlights the fundamental strategic flaw in NATO’s military operations. Washington, Paris, and London decided that Gadhafi must go, but they are unwilling to pay the cost to make that happen. Libyan civilians, precisely the people the NATO mission is supposed to protect, are paying the price for this strategic incoherence.

The views expressed in this article are solely those of James Lindsay.