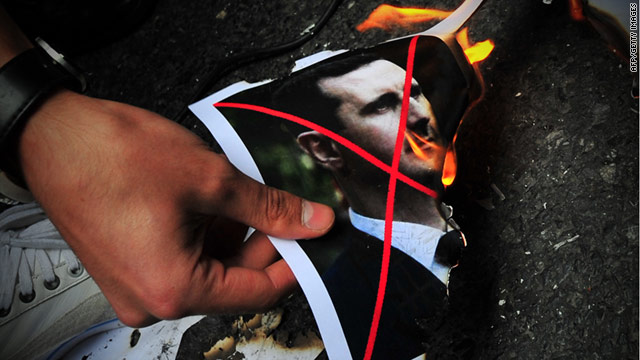 Syria's brutal crackdown on anti-government protests has sparked demonstrations around the world, as seen here in Turkey.
May 18th, 2011
03:15 PM ET

Editor's Note: Michael Young is opinion editor of The Daily Star and author of The Ghosts of Martyrs Square: An Eyewitness Account of Lebanon’s Life Struggle, published by Simon & Schuster and listed as one of the 10 notable books of 2010 by the Wall Street Journal. He tweets @BeirutCalling.

By Michael Young – Special to CNN

The U.S. sanctions that have just been imposed on Syrian President Bashar al-Assad are useful, but not enough.

Assad’s regime has lost all legitimacy. It cannot continue in power. Something is fundamentally broken in Syria, and the time has come to ask the president to leave office. The United States can, and must, put together a road map to bring about this outcome. Rather than focus on sanctions, in his Thursday speech President Barack Obama should call for Bashar al-Assad to step down. He demanded the same of Hosni Mubarak, who was responsible for killing far fewer of his own people.

U.S. officials have been saying they have little leverage over Syria.  That’s nonsense. The reality is if anyone has leverage over Syria, it is the United States. However, leverage is something you need to build up. You don’t just pick it out of the ether.

The way to develop leverage on Syria is to mobilize an international coalition to isolate the Syrian regime, and convince it that its time has come to depart. This is essential in order to avoid a further exacerbation of sectarian tensions in Syria, which the Assad regime has manipulated to heighten the prospects for violence, in that way saying: "It’s either us in power or chaos." Sectarian conflict could affect neighboring states with mixed societies, above all Lebanon and Iraq.

First, the Obama Administration should convince the Arab countries – above all Saudi Arabia and Egypt - that they need to encourage change in Syria as a means of weakening Iranian influence in the Levant. Both have a great incentive to go along with this, and would welcome, finally, an American strategy to contain Tehran’s influence.

Russia and China can also be swayed to support Assad’s departure. Remember, both countries allowed sanctions against Iran, a country far more vital to their interests than Syria. They have argued against condemnation of Syria at the Security Council on the grounds that the situation there does not constitute a threat to international peace and security. But Assad's brutal methods are heightening sectarian tension, which in turn risks spreading across Syria’s borders.

If that does not constitute a threat to regional stability, therefore international peace and security, nothing does. Their reluctance to condemn the Syrian regime’s brutal crackdown is increasingly inexcusable.

The European Union, with the British and the French taking the lead, can also be brought around to impose sanctions on Syria. Indeed, both countries are now working to prepare a resolution on Syria at the UN Security Council. German resistance is not likely to be enough to block broader European agreement, especially after Germany was recently embarrassed for refused to stand against Libya’s regime.

But this package has to be broader than just isolating the Assads. It must involve persuading the Syrian ruling family to leave the country, even if officials must be held accountable for their crimes. Turkey can play a key role in this process, The regime does not necessarily want to want to fight to the last man, and its members may recalculate once they see that they are isolated regionally and internationally.

I don’t believe that the Syrian opposition is sectarian; it is not solely a Sunni phenomenon, and definitely not a Salafist phenomenon. Demonstrators have faced weeks of live ammunition peacefully, without resorting to sectarian mobilization. However, the regime has done its best to exacerbate sectarian relations, and unless this is curbed soon, there is a real risk of an uncontrollable deterioration of the situation, and therefore of communal relations. An opposition that has behaved in so responsible a manner, with great courage, surely merits to be given a chance to put together a democratic, sovereign Syria.

So the U.S., along with the Arab states and the international community, needs to develop a road map for a smooth transition in Syria – one aimed at ensuring that the Syrians determine their fate as soon they can. Change has swept across the Arab world. Now it’s Syria’s turn. Obama has to take the lead in showing Assad the door.

The views expressed in this article are solely those of Michael Young.