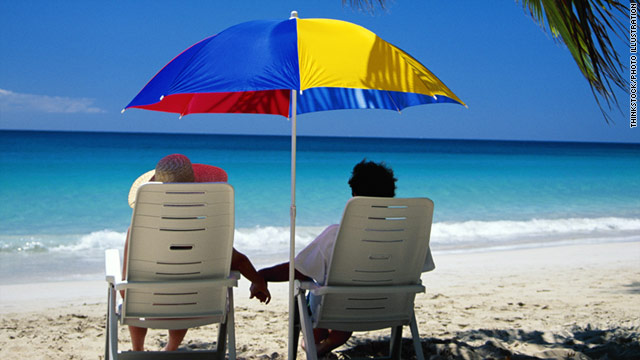 Thinking of getting away? You probably have much less vacation than workers in other parts of the world.
May 23rd, 2011
05:08 PM ET

Why is America the 'no-vacation nation'?

By A. Pawlowski, CNN

Let's be blunt: If you like to take lots of vacation, the United States is not the place to work.

Besides a handful of national holidays, the typical American worker bee gets two or three precious weeks off out of a whole year to relax and see the world - much less than what people in many other countries receive.

And even that amount of vacation often comes with strings attached....

Only 57% of U.S. workers use up all of the days they're entitled to, compared with 89% of workers in France, a recent Reuters/Ipsos poll found....

So what's going on here?

A big reason for the difference is that paid time off is mandated by law in many parts of the world.

Germany is among more than two dozen industrialized countries - from Australia to Slovenia to Japan - that require employers to offer four weeks or more of paid vacation to their workers, according to a 2009 study by the human resources consulting company Mercer.

Finland, Brazil and France are the champs, guaranteeing six weeks of time off.

But employers in the United States are not obligated under federal law to offer any paid vacation, so about a quarter of all American workers don't have access to it, government figures show.

That makes the U.S. the only advanced nation in the world that doesn't guarantee its workers annual leave, according to a report titled "No-Vacation Nation" by the Center for Economic and Policy Research, a liberal policy group.

Most U.S. companies, of course, do provide vacation as a way to attract and retain workers.

But the fear of layoffs and the ever-faster pace of work mean many Americans are reluctant to be absent from the office - anxious that they might look like they're not committed to their job. Or they worry they won't be able to cope with the backlog of work waiting for them after a vacation.

Then, there's the way we work.

Working more makes Americans happier than Europeans, according to a study published recently in the Journal of Happiness Studies. That may be because Americans believe more than Europeans do that hard work is associated with success, wrote Adam Okulicz-Kozaryn, the study's author and an assistant professor at the University of Texas at Dallas.

So despite research documenting the health and productivity benefits of taking time off, a long vacation can be undesirable, scary, unrealistic or just plain impossible for many U.S. workers.

Read the rest of the article here.