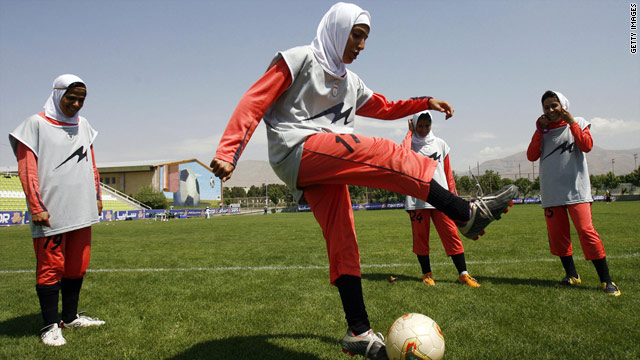 The Iranian women’s soccer team’s smiles turned to tears when they learned they were disqualified from an Olympic qualifying match because of their hijabs.

A Bahraini FIFA official banned the Iranian women footballers from the game for not wearing the approved cap instead.

FIFA stated that wearing the hijab while playing was a safety issue because it “could cause choking injuries.”

Several years ago, Iran held negotiations with FIFA to find an acceptable uniform. They agreed on a cap that covered the hair but exposed the neck and ears.

According to FIFA, “Despite initial assurances that the Iranian delegation understood this, the players came out wearing the hijab, and the head and neck totally covered, which was an infringement of the Laws of the Game.”

Was Iran trying to push the Islamic-dress-code envelope?

Or was something else at work?

Iran claims FIFA’s decision was politically motivated. Iran has been a vocal critic of Bahrain’s crackdown on its opposition. Bahrain, meanwhile, has accused Iran of meddling in its internal affairs.

Regardless, this tiff gives Iranian President Mahmoud Ahmadinejad something to talk about. “These are the dictators and colonialists who want to impose their lifestyle on others," he thundered at a news conference.

What do you think? Who is to blame here? Should FIFA allow Iran to replay the match? Let us know in the comments sections below.

11:09 am ET February 18, 2020 RETWEET
RT @CNN: Sen. Bernie Sanders has proposed to commit the US to achieving 100% renewable energy for electricity and transportation by 2030. "…
fareedzakaria

10:36 am ET February 17, 2020 RETWEET
RT @CNN: Nigeria was added to the Trump administration’s controversial visa and travel bans list@FareedZakariaia analyzes whether this is a…
fareedzakaria