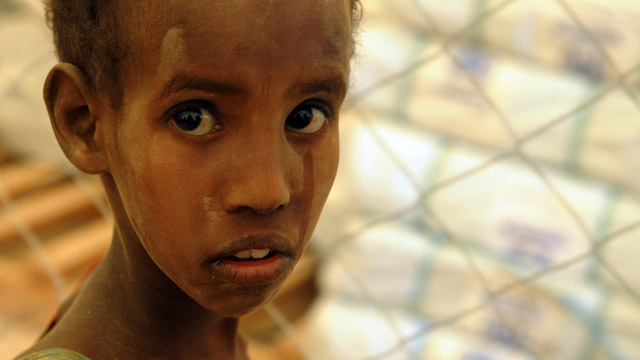 A newly arrived Somali refugee waits in a registration center in the Dadaab refugee camp on July 10,2011 in northeastern Kenya. Thousands of Somalis have fled into neighbouring Kenya and Ethiopia in recent weeks and many have died of starvation while fleeing due to one of the region's worst drought in decades. The over-crowded Dadaab refugee camp was built for 90,000, but is now home to over 380,000 Somali refugees.
July 14th, 2011
01:44 PM ET

The biggest emergency I have ever seen

Editor's Note: Elhadj As Sy is the UNICEF Regional Director for Eastern and Southern Africa.

By Elhadj As Sy – Special to CNN

Not long ago, Hawa Issak realized that if she stayed in her home in Southern Somalia, she would not be able to secure the survival of her two children and herself. She was pregnant with a third child, her husband had left her and the region’s worst drought in decades had scorched the earth creating utter desolation.

She set out with six other families to find help in Kenya. It took them a month to reach Dadaab, on the other side of the Kenyan border, almost 200 miles away. It’s a remarkable feat for anyone. Now imagine thousands - tens of thousands - of people similarly on the move, stumbling for weeks through dust and scrub beneath a blistering sun. Most of them are women and children hoping to stay alive long enough to reach what has ballooned into the biggest refugee camp in the world.

Right now there is a massive and shocking humanitarian crisis unfolding in the Horn of Africa –specifically in Somalia, Kenya, Ethiopia and Djibouti. The triple shock of drought, skyrocketing food prices and the ongoing armed conflict in Somalia has created an almost perfect storm of disaster.

Over 2 million children are malnourished, including some 500,000 who are suffering from life-threatening severe malnutrition. Families are fleeing their communities in search of food and water. Many are dying before they can get help.

What once was a village has become the third biggest human settlement in Kenya. So far, some 380,000 people are already in Dadaab looking for aid with an additional 10,000 people arriving every week. They are coming mostly from Somalia, where political instability deprives its starving citizens of any safety net. At Dadaab, they can get shelter, some safety and desperately needed food and water.

Up to 25% of children arriving in the camp are malnourished - that’s double what is considered the emergency threshold. Severely malnourished children receive therapeutic milk and, once they are stabilized, a ready-to-use high protein peanut paste that helps them recover from wasting. About $1 worth of this milk can feed a child for a day.

But the scope of this crisis is quickly overwhelming current resources. And those who survive the trip to Dadaab are sometimes too far gone to be saved.

Last Sunday, when I visited the Ifo section of Dadaab, I learned that six young children had died in the therapeutic feeding center, just in the course of the previous week.

It seems almost unbelievable that so many children might be at risk of dying from the consequences of malnutrition in the year 2011. UNICEF, along with national and international partners, is working non-stop to provide aid to those in Dadaab and throughout the Horn of Africa - strengthening its feeding and nutrition centers which have been operating in many places and providing safe drinking water and vaccines to make sure diseases do not compound the already desperate situation.

Still, there is no question more resources are needed, and fast. Aid organizations must have additional funding to meet the needs of the 10 million people threatened by this disaster. The more that’s done right now, the more lives can be saved. This is a crisis that’s been slow to build and even slower to make it onto the world’s radar. We cannot respond slowly. Every day counts.