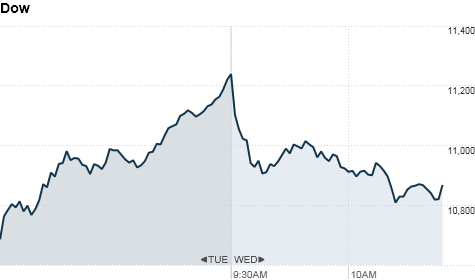 Following a statement by the U.S. Federal Reserve that said it planned to keep interest rates near zero for the next two years, investors sent Wall Street's Dow Jones Industrial Average up by 4 percent (WSJ) at the end of trading yesterday. The Fed also said it was considering a "range of policy tools" to combat a stagnating U.S. economy, which some investors interpreted as further quantitative easing.

The Fed's move indicates that it sees limited U.S. growth through 2013, but nonetheless hopes to assuage investors (NYT) and foster risk-taking by keeping borrowing costs down.

Asian and European markets responded positively (FT) to the announcement in Wednesday trading, even as long-term investor sentiment remained cautious amid the ongoing U.S. and European debt crises.

While the Fed's statement may have broken the market panic, it was not enough to restore confidence in continued growth, says the Economist.

With markets rattled by the downgrade of U.S. debt, some experts fear running out of policy tools to prevent another global recession, while others are calling on government and central banks to improve fiscal and monetary policy coordination, says this CFR Analysis Brief.

Global markets' reaction to eurozone turbulence and the S&P downgrade of U.S. debt add uncertainty to U.S. foreign policy, raising questions about which goals the country has the means to pursue, says CFR's James M. Lindsay.

Syria Rejects Turkish Plea Against Crackdown: Syrian President Bashar al-Assad rebuffed Turkish Foreign Minister Ahmet Davutoglu during six-hour bilateral talks in Damascus over the Syrian regime's continued crackdown (WSJ) on anti-government protesters. Assad said he would not give up his fight against "terrorists."

The United States and some international partners are pressuring Damascus through the UN and other channels as Assad's crackdown on protesters intensifies. Expert opinion remains mixed on whether the Syrian government can be weakened, says this CFR Analysis Brief.

Since taking office, the Obama administration has ramped up the U.S. drone program in Pakistan, write Peter Lampert Bergen and Katherine Tiedmann in Foreign Affairs.

BANDLADESH: The Bangladesh International Crimes Tribunal is set to begin hearing its first case against Islamic leaders suspected of war crimes (Dawn) during the Bangladeshi war for independence from Pakistan in 1971.

Famine in the Horn of Africa underscores the problems of an international foreign aid community struggling to keep up with its commitments at a time of a falling dollar and rising food prices, says CFR's Laurie Garrett.

IVORY COAST: President Alassane Ouattara called on his ministers to sign a code of ethics (Reuters), in an effort to tackle widespread corruption and nepotism and restore confidence in the country's finances.

Student Protest Turns Violent in Chile: A demonstration in the Chilean capital of Santiago and other cities, which called for the government to increase education spending, turned violent as masked demonstrators (Guardian) burned cars and looted shops.

Violent Riots Spread in England: Hundreds were arrested as a fourth night of violent rioting and looting (EveningStandard) spread to the English cities of Manchester, Nottingham, and Birmingham Tuesday night, while a heavier police force in London kept the capital relatively quiet.

GERMANY: Chancellor Angela Merkel is facing a revolt (FT) from parliamentary supporters in the Christian Democratic Union and the Free Democratic Party over last month's EU deal to restructure eurozone institutions and provide Greece with a second bailout.

The eurozone, once seen as a crowning achievement in the decades-long path of European integration, is abuffeted by a sovereign debt crisis of nations whose membership in the currency union has been poorly policed, says this CFR Backgrounder.