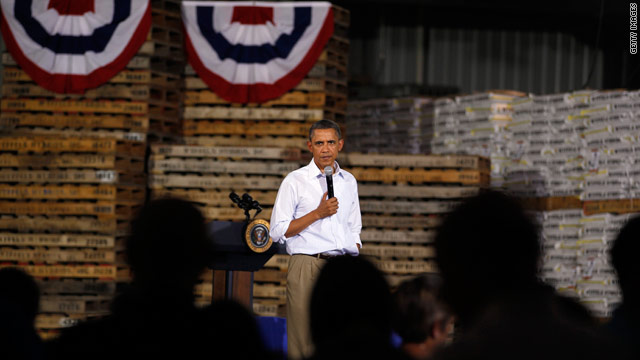 Obama should restrain the regulators

By Michael Mandel – Special to CNN

If the White House really wants to send a message about jobs and investment, it needs to add a jobs tour stop in Washington, D.C. so President Obama can tell federal regulators that promoting jobs must be part of their agenda, too. Drawing attention to innovative companies and meeting workers around the country is a worthy endeavor, but it won’t do much good if regulators keep putting a low priority on investment and growth.

Back in January, the president signed an executive order telling rule-makers to weed out unnecessary or outdated regulations that interfered with growth. While defending regulations to protect safety, health and the environment, the president noted in a Wall Street Journal op-ed that regulations have sometimes created unreasonable burdens “that have stifled innovation and have had a chilling effect on growth and jobs.” His goal, the president said, was a less intrusive system that to “make our economy stronger and more competitive.”

But seven months later, unemployment remains unacceptably high and regulators continue to act in ways that discourage business investment and make it harder for even our strongest industries to create jobs. While regulators may have followed the letter of the executive order and rooted out a few old rules, some are ignoring the order’s spirit. Indeed, regulatory drag may be one reason why the past decade has seen few breakthrough products, outside of information technology and communications.

What’s more, some recent regulatory actions suggest that Washington may end up slowing innovation, investment and job creation in tech and communications as well. For example,  AT&T invested $19.5 billion in the U.S in 2010, more than any other corporation, at a time when most companies are hoarding cash. But instead of applauding AT&T’s willingness to spend and create jobs, regulators at the Federal Communications Commission have recently decided to slow down their reviews of both AT&T’s bid to merge with T-Mobile and the company’s earlier proposal to buy wireless licenses from Qualcomm, which has been pending since February. The Commission’s slowdown pace adds uncertainty to the marketplace and keeps investment plans from moving forward.

Or consider the Obama Administration’s attitude towards Google, a company whose innovative accomplishments are the envy of the whole world. Unlike many other large American multinationals, Google is investing billions in the United States and creating jobs here as well. The just-announced acquisition of Motorola Mobility is likely to mean a bigger pile of Google cash invested on the development of new smart phones and software, adding to the U.S. lead in this area.

But instead of congratulating Google for its domestic investments in innovation, the Federal Trade Commission recently opened an antitrust inquiry into the company—an inquiry which is likely to intensify after the Motorola announcement. To antitrust regulators, the close scrutiny of Google make sense—but how does it contribute to the economic recovery?

To be sure, sometimes more regulation is helpful to making markets work better; deposit insurance is a case in point, as are rules prohibiting various kinds of financial chicanery. In other cases, such as drug safety, everyone would agree that effective regulation is essential.

But absent some clear and present danger to public health or safety, and with America mired in an agonizing slow recovery, we need to put innovation and job-creation first. This means taking a light-handed approach to regulation, especially where the harm it is intended to prevent are still largely hypothetical.

More fundamentally, we should build on the self-policing approach of the January executive order, with an independent Regulatory Improvement Commission that would gather input from all stakeholders in order to evaluate and prune excess regulation. The fact is that self-reviews like the one initiated in January have been falling short for 30 years.

What’s needed is a regulatory system that supports innovation and job creation while also protecting public well being. That’s why a presidential jobs tour should include time with regulators to remind them that putting Americans back to work must be our highest priority.

Topics: Jobs • Technology
Next entry »New low of 26% approve of Obama on the economy
« Previous entry'Anchor babies' a problem? Not so much

Next entry »New low of 26% approve of Obama on the economy
« Previous entry'Anchor babies' a problem? Not so much