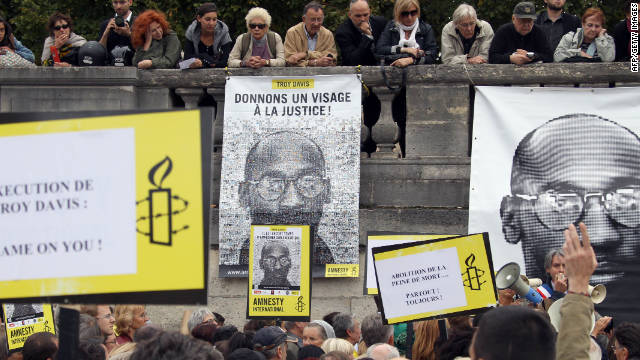 People hold placards on Wednesday during a demonstration in Paris against the execution of Troy Davis.
September 22nd, 2011
12:18 PM ET

Troy Davis may be dead, but his execution Thursday in the American state of Georgia has made him the poster boy for the global movement to end the death penalty.

World figures, including Pope Benedict XVI and former U.S. President Jimmy Carter, human groups and commentators urged the execution to be halted - but to no avail. On Wednesday Davis was put to death by lethal injection for the 1989 killing of off-duty police officer Mark MacPhail despite doubts being raised over the conviction.

The execution sparked angry reactions and protests in European capitals - as well as outrage on social media. "We strongly deplore that the numerous appeals for clemency were not heeded," the French foreign ministry said.

"There are still serious doubts about his guilt," said Germany's junior minister for human rights Markus Loening. "An execution is irreversible - a judicial error can never be repaired."

The European Union expressed "deep regret" over the execution and repeated its call for a universal moratorium on capital punishment.

Topics: Culture • Global • Law
Next entry »Is the Egyptian-Israeli relationship over?
« Previous entryZakaria: I oppose the Palestinian U.N. bid for practical reasons

Next entry »Is the Egyptian-Israeli relationship over?
« Previous entryZakaria: I oppose the Palestinian U.N. bid for practical reasons