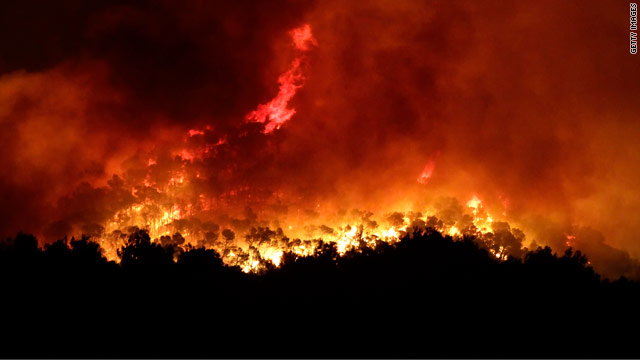 How to stimulate the economy while curbing wildfires

Editor’s Note: Tong Wu is an environmental policy analyst and researcher at the University of California, Berkeley. To submit an article for consideration, email the Managing Editor of CNN.com/GPS at Amar[dot]Bakshi[at]turner[dot]com.

By Tong Wu – Special to CNN

In recent months, the nation has been riveted by the spectacle of catastrophic wildfires across the western United States, most recently in Texas.  Last year, we witnessed the same harrowing phenomenon in Russia, where a catastrophic outbreak of forest fires racked up an appalling ecological and social toll.  These conflagrations have not only wrought significant ecological damage and released large amounts of carbon emissions, but also imposed far-ranging economic burdens.  In southern California, for instance, studies indicate that environmental damages caused by wildfires can decrease the property value of a nearby house by tens of thousands of dollars.  Combined with the resulting standstill in business activity, property damage and lost jobs and income, the fallout from these disasters can stretch into the hundreds of millions of dollars and have all the makings of a recession – albeit one caused by poor management of natural, not financial, resources.

However precipitous such large wildfires may seem, the fact of their occurrence and the scale of their devastation should come as no surprise.  And, even more galling, although these disasters lend themselves to commonsensical and economically sound solutions, relatively little has been done to forestall their continued outbreak.  Currently, it is estimated that up to a third of all forests in the United Statesare at a high risk of unplanned wildfire.  Forests are one of the most important storage and sequestration sources for carbon that would otherwise end up in the atmosphere.  Yet in many parts of the U.S., their increasing propensity to go up in flames could turn them into net contributors to climate change.

The management of forests in the United Stateshas a troubled history.  Since the advent of large-scale human settlement of the American West in the 19th Century, intensive human degradation has made many ecosystems unnaturally susceptible to catastrophic wildfires.  One hundred years ago, the great fires that burned approximately three million acres in the northern Rocky Mountains required over 1,700 separate ignitions.  In 2002, only three were needed to catalyze the Hayman and Rodeo-Chediski fires that razed 600,000 acres in Colorado and Arizona.  Recent research suggests that increasing temperatures from global warming have and will continue to exacerbate conditions.  Yet in Texas, where one the most destructive wildfires in the state’s history continues apace, governor Rick Perry still refuses to acknowledge the reality of man-made climate change.

Fortunately, there are solutions that can benefit ecological sustainability and create a much-needed fillip in employment and income opportunities.  In economic analyses of environmental management projects across the western United States, ecological restoration produced multiplier effects (the economic “bang for the buck” of every dollar spent) that were higher than the estimated impacts of the 2009 government stimulus.  For instance, an ongoing forest restoration project in Arizona, one of the most fire-ravaged states in the country, could generate close to 15,000 jobs and over $1.3 billion of output at the same time as greatly diminishing the risk of catastrophic wildfire.  Expanding the scale of treatment would likely create an even larger economic stimulus.  Studies of Oregon, California, and Montana yield similar conclusions.  Along with improved economic prospects, the improved ecological conditions from restoration boost greater recreational opportunities, erosion prevention and a more reliable source of natural resources.

Society and the environment are inextricably intertwined.  A destructive fire is not only disruptive for nature, but highly inimical to a region’s economy as well.  Yet this interdependence remains an incongruous concept in many avenues of public policy.  The topic, perhaps inevitably, has become politicized, with differing interest groups appropriating the issue to frame their own talking points.  Instead of focusing on the obvious economic benefits to be had from better environmental management, the prevailing discourse has become marred by recriminations between politicians, environmental activists and industry.

Furthermore, in the midst of continuing economic malaise in theUnited States, the easy gains in jobs and income from sorely needed ecological restoration and other “green” stimulus programs are almost entirely absent from the conversation.  It is often said that environmental challenges must be sidelined in times of economic exigency.  Topics such as ecological decline and climate change must be sacrificed to more demanding social concerns.  This is a contrived conflict.  Many environmental policies can also generate immediate economic benefits – they are quite literally “shovel ready.”  Indeed, few policies seem more logical and efficient given existing challenges and opportunities.

The views expressed in this article are solely those of Tong Wu.