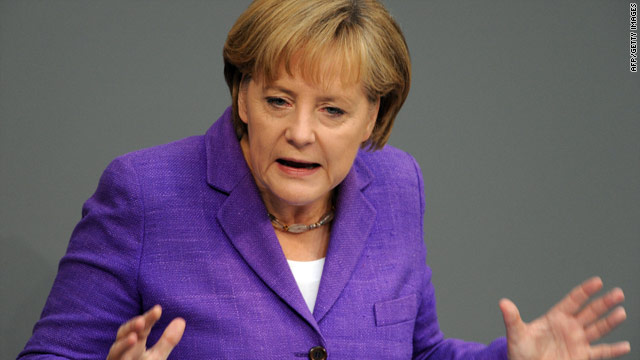 Zakaria: In defense of German sluggishness

It is ironic that Greece - a tiny economy that is a mere 2.2% of the Eurozone and not even among the top 25 economies in the world - has produced so much turmoil. But there has always been a fundamental flaw in the design of the Eurozone. Europe created a single currency without adequate fiscal policy coordination. Very competitive economies like Germany were joined together with uncompetitive economies like Greece.

Nevertheless, I remain cautiously optimistic. This is because, despite what many critics say, Germany is playing its cards right. Many argue that Germany should come up with a dramatic solution to the debt problem.  Chancellor Angela Merkel is not leading, critics charge. I disagree. Germany has a good reason for being sluggish.  It is trying to force countries like Greece to enact meaningful reforms.

The German concern is that if they come up with some dramatic solution to the euro crisis, such as guaranteeing everybody’s debt, financial panic would end but countries like Greece and Portugal would feel no pressure to undertake necessary reforms. These countries would not get their budgets in order; they would let their fiscal houses continue to crumble; they would not become competitive.

All of Germany’s leverage would evaporate the moment it wrote the check to its neighbors. Indeed, a couple of weeks ago, Germany watched as the European Central Bank responded to a financial scare in Italy by intervening.  The situation stabilized. Then the Italians immediately began watering down their commitments to enact economic reforms. This is Germany's nightmare.  It's what they're working so hard to avoid. Understandably, Germany is trying to force as much real reform out of debtor countries as possible before writing checks or making guarantees.

Germany is doing this not just for sound economic reasons.  There are also political motivations. Angela Merkel couldn’t do it any other way. The German taxpayers would revolt if she suddenly guaranteed the debts of countries like Greece. They would feel like they were falling into the same trap that caused the problem in the first place. For these reasons, you’re not going to see dramatic action from Germany.

What you’re going to see instead is some complex solution that places pressure on Greece and other countries to reform while at the same time reassuring markets that Germany will not let the euro fail. This is understandable and sensible, but it will not satisfy the markets, which want a simple, clean solution. For this reason, the Germans are flirting with disaster. What is likely to emerge is a complex, incremental solution. The markets will have to learn to accept it.

The part that I worry about is that even after all of this, Greece is probably not salvageable.  It has too much debt and, fundamentally, it is not a competitive economy. It doesn’t make anything anyone wants. This is not true of Spain or Ireland. Spain and Ireland are quite dynamic economies that got hammered by the financial crisis. So the real question is whether there is some way to ring-fence Greece from the rest of Europe. Perhaps then there’s a scenario in which the Germans guarantee all remaining debt.

The truth is: Greece has defaulted before. There’s a book out that says that since it’s independence in the 1830s, Greece has been in default for 50% of its national existence. The difference is that now the Germans are willing to bail the Greeks out. That’s what’s new.

Europe is trying to create a greater, integrated economy. And this project has gone on for 25 years. For 25 years, everyone has said it’s all going to collapse. But it doesn’t collapse. In fact, far from collapsing, Europe has gotten in some ways larger, stronger and deeper. Now this crisis is clearly the biggest challenge Europe has faced. And Europe has reached this point because the currency was badly designed.

I can’t be sure Europe will get through this mess. My best guess is that, eventually, the solution will come from the European Central Bank (ECB). Like the U.S. Federal Reserve, the ECB has a lot of power and leeway.  If it just started guaranteeing or buying various kinds of debt, it would be able to stabilize the euro. And that’s also politically more palatable.  If the German government has to “recapitalize the ECB” that sounds much better in German than saying “we’re going to bail out the Italians” - even though effectively it is the same thing.

On the leadership of Greek Prime Minister George Papandreou, I actually think he’s trying to handle this in a pretty responsible way. He has accepted huge budget cuts – cuts that, frankly, no American politician could ever accept or enact. The Greeks have gone through two rounds of huge budget cuts. They are proposing a third round of these budget cuts.  But Papandreou is also a politician and he recognizes that his political situation was getting very difficult. And he saw that the opposition party was acting incredibly irresponsibly by opposing the terms of this European bailout and so he called their bluff. The whole point of the referendum was to say to the opposition, “Fine, if you want to oppose this deal, then you take responsibility for the fact that Greece will be thrown out of the Eurozone.”

Papandreou's bid worked. He called the opposition's bluff and as a result the opposition backed down. Overall, I think Papandreou has handled this in a pretty clever way.

Interestingly enough, as a footnote, the leader of the main opposition, Antonis Samaras, and Prime Minister Papandreou are not just people who know each other. They were roommates in college in Amherst in America. Today they are going through this titanic tussle in Greece. You have to wonder what it’s like to be acting out a great drama on the world stage with your college roommate.

Next entry »Why Tunisia looks much rosier than Egypt
« Previous entryIs Netanyahu bluffing once again?