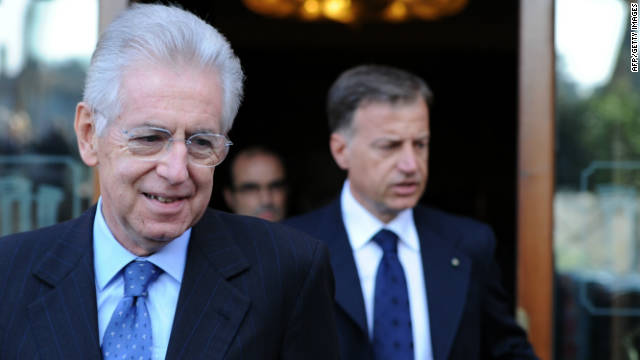 Editor's Note: Paolo Manasse is a Professor of Economics at the University of Bologna.

Since the worldwide financial crisis began in 2008, economists have been predicting the nightmare scenario that now seems to be unfolding in the European Union: a domino effect, as the economies of Greece, Ireland, Portugal, Spain, and Italy (the PIIGS, as they've come to be known) collapse. Yet most observers got the ordering wrong. The crisis arrived in Italy before it arrived in Spain. The reason is political. Spanish Prime Minister José Luis Rodríguez Zapatero, realizing that he had lost the backing necessary for difficult reforms, announced last April that he would not run for re-election. Italian Prime Minister Silvio Berlusconi, who faced similar economic challenges, tried to keep his seat. He lost that battle and resigned on Saturday, after having let the Italian economic crisis fester for months.

The Italian public shares some of the blame. For 17 years, it put up with a leader who had managed to collect an impressive record of criminal proceedings (for corruption, bribery, complicity in prostitution with a minor, Mafia connections, false balance sheets, false testimony) but went acquitted for all of them. La Repubblica, Italy's largest daily, argued that many Italians, including Berlusconi himself, had been living in a some kind of national Truman Show, fabricated by the television stations that Berlusconi himself owned. In his last press conference as prime minister, for example, Berlusconi noted that "Italians are not feeling the crisis - restaurants are full and flights to exotic destinations are overbooked."

European financial markets have also been caught sleeping. Fifteen years ago, when Italy joined the eurozone, the risk associated with Italian debt plummeted, which meant that Rome could borrow much more cheaply. Even so, the Italian government engaged in a few years of fiscal restraint, including undertaking deficit and debt reductions, but the availability of cheap money proved too tempting. The country went on a decade-long borrowing spree. Thanks in part to Italy's spending and in part to the global recession, this year the country's debt totaled some 120 percent of GDP - the second highest ratio in the eurozone. After a tumultuous year of contentious politics and stagnant growth, Italy saw the cost of its debt rise, and the specter of default dethroned its sultan.

So what happens now? On Wednesday, Italian President Giorgio Napolitano appointed Mario Monti, president of Bocconi University and former European Commissioner, as a life senator. He is now one of seven permanent appointees to the Italian Senate. By all appearances, Monti is next in line for Berlusconi's seat. [Update: Monti officially named Italy's prime minister]. The new government should come together quite quickly; Napolitano is rushing to build it, and will likely swear it in sometime next week. It is an open question, however, whether Monti will enjoy a durable majority in government. Indeed, Berlusconi's style - guided by the ideas that servility to the powerful matters more than merit and that the rule of law is only one option among many - still pervades the country.

Berlusconi was arch enemy of the left and messiah-like among his own constituents. His party, People of Freedom (PdL), is deeply divided, with hawks (many ex-socialists and ex-fascists, whose political destiny is most closely tied to Berlusconi) calling for new elections, and doves (ex-Christian Democrats) supporting Monti. And the main opposition party, the center-left Partito Democratico, fares little better. It is similarly divided between short-term hawks, who favor a temporary government with a limited mandate, and doves who favor a longer-term "save-the-country" coalition.

After Monti is sworn in, both factions of Berlusconi's PdL could back him so as not to appear irresponsible before the next round of elections. That would be the worst-case scenario for Italy. The hawks would soon abandon ship, perhaps politicking with claims that Monti is a communist (should he, say, introduce a tax on property). The hawks could withdraw their support, and new elections would be called. Doubts over the much-needed structural reforms could lead to soaring interest rate spreads; Berlin and the European Central Bank would turn a cold shoulder; Italy would file for support from the International Monetary Fund; Rome would not be able to roll over its debt; there would be a bank run (Italian banks hold 43 percent of outstanding government debt); and ultimately the country would default. Germany, France, and Holland (Holland is in good economic shape and hostile to bailouts) would break away from the euro. And we would witness the end of the common currency before 2013 is out.

The best-case scenario would be if, realizing the direness of the situation, the doves among Berlusconi's party and the Partito Democratico, together with smaller parties to its left, get the upper hand and vote in a Monti government without the hawks. In this case, Monti's backers would be committed to supporting him until new elections could be held responsibly, say in mid-2013. The parties would come to some agreement on equally distributed "sacrifices" by way of expenditure cuts, taxes, and reforms. Interest spreads would fall, and Italy could slowly recover. The eurozone would hold together, and, even if it lumbered along at an uneven pace, more than two decades of unprecedented economic cooperation would be preserved.

Best, worst, or some middle-of-the-road scenario - whatever comes next will depend on how much Napolitano can temper Berlusconi's remaining influence. The larger the role of the president, the lower the probability of a financial meltdown. And that battle is not over yet. While addressing his own supporters on television the day of his fall from power, Berlusconi made it clear that he would "double his efforts, as the majority party leader, to change and modernize the country." He may still try to make a comeback if Monti fails. Even he doesn't, however, Monti would be in a tough situation. Should he attempt to rally wide political support for a restructuring program, he would undoubtedly end up dragged into lengthy negotiations that would delay a resolution and water down any final proposal. That is why, in the long term, it would be better for Italy if Monti opted for the riskier strategy: relying on both parties doves and putting forward a more comprehensive restructuring on a take-it-or-leave-it basis.

The broad outlines of what Italy needs to do are clear. First, Rome must cut its politicians' outrageous expenses - high salaries, generous annuities granted after a few years in Parliament, about 600,000 official cars (compared with 75,000 in the United States), and so on - sending a clear message that the privileges of what has been known as the "political caste" will no longer be tolerated. Then it should reform the pension system, cracking down on fraud in Italy's south and on "seniority" pensions, which were given to thousands of workers under forty in Italy's north. Next, the government must reform the dual labor market, in which middle-aged industrial workers are hyper-protected but young workers in the service industries are basically hung out to dry, and in which women's participation in the labor force is among the lowest in Europe. It will also be necessary to abolish the professional orders (for lawyers, journalists, notaries, taxi drivers, and so on) and their formidable barriers that limit access to the professions and keep up their costs. Monti would then have to get serious about curbing the black economy, which makes up around 17 percent of GDP, and tax evasion, which is estimated to cost Italy millions of euros per a year. And finally, he must reform the tax system by shifting the burden from firms and labor to consumption and rents.

Read: Why Obama should take out Iran's nuclear program.

Italians will swallow such a handful of bitter pills only if everyone else is doing so, too - and if they, under Monti, rediscover an idea that Berlusconi always ridiculed: the "common good." They would be wise to, as the upsides of the best-case scenario are huge. An economic restructuring in Italy would not only save that country from default but it would also avert the breakup of the eurozone - and, perhaps most important for Rome, it would begin to repair the harm done by nearly two decades of corruption and mismanagement carried out by Berlusconi and his contemporaries.

I have argued elsewhere that the current Italian troubles are largely homemade; they are not the result of contagion from Greece or Europe, as many once feared. But since Italy's collapse would mean the end of the euro, we now have to worry about the Italian crisis infecting other countries. What Italians do for Italy, they also do for Europe.

The views expressed in this article are solely those of Paolo Manasse.

Next entry »What's next for Occupy Wall Street?
« Previous entryNye: A reviving Japan?