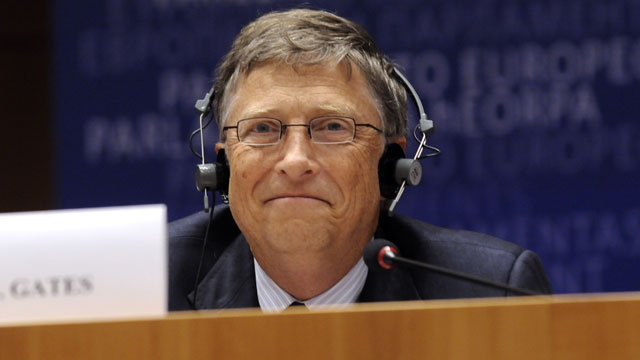 In the hours before President Obama strode up to the podium to deliver his State of the Union Address, Bill Gates was quietly publishing his own thoughts for the year ahead.

Well, he was doing it as quietly as Bill Gates does anything.

Posting a link to his letter on Twitter, the businessman, philanthropist and regular entry on world rich lists wrote:  “We cannot tolerate a world in which 1 in 7 people is undernourished, undernourished (sic), stunted, and in danger of starving to death.”

The chairman of software giant Microsoft calls on the world to accelerate the “Green Revolution” started by the late Nobel Laureate Norman Borlaug in the 1960s.

“We can be more innovative about delivering solutions that already exist to the farmers who need them,” he writes. “Knowledge about managing soil and tools like drip irrigation can help poor farmers grow more food today.”

Read how it's crisis as usual for Indonesian farmers

He says it’s ironic that most of the one billion people who are currently living in extreme poverty across the world are farmers, living on farms. The problem, Gates says, is that their small plots don’t produce enough food to feed even one family. Investment is needed, he says, to help extremely poor people become self-sufficient.

The problem is that in the depths of a global economic crisis the developed world has a much louder voice than the millions of starving farmers who are just trying to survive.

Whole nations are lining up with begging bowls to service debts accrued during better times and it’s difficult to see where extra cash will come from to filter down to farmers.

Gates’ letter came out as delegates slept in hotels and chalets around the luxury ski resort of Davos, Switzerland ahead of the first day of the World Economic Forum.

Topics: Food
Next entry »Zakaria: The case for making it in the USA
« Previous entrySlaughter: 5 conditions for intervention in Syria

Next entry »Zakaria: The case for making it in the USA
« Previous entrySlaughter: 5 conditions for intervention in Syria