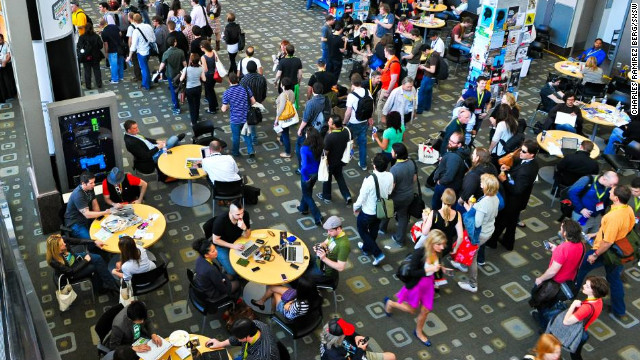 A crowd at the interactive festival at the Austin Convention Center from the 2010 South by Southwest Conference held in Austin, Texas.
March 8th, 2012
06:30 PM ET

Editor’s Note: Priya Parker, an expert-in-residence at the Harvard Innovation Lab, is the founder of Thrive Labs, a visioning and strategy advisory firm based in Brooklyn, New York. You can follow Priya on Twitter  @priyaparker.

By Priya Parker - Special to CNN

If January is when the old guard gathers in Davos, Switzerland, March is when the new guard descends on Austin, Texas. At a time of crisis in America, Europe, the Middle East and beyond, a group of tech-savvy do-gooders meets, greets and tweets at South By Southwest.

The conference has experienced a surge in popularity in recent years, exploring questions well beyond the sphere of technology. The several hundred panels and featured sessions for this year’s SXSW Interactive tend to reflect the current concerns of the rising elite. In this post, I’d like to add one concern to their list: Can the avid, accomplished doers at SXSW show the way for a rising generation of Millennials who are all too often afraid to fulfill their potential as leaders?

I run an advisory firm that works with leaders young and old to conceive and implement bold, authentic visions. As part of that work, I recently completed a year-long study of the values and behaviors of the world’s next generation of leaders – the most talented, educated, capable Millennials. I was curious about how this rising cohort of leaders makes decisions and plots the future. I concentrated on dual degrees, or graduates of elite master’s degree programs in both business and public policy.

These are people in their late twenties and early thirties who have usually worked in both the public and private sectors, lived in multiple countries, and passed through some of the most prestigious organizations on earth (the Gates Foundation, McKinsey & Co., offices of prime ministers and presidents).

What I found was a rising generation of elite leaders who bring wonderful new gifts to the table – more empathy than their predecessors, more worldliness, more pragmatism for an angry, ideological age. But I also found my generation of young leaders paralyzed, hesitant, and unwilling stick their necks out and lead on the big questions of our time: how to build a more equitable and sustainable capitalism, how to manage the transition to a post-Western world, how to extend prosperity to developing countries without pushing the planet over the brink.

This generation is distinct from its predecessors in demonstrating new ways of leading: less top down and more lateral; less by command than by catalysis. Its members tend to believe that change is made by bringing out the best in others. It is also less ideological and dogmatic, and more empirical and pragmatic than the generation now in power. Its religion is not party or, frankly, religion, but rather “impact.”

This generation feels pressure to make a difference in the world, and is comfortable using the levers of business, public policy and civil society to do so. And they tend not to be satisfied with small, everyday impact. “For my Dad, it would be his patients,” one child of a doctor told me, when asked about definitions of impact. “For me, it’s providing health care to benefit the largest amount of people.”

But strange anxieties are getting in the way of these ambitions – none more prominently than something called FOMO. It is the “fear of missing out,” and it has been written about by others (including in an article about SXSW last year) as a phenomenon caused by social media. These media show them all the cool places they could be and cool things they could be doing, which always seem better than where they now are. However, my research shows that FOMO is leaking out of the technology realm and becoming a defining ethic of a new generation.

“Am I setting up my adult life to be the way that it could optimally be?” one of my subjects asked aloud, speaking of her general approach to life decisions. This subject explained how FOMO could even invade the pursuit of a spouse: “On the personal side, there’s this fear of ‘Am I committing to the right person?’”

More and more, particularly among those who have yet to make those big life decisions (whom to marry, what kind of job to commit to, where to live), FOMO and FOBO – the “fear of better options” – are causing these young leaders to stand still rather than act. “The way I think about it metaphorically is choosing one door to walk through means all the other doors close, and there’s no ability to return back to that path,” one subject told me. “And so rather than actually go through any doorway, it’s better to stand in the atrium and gaze.”

Those with the most options in this generation have a tendency to choose the option that keeps the most options open. Wrap your head around that for a second. It’s one of the reasons that management consulting has become so popular among today’s young elites.

As one subject explained to me, “Frankly, a lot of people end up defaulting to consulting as a compromise, because they look at it to get the best of both worlds, because it not only passes the airplane test, and you don’t have to sacrifice your social status, you can engage in all the activities, you’re never left out of anything, because it’s the 70 percent solution.”

A current consultant told me, “For me personally, it was lack of clarity.” He added: I knew the types of jobs I wanted, but there wasn’t something specific out there calling me.” A number of other subjects said that they didn’t feel “ready” to take on the problems that most interested them. They wanted to linger and dabble and “learn” for a while longer.

As a result, the North Star of this cohort has become what many of its members call “optionality.” There is great worry that they’re going to choose the “wrong” option. In the last year, I’ve run over 100 Visioning Labs with individuals and groups of young leaders to help them identify their values and passions, and build visions that reflect what they want to do in the world.

In one exercise, I ask people to imagine a year away from their present work and cares, with unlimited time and resources. People speak of doing things like “write a book,” “launch a venture,” “spend time with my grandparents,” “produce a film.” I then have them circle the top three options and reflect on them. Fear and practicality are the most commonly cited reasons for not doing such things in real life. And when they begin to think about what they want to do in the future, many look at their immediate next step as the one that will keep the most doors open so that they can have a Pocket Year much, much later.

Many of us watch the choices of our peers and predecessors with a blend of admiration and anxiety. What seems to afflict this cohort – more than the political strivings or existential angst that defined earlier generations of elites – is a persistent anxiety about their might-have-been lives, about the ones that got away. Life for this group is diminished by the presence of so many options one click, one job switch, one social connection away. Though many of these young people described themselves and their cohort with words such as “passionate,” a commonly cited fear was “not having my idealism match my choices” and “being too afraid to take the leap.”

A number of subjects talked about risk aversion rising with success. One subject said, “I’m probably unhealthily obsessed with making the right choices.” He added: “I think it comes from a fear of missing out on something bigger and better in whatever you do. So I like to think of myself as someone who has made good choices up until now and I have enjoyed the kind of outcomes that I’ve been able to get from making those kind of choices.

“I think when you feel like you’ve made all the right choices and don’t feel like you’ve had any major failures, that kind of track record makes you always cautious about continuing to make good choices, and improving outcomes – whatever that means for you.”

Over the next two weeks, I will write a series of posts on CNN.com/GPS sharing what I’ve found to be the obstacles blocking our generation of Millennials from thriving, as well as some of the activities that I’ve observed lead people to thrive again. This week’s gathering in Austin attracts the most adventurous and risk-seeking members of the Millennial cohort. But as they gather to discuss and debate and design the future, I hope they will help think about how to get the rest of us to think bigger, think bolder – and to do.

The views expressed in this article are solely those of Priya Parker.

Next entry »Global women's ambassador on the Arab Spring, Islam, politics and contraception
« Previous entryZakaria: Another war in the Middle East?