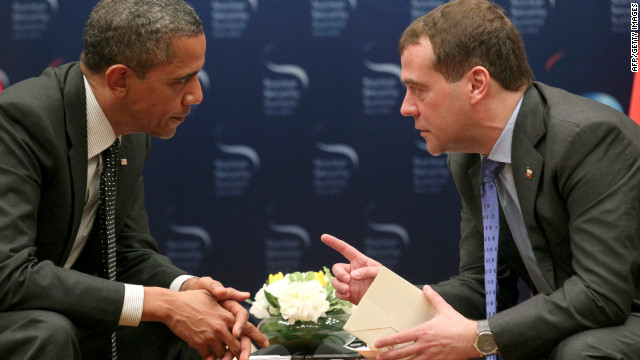 Russia and geopolitics on the campaign trail

Editor's Note: Matthew Rojansky is the deputy director of the Russia and Eurasia Program at the Carnegie Endowment for International Peace.

By Matthew Rojansky – Special to CNN

President Obama has not had much luck with microphones.  The President’s unscripted exchange with outgoing Russian President Dmitry Medvedev on Monday in Seoul became the latest “whisper heard round the world.”

Unbeknownst to either leader, microphones caught Obama’s assurance that he would have more “flexibility” after the November presidential election to resolve tough issues like ballistic missile defense, and likewise broadcast Medvedev’s promise to “transmit this information to Vladimir.”

On the campaign trail, Mitt Romney seized this opportunity to lambast Obama for showing any flexibility in relations with Putin’s Russia, which he labeled America’s “number one geopolitical foe.”

Aside from confirming the view that Medvedev is little more than Putin’s go-between, this episode has served as a timely reminder that the wider world still matters for the remaining seven months of the U.S. presidential campaign season.

Foreign policy - especially relations with an important but difficult state like Russia - is seldom high on the U.S. political agenda, but candidates had better be well prepared to face such matters head on this year, or risk looking foolish.

Russia’s continuing cameo on the campaign trail is a matter of timing.  Russia has just concluded its most important presidential election since the 1990’s, and will soon inaugurate Vladimir Putin to yet another term, this one lasting until (at least) 2018.

At the same time, after almost two decades of negotiations, Russia is set to join the World Trade Organization (WTO), which means the U.S. Congress must either vote to give Russia permanent normal trade relations, or U.S. companies will suffer.

This has already opened the floodgates of lobbying by business and human rights advocates, speechifying on Capitol Hill, and editorializing among the talking heads.  In the coming months, we will hear plenty more about balancing free trade with tough sanctions against those responsible for Russia’s disappointing record on human rights and democracy.

In the spirit of the “Arab awakening,” Russia’s popular protest movement has also given democracy-builders and freedom-agenda-setters cause to hope for a “Slavic Spring.”

In some corners, there is a palpable feeling that it is 1989 once again, there is a new iron curtain to be struck down, and the wave of popular uprisings that began in Tunisia will not be over till it has flooded the streets of Tehran, Moscow, and even Beijing.

For true believers, this is a historic moment of opportunity, when those aspiring to lead the free world must either stand and be counted - on the model of Ronald Reagan - or be remembered as the Neville Chamberlains of our era.

Given a choice between Reagan’s “tear down this wall” clarity, and the sure infamy of accommodating today’s Kremlin autocrats, Romney can be forgiven for choosing the confrontational approach - after all, the “reset” is a signature Obama initiative, and he won’t win conservatives or swing voters by playing nice with Putin.

But whichever contender occupies the Oval Office next January, he is likely to find that Russia remains an indispensable partner on a bevy of top U.S. security interests.

First, Washington will continue to rely on the so-called Northern Distribution Network, which uses Russian roads, rail and airspace to transit more than half of the troops and supplies required for NATO’s effort in Afghanistan.  With the impending withdrawal of U.S. forces, this route will become equally important as a secure egress for weapons and ammunition that cannot be left to the Afghan army, and must not fall into insurgent hands.

Likewise, we cannot expect Kabul to keep drug and weapons flows in check, or hope for political stability in the region, without Russia’s active participation and support - in other words, as NATO draws down, Moscow will have to ramp up its own commitment.

Second, Russia is the pivotal player on global nuclear security issues, whether it is preventing nuclear proliferation, promoting safety and security of nuclear materials, or taking sensible steps to reduce bloated nuclear arsenals and avoid the prospect of a future arms race.  Yet Russia is a prickly partner, and without reassurance that current plans for ballistic missile defenses in Europe will not undermine its deterrent, the decades-old legacy of nuclear de-escalation started by Reagan could come to a tragic and bitter end.

Lastly, Russia’s prolonged support for the Bashar al-Assad regime in Syria illustrates the still-central role it can play in managing and resolving - or deepening - regional crises.  Moscow’s Security Council veto is a hefty arrow in its quiver, but by no means the only one.  With Syria, it can withhold arms sales, deny al-Assad a safe haven, and freeze the regime’s financial assets.

On Iran, it has already backed international sanctions to restrict dangerous and dual-use technologies, and canceled a sale of sophisticated air-defense missiles.

And on North Korea, Russia and China are practically the only powers with an open channel to Pyongyang, while both have agreed to interdict suspect cargo shipments headed for the hermit kingdom.  The Russian navy has even played a key role in fighting piracy off the horn of Africa.

To handle Russia right on the campaign trail may depend on which audience is listening.  But to handle Russia as President of the United States will demand a consistent balance between the righteousness of Reagan’s Berlin Wall speech and the hard-nosed realism of his nuclear negotiations.

Campaign-friendly oversimplifications about friends and foes, white hats and black hats, will just make it harder to find common ground with Moscow on the next Middle East crisis, on our Afghanistan exit strategy, or on contentious trade issues.

The candidates would be wise to lay some groundwork now for a Russia policy robust enough to bear the weight of concrete U.S. interests that depend on cooperation with Moscow.  Otherwise, it would be best to keep quiet altogether.

What exactly should go into such a policy is a question for deliberate and exhaustive debate among experts, and the results are not likely to be sound bite friendly.  But here is a guiding principle with which Ronald Reagan would surely have agreed: Be steadfast in pursuit of your interests, and remember that the other side will do the same.

The views expressed in this article are solely those of Matthew Rojansky.