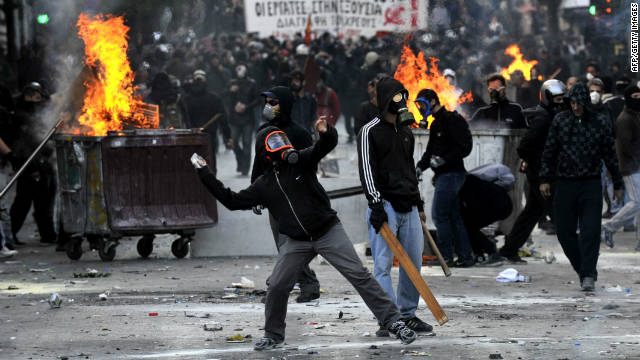 Police clash with masked demonstrators in Athens on October 20, where tens of thousands of protesters rallied.
April 23rd, 2012
10:52 AM ET

The age of protests

Editor’s Note: Dr Maha Hosain Aziz is a Professor of Politics (adjunct) in the MA Program at New York University, a Senior Analyst at geopolitical consultancy Wikistrat and an Asia Insight Columnist for Bloomberg Businessweek.

If you were a politician in 2011 in South Asia, there’s a good chance you might very well have been slapped. In both Nepal and India, a citizen so frustrated by political inertia physically lashed out at his local politician. If you were leader of a country with high youth unemployment in the Middle East or Western Europe, there’s no question you faced waves of anti-government protest. Even in Russia - usually immune to challenges to the state - you experienced some form of public discontent over the status quo.

In fact, on every continent last year, in major, middle and small states, citizens expressed bursts of frustration against their governments. Such sentiment has continued in 2012; recurrent protests indicate citizens’ lack of confidence in their political leaders and their conviction that there must be a better, more legitimate way to govern.

But this phenomenon isn’t just about political leaders losing public support - it’s also about policies losing legitimacy. In 2011, groups of citizens stood up to attack specific government policies they felt were simply not legitimate. In parts of India, they didn’t trust the new anti-corruption bill, leading to hunger strikes. Across Spain, Greece and Italy, they didn’t believe the government’s austerity policies were fair, prompting mass protests. In the tiny hamlet of Ballyhea, Ireland, citizens publicly disapproved of the state’s decision to bail out banks, staging demonstrations every Sunday for 43 weeks. In Chile, they didn’t agree with the government’s education policy, leading to protests for over seven months.

In 2012, this particular crisis of policy legitimacy has endured: citizens continue to actively question their leaders’ policies before and after they are implemented. They don’t believe current economic, political or social policies will work.  They feel there must be a better, more legitimate policy alternative.

In Europe, for instance, it’s no secret how intensely citizens feel about certain economic policies to the point that some have committed suicide.  Earlier this month, a 77-year old shot himself in the head in Athens’ Syntagma Square over pension cuts. This was in the backdrop of austerity protests that have recurred all over Greece since 2010.

In Spain last month, during a general strike, thousands held protest marches in various cities over the government’s spending cuts. In Barcelona, the demonstrations became violent with protesters smashing storefront windows and setting street trashcans on fire. Around this time, in Lisbon, Portugal, strikers blocked trains and shut down ports to protest the stringent economic conditions imposed as part of the EU-IMF bailout. In the Czech Republic, massive protests over tax hikes and budget cuts resurfaced in Prague’s Wenceslas Square on Saturday, involving more than 80,000 workers, students and pensioners.

But citizens have not just found economic policies lacking in legitimacy - many have taken issue with specific political policies. In January in Budapest, Hungary, for instance, thousands staged protests and hunger strikes over the country’s new constitution, only one day after it was formalized. Protesters spoke out against the undemocratic nature of the constitution, which they felt hinders individual liberties, media freedom and government accountability.

In Russia, some anti-Putin protesters have shifted their focus to local politics.  Two weeks ago, thousands rallied against alleged fraud in Astrakhan’s mayoral election, after losing candidate Oleg Shein went on a month-long hunger strike. In India, last year’s focus on the anti-corruption bill has resurfaced - activist Anna Hazare is planning a protest fast in New Delhi on June 3 to demand a stronger anti-corruption bill than the one drafted by government.

Social policies have been targeted as well. In January, thousands of Romanians rioted in Bucharest over a controversial government health plan, sparring violently with police until the plan was scrapped days later. In Spain last week, the government announced dramatic healthcare cuts: medicines will no longer be free to pensioners, which is already being questioned by some protesters.

In Quebec province, Canada, for over nine weeks, more than 300,000 students have been protesting over a government plan to increase university tuition by 75% over the next five years; last week, in Montreal, protests became violent with hundreds of students throwing stones at police officers armed with tear gas. In Naples, Italy, a museum director attacked the government’s policy - or lack thereof - to support the arts last week. He is set to burn three works of art per week in protest until politicians take notice.

There’s no doubt that the relationship between government and citizen in most countries (whether democratic, authoritarian, or hybrid) is at a considerable, perhaps all-time, low.  We are clearly in the throes of a crisis of policy legitimacy.

The greatest struggle for political leaders continues to be how to regain the confidence of a very jaded citizenry such that they can effectively govern. In the meantime, we should expect that in most countries, citizens will continue to challenge the legitimacy of their government’s economic, political or social policies - no matter their merit - for the rest of 2012. We should also expect that at some point this year, in some part of the world, yet another politician will likely be slapped by a citizen so frustrated over his government’s policy failures.

The views expressed in this article are solely those of Maha Hosain Aziz.