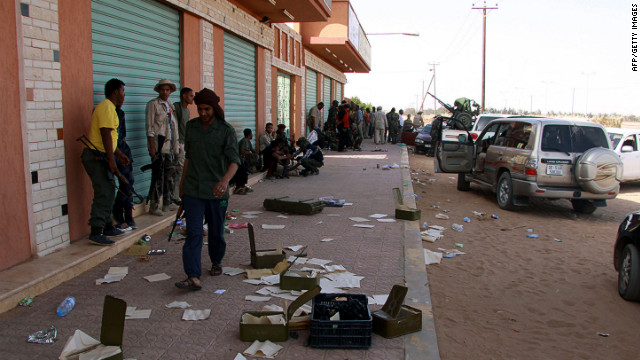 Mohamed Eljarh is a UK-based Libyan academic researcher and political/social development activist. He is from the city of Tobruk in Eastern Libya. Follow on Twitter: @Eljarh. The opinions expressed in this commentary are solely those of Mohamed Eljarh.

By Mohamed Eljarh, Special to CNN

In less than 40 days, Libya is set to witness the first elections since the ouster of the late Moammar Gahdafi. But are the elections coming too early?

Post-conflict elections should mark the pinnacle point in the recovery and reconstruction of Libya. Libyans and the international community look at the election on June 19 as a milestone toward peace and democracy.

But some studies show history can paint a gloomy picture of elections held soon after bloody armed struggles, when political institutions may be weak or non-existent.

Many believe elections soon after the armed conflict that ended Moammar Gadhafi's regime would foster the promise of peace and democracy. It would show a democratic transition and effective recontruction, which in turn would assure the international community about the stability of Libya. Elections would also help post-conflict Libya attract much needed foreign assistance and investment to help rebuild the country.

Whether elections prompt consolidation or conflict depends in large part on the timing of these elections and the sequence of the processes involved are right.

Skeptics of early elections in Libya argue that voting so soon after the toppling of Gaddafi’s regime would undermine peace and democracy because of the hastily designed or non-existent institutions to facilitate the election process. The preparation for the elections and all its processes have been chaotic, with reports of confusion over the registration process - and even the head of the Higher Elections Commission was recently replaced.

Rushed elections in Libya would also increase the odds that one of the many different factions will reject the results and have the means to return to hostilities. For example, the Barqa Council that represents the region of Cyrenaica is boycotting the elections and is calling for the people in Libya - and particularly in the east - to boycott the elections. The leaders of the Barqa Council are claiming that the National Transitional Council is marginalizing them and the people they represent by going ahead with the allocation of the National Assembly seats to the country’s three regions - 100 for Tripolitania, 60 for Cyrenaica and 40 for Fezzan.

The prospects of premature elections in Libya are especially dangerous, as the elections take place while armed regional, tribal, ethnic and ideological sides remain. For these reasons, early elections in Libya might lead back to hostilities, authoritarian regime or being stuck in transition.

But certain conditions could provide more hope for Libya’s elections.

“Decisive victories, demobilization, and peacekeeping, for example, reduce the probability that negative
reactions to the election results will prompt renewed fighting, while powersharing reduces the likelihood of either side to the conflict opposing the election results in the first place,” according to a 2011 study in the Journal of Conflict Resolution.”

Finally, transition to democracy could have been assured and safeguarded if the general elections in Libya were conducted after achieving two key mandates: 1) Disarmament, demobilization and reintegration of former combatants; 2) Resettlement of the internally displaced, the repatriation of refugees and reconciliation.

The NTC will need to have a contingency measure to prepare for the scenario of failed or postponed general elections. However, as Libyans always say: From Libya comes the new and the unexpected. So the success of the first elections in more than four decades remains to be judged.

– The opinions expressed in this commentary are solely those of Mohamed Eljarh.

Topics: Libya • Politics
Next entry »Will Israel's 'king' seek peace deal?
« Previous entryQuiz: Where did Prince Charles stand in as a weatherman?

Next entry »Will Israel's 'king' seek peace deal?
« Previous entryQuiz: Where did Prince Charles stand in as a weatherman?