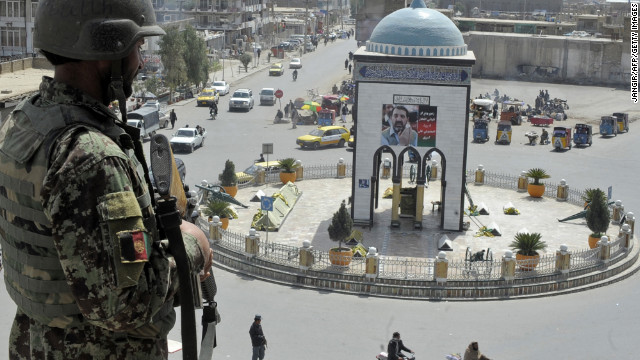 An Afghan National Army soldier stands guard in the main square of Kandahar, Afghanistan.
May 16th, 2012
11:05 AM ET

O'Hanlon: 7 reasons for hope in Afghanistan

Editor's note: Michael O’Hanlon is co-author, with Martin Indyk and Kenneth Lieberthal, of the new book Bending History: Barack Obama’s Foreign Policy. You can read more from him on the Global Public Square. The views expressed in this article are solely those of Michael O'Hanlon.

By Michael O'Hanlon – Special to CNN

The Afghanistan war is a slog at best. There is little doubt about that.

Even those of us supporting the mission must acknowledge that it has been slower and harder than expected. The reasons are generally well known, including a resilient and highly motivated insurgency with sanctuaries in Pakistan; a corruption-ridden Afghan government that, by its poor governance, gives sustenance to the Taliban; and mistakes on the part of NATO, which for years pumped too much poorly regulated cash into a country unable to handle it, fueling corruption in the process.

As NATO leaders gather in Chicago this week for a major summit where Afghanistan will be issue No. 1, it is understandable why their citizens are tired of this effort. And with Osama bin Laden dead and other al Qaeda leaders out of the picture or out of the region, the motivation behind the effort seems less compelling to others as well.

Nothing I saw on a recent trip to Afghanistan dispelled the above realities. But I also saw plenty of good that should give us encouragement.

Because we already have an exit strategy to have most NATO troops out of Afghanistan by the end of 2014, no one needs to worry too much about a possible quagmire.

Beyond that, there are good reasons to think that even if this mission cannot achieve its loftiest earlier goals — a strong democracy and a clearly defeated insurgency on our watch — it can likely attain the minimal acceptable requirement: preventing a Taliban return to power and a major al Qaeda presence on Afghan soil.

Here are some highlights of the more hopeful indicators in Afghanistan:

•  Afghan security forces have almost reached their envisioned full size of 352,000, counting army and police. This has been accomplished despite the fact that the Afghan army and police needed to be built as they were fighting. They are now collectively taking at least twice the casualties of NATO forces, participating in at least 90% of all operations and leading some 40% of operations themselves (albeit usually the simpler ones at this point).

•  While the security forces still suffer from political patronage appointments and corruption, the problems are at least being partially addressed. In the east, some 50 Afghan army leaders have been replaced in the last year; 70 police officers were just recently fired in the west for poor performance. The Ministry of Defense has also opened a full criminal investigation into the problems that produced corruption and theft at Afghanistan’s main military hospital last year. To be sure, such efforts could be too little, too late. There are pockets of serious remaining problems, such as with the country’s air force. And some of the firings and hirings raise concerns of ethnic bias. But on balance, the progress is picking up.

•  The Afghan Local Police, a form of armed community watch overseen by NATO troops, is proving its mettle. These lightly armed and locally organized forces are holding their ground in some 80% of all firefights, even when sometimes outgunned by the Taliban, and they are taking the highest rate of casualties of any part of the Afghan security forces. There have been a handful of cases of abuse within this program, and a number of illegal militias are falsely adopting the name Afghan Local Police to disguise their true nature (which is sometimes to attack their neighboring tribes or communities). But U.S. special forces have monitored and worked with the actual forces effectively and stepped in to address problems when needed. The admittedly daunting challenge in the coming months and years will be to keep growing the program while also gradually handing oversight over to Afghan special forces.

•  Politics are breaking out in Afghanistan. The presidential election is still two years away, but new political organizations are forming, electoral reform movements are gaining steam, and everyone is forming their short lists of the most likely candidates for the race — some of them actually serious reformists! For the first time in its history, Afghanistan is preparing for a peaceful transfer of power accomplished by political competition. We do not yet know, of course, if the process will be successful. But there is political energy in the air.

•  Recent Asia Foundation work suggests that the quality of governance is improving at the provincial level. There are still too many bad actors and too much interference from Kabul in the day-to-day operations of regional governments. But by one scale at least, the average quality of governance has improved at least 10% over the last year.

•  A spirit of hopefulness, more than fear, characterized most of those I spoke with in Kabul recently.Worries about ethnic tension and even the prospect of civil war after the NATO departure have grown over time. But the recent signing of the U.S.-Afghan Strategic Partnership Agreement reassures many that they will not be left to their own darker angels — or the mercy of their neighbors — when NATO’s transition is complete.

•  On the anticorruption front, more than 100 companies or individuals (some of them U.S.-based) have been debarred from working with NATO because of suspicions of corruption or association with enemy elements. This overdue effort requires constant vigilance to be sure that companies or individuals that have been debarred once do not simply reorganize under a different name. But NATO is finally on the job on that matter.

Much still needs to be done, of course.

Land reform, and the prevention of land expropriation by corrupt actors, demands attention.

Electoral watchdog organizations need to be strengthened, and means of possible voting fraud need to be reduced, before 2014; otherwise, cheating and scandal could delegitimize the election outcomes and contribute to more ethnic tension.

The international community needs to find leverage — and communicate its willingness to use that leverage — to maximize the chances that good leadership emerges from that election, conditioning future aid and troop levels on the quality of future Afghan governance.

The army and police still need to get a lot better. Some of the worst of the worst need to be arrested and tried for corrupt ways.

Pakistan needs to help more. Even if true alliance and friendship are unlikely, we at least need Pakistan to behave like the “frenemy” it once was instead of the antagonist it has more recently become.

But all these points are pretty well known. Less well known is all the good happening in Afghanistan. Whether it will be enough in the end is unclear, but there is a lot to build on.

The views expressed in this article are solely those of Michael O'Hanlon.

Next entry »G8 and NATO-athon, with Pakistan at the table
« Previous entryJoffe: Germany makes for nice eurozone 'whipping boy'