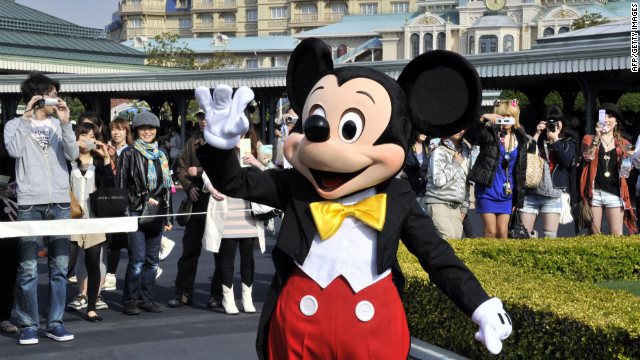 Editor's Note: The following text is from GlobalPost, which provides views — important, moving or just odd — from around the world.

In one respect, the decision by Tokyo Disneyland to allow a gay couple to hold their "wedding" at the theme park is a sign of progress in a country that has, until recently, largely ignored the issue of same-sex unions.

But some campaigners have argued that leaving it to Mickey Mouse to give his blessing to Koyuki Higashi and her partner, Hiroko Masuhara — in a strictly symbolic ceremony — is also a mark of how far Japan has to go before it affords the same rights to the lesbian, gay, bisexual and transgender (LGBT) community as it does to heterosexual couples.

Tokyo Disneyland condoned this and all future same-sex ceremonies after receiving an inquiry from Higashi. Cue a confused response from a subsidiary, Oriental Land Company, which licenses the name and characters from Disney in the United States.

Higashi, 27, and her partner could "marry" at the park, they were told, but only if they dressed "like a man and a woman." Park officials were worried that other visitors might be offended by the sight of two women in wedding dresses or morning suits.

The park relented on dress code after a storm of protest on Twitter and other social media — it had all been a misunderstanding by an individual employee, it said — but the couple will not be allowed to exchange vows in the park's chapel due to "Christian teachings."

More from GPS: Same-sex marriage around the world: Where is it legal?

Those restrictions go to the heart of the flimsy protection offered to the rights of LGBT people in Japan, say campaigners. Homosexuality is not illegal, but same-sex marriages are not legally recognized.

"There needs to be more pressure for legal unions between gay people in Japan," said Taiga Ishikawa, one of only a handful of openly gay politicians in the country. "This is only a guess, but I'd say there are more people now who are in long-term relationships and want that to be recognized in the form of a civil partnership."

Ishikawa is campaigning to introduce an ordinance in the area that would offer some form of marital recognition and increase the number of administrative rights and services to same-sex couples. But he admits that it's "some way off."

If Disneyland was being held up as an agent of progress, one of Japan's most popular celebrities popped up to demonstrate that, in some quarters, ignorance reigns.

Commenting on President Barack Obama's recent declaration of support for gay marriages in the U.S., the film director and comedian Takeshi Kitano told a fellow television guest: "Obama supports gay marriage. You would support marriage between humanoid and animals eventually, then," before questioning the ability of gay couples to raise children.

Kitano has since tried to explain his outburst: "I was only talking about people who love their pets so much that they may think of marrying them," AFP reported him as saying. "There is no way I look at gay people in the same way as I do animals, let alone implying sexual relations with animals."

His comments were not the first with homophobic overtones by a high-profile public figure in Japan. In late 2010, Shintaro Ishihara, the outspoken governor of Tokyo, suggested gay people were "deficient" after watching same-sex couples take part in a parade in San Francisco. "We have even got homosexuals casually appearing even on television," he said. "Japan has become far too untamed."

Yuji Kitamaru, a journalist who writes about LGBT issues, said he was "very disappointed" by Kitano's remarks, particularly as he has spoken up for minorities, including transgender people, in the past.

"I felt it was a big betrayal not only to us and the audience, but also to himself," Kitamaru said. "Public figures like Kitano can easily indulge in that kind of bigotry because Japanese people in general haven't considered the difference between public discourse and private gossip."

Yet Kitamaru, who has written on LGBT issues in Japan for two decades, believes social media has quickly become the forum for a more open discussion about sexuality, citing Twitter's role in the Disneyland decision, and a meeting held in Ni-chome, a gay neighborhood of Tokyo, to thank Obama for his support.

More from GlobalPost: Your body parts, made to order

Higashi and her partner, meanwhile, have visited Disneyland to break their good news to Mickey Mouse. They have yet to set a date for the wedding, and there are reports that their inquiries were intended only to test the theme park's commitment to equality.

"I wrote 10 years ago that I looked forward to the day when gay and lesbian couples could hold hands and go to Tokyo Disneyland, so I'm very happy," he said. "But we're still not at the point where a man or woman can tell people, especially co-workers, that they have a same-sex partner."