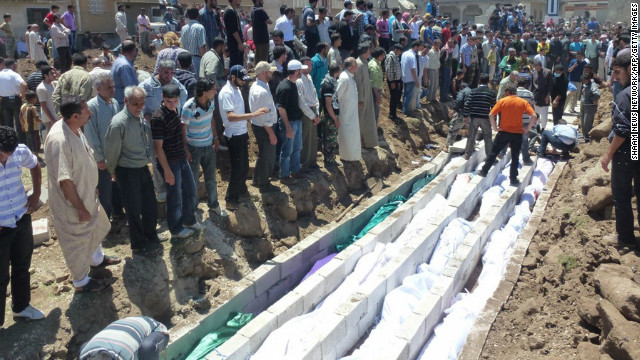 Your Take: Should the U.S. intervene in Syria?

Every time the death toll rises in Syria, the question seems to get louder and louder: Should the U.S. use military force to remove Bashar al-Assad from power?

Fareed Zakaria isn’t so sure. Writing for Time magazine this week, he makes the case that sanctions and embargos are the way to go.

“It would be morally far more satisfying to do something dramatic that would topple Assad tomorrow,” Zakaria said. “But starving his regime might prove the more effective strategy.”

We opened up the debate on Global Public Square to see if readers agree with Zakaria. Many did, many didn’t, but there were interesting points made on both sides.

One common argument is that the U.S. needs to act on humanitarian grounds.

Tim in Minneapolis: “I know that the U.S. is tired of war and conflict, but America will lose its moral compass if we just sit by and watch innocents killed 100 at a time. The United States had the same public disagreement before we entered World War II to help the Europeans, but we had to stop Hitler, we had to stop evil.”

gingersrule1: “If we don't protect freedom worldwide, we might as well give it up here. If you think watching people get murdered and not even lifting a finger to stop it, you become a part of the problem.”

Reader j. von hettlingen pointed out that sanctions might work, but they would hurt everyone in Syria, not just those in power: “Before Assad's loyalists feel the squeeze, ordinary citizens are already bearing the brunt. They have suffered enough and don't have the perseverance to endure more hardship.”

“As an active member of the Syrian opposition, I want Americans to understand that the intervention of the United States is not requested simply because we can't do the job ourselves. We could, if it were Assad alone that we were fighting. But we’re not. We are up against Russia and Iran, who are maintaining a flow of arms and personnel.”

Many of those against intervention said they are tired of the U.S. being “the world’s police” and that America has enough problems already both domestic and abroad.

H: “Syria is not our problem. I sympathize with the Syrian plight, but that is their problem, not ours. We have done enough for the world and still the Arabs blame us. Let some other country like France, Russia or China solve the world's problems, and let's not spill our own blood or money.”

freddy A: “How naïve! Why does anyone think the U.S. has anything to do with the region or rest of the world? BUTT OUT. Fix our own crap. We are friends with Saudi Arabia, which has less human rights than any other Middle East country. Stop being silly. We are not better than anyone else. Let’s educate our children and fix the economy.”

Anonymous010: “The reason we should not be the world's police force is because the world didn't ask or choose us to be its police force; we inappropriately assumed that responsibility all on our own. How would you feel if your neighbor decided he held jurisdiction over your whole neighborhood and started enforcing his own rules and values with a bigger posse and better guns than anybody else in the neighborhood could afford?”

Other readers expressed concern about what would happen after al-Assad was overthrown.

Bruce Hedley: “Military intervention in Syria comes with much more risk than Libya due to the many ethnic/religious groups caught up in this: Arab, Kurd, Turk, Christian, Sunni, Shia, Alawite, Maronite, etc. Regional destabilization is a real possibility, and are we prepared for that?”

mmi16: “There is no group that is in a position to assume leadership and control in Syria once Assad is gone. Taking Assad out would create another Iraq after Saddam. The Syrian opposition needs to unify itself into something that can assert a level of control in the struggle against Assad.”

One comment, made by Ron, acknowledged both sides of the argument and illustrated how complicated the issue is:

“Yes, U.S. military in Syria would not likely work. Most of our major military interventions since Korea have been profoundly unsuccessful.

But on the other hand, what do we do? Nothing? Sit idle while innocents are being killed in great numbers? Isn’t that what America stands for? Should we just look the other way? Or enter with military force to ‘save the oppressed’ even though we know it will ultimately be unsuccessful, involve us in a lengthy and very expensive occupation, and take the lives of many American personnel? Darned if we do, and darned if we don't.”

Do you agree with Ron? Or do you think America is more “darned” with one particular course of action? Let your voice be heard in the comments below.

Editor’s note: Some comments edited for length or clarity.