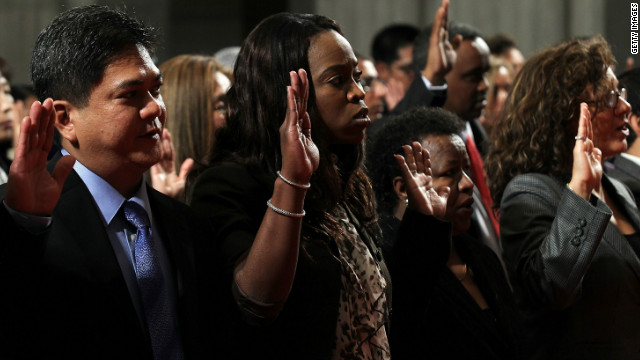 Fareed Zakaria looks at how the immigration systems work – and don't work – in Japan, Europe, Canada and the U.S. in the TV special: "Global Lessons: The GPS Roadmap for Making Immigration Work" on CNN at 8 p.m. ET on Sunday, June 10. Watch on CNN International on Saturday, June 16, at 4 a.m. and 9 p.m. ET

Editor's note: Philippe Legrain is the author of "Immigrants: Your Country Needs Them" and "Aftershock: Reshaping the World Economy After the Crisis." Follow on Twitter @plegrain. The opinions expressed in this commentary are solely those of Philippe Legrain.

By Philippe Legrain, Special to CNN

The world is anything but flat: the biggest determinant of your life chances is not how talented you are or how hard you work, it is where you were born and who your parents are. Anyone lucky enough to have been born in the United States who doubts this should try to imagine how different their life would have been if they had been born in Africa.

Zakaria: Will an immigration deadlock make the U.S. a second-rate nation?

A hard-working entrepreneur born in a remote African village has far fewer opportunities to achieve his dreams than a lazy dimwit born in America. Even if the African seizes all her chances and the American none, the American is still likely to enjoy a more comfortable life. And the surest thing that African could do to transform her (and her family's) life chances is to go and work in the U.S.

But only if governments allow her to. Unfortunately, we live in a system of global apartheid, where the rich and the educated can move about increasingly freely, while the poor are expected to stay put, like serfs tied to the land where they were born.

Can the U.S. learn from other countries' immigration policies?

For the most part, people are oblivious to the injustice of this: it is seen as part of the natural order of things, like slavery once was. But insofar as people try to justify this unnatural and unjust state of affairs, they claim immigration controls are necessary to protect people in rich countries from their poorer brethren. Yet if one thinks a bit more carefully, one realizes that these objections don't stand up.

One objection to allowing women into the workplace was that they would take jobs away from men. But in practice, women have not deprived men of work. Why? Because people don't just take jobs, they also create them, when they spend their wages as well as in complementary lines of work. The same is true, of course, of immigrants.

By the numbers: U.S. immigrants

Another objection is that immigrants will all end up on welfare – as if someone enterprising enough to uproot themselves to move to America will suddenly want to do nothing, even though they could earn more working. Indeed, when immigrants are working, they're accused of stealing "our" jobs and when they're out of work, they're accused of scrounging from the state. They can't win: they're damned if they do and damned if they don't. Such accusations tell us more about critics' prejudices than about immigrants' behavior.

There is also something unpleasant about the notion that governments can – and ought to – select only the seemingly best people to allow in to a country. It is nonsense that we can predict how someone will contribute to a country, let alone how their children will. Who would have guessed that the son of a Kenyan goatherd would end up as U.S. president?

Google, Yahoo!, eBay, Intel and many other companies were all co-founded by people born outside America who arrived not through some clever selection process, but as children. Nobody could have guessed, when he arrived in the United States as a child refugee from the Soviet Union, that Sergey Brin would go on to co-found Google. Had he been denied entry, America would never have realized the opportunity that had been missed. How many potential Sergey Brins do Europe and post-9/11 America turn away or scare off – and at what cost?

As Fareed Zakaria rightly remarked in his book "The Post-American World,": "America has succeeded not because of the ingenuity of its government programs but because of the vigor of its society. It has thrived because it has kept itself open to the world – to goods and services, to ideas and inventions, and, above all to peoples and cultures."

The opinions expressed in this commentary are solely those of Philippe Legrain.

Next entry »Syria’s Christian conundrum
« Previous entryHow much do you know about U.S. immigrants?