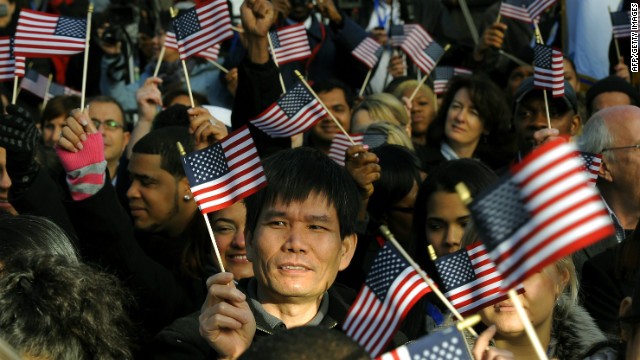 New citizens wave flags before being sworn in during a Naturalization Ceremony in October at the Statue of Liberty.
June 10th, 2012
10:41 AM ET

Immigration lessons for the U.S. from around the world

Fareed Zakaria looks at how the immigration systems work – and don't work – in Japan, Europe, Canada and the U.S. in the TV special: "Global Lessons: The GPS Roadmap for Making Immigration Work" which aired on CNN on Sunday, June 10. Watch on CNN International on Saturday, June 16, at 4 a.m. and 9 p.m. ET

Immigrants founded America hundreds of years ago, coming to the promised land in search of freedom and opportunity, in pursuit of the American dream.

Today, many Americans see immigrants as a danger to that dream.

They worry that immigrants are taking their jobs, using government services and changing the country's national identity. The average American believes that 39% of the U.S. population was born abroad. The real figure is 13%, still the highest level since 1920.

Related: How much do you know about U.S. immigration?

Immigration is divisive, a wedge issue in this election year. But most Americans (73%) agree that the government is doing a poor job of managing it.

So, how should the U.S. handle immigration? Does anyone else do it better? What can the U.S. learn from successes – and possible mistakes – from other countries?

Japan has one of the strictest immigration policies in the world and has historically been closed off to outsiders. It has a foreign population of less than 2% - six times smaller than the percentage of the U.S.

But what are the effects of keeping foreigners out?

Japan is facing an alarming labor shortage, says Robert Guest, the business editor of The Economist and author of "Borderless Economics."

Japan’s current population is around a 127 million. It’s on pace to be just 90 million by 2050, a drop-off of almost one-third. The nation is also aging. Almost one in four people are 65 or older – making Japan the oldest country on earth.

Guest says there’s a solution to the labor shortage: open the borders and invite more immigrants.

But that idea has hurdles.

In its health care sector, for example, Japan is estimated to be short almost 900,000 workers 2025. It started to invite foreign nurses, and since 2008 almost 600 have come to Japan.

But only 66 have passed Japan’s notoriously difficult nursing proficiency exam, which requires an expertise in written Japanese.

And it’s not just foreign workers who might run into obstacles. In some cases, it’s immigrants who have been living in Japan for decades.

But in 2009, with unemployment running high, Japan actually offered money to them to leave the country – $3,000 for each worker to cover travel expenses.

And the flight was essentially a one-way ticket – anyone who took the offer couldn’t come back to Japan with the residence status they once had.

The government says it was only trying to help unemployed Japanese-Brazilians. They’ve stopped offering the deal and are reconsidering the residence status of those who took the money.

So if Japan won’t let in immigrants, what is it doing about its labor shortage?

It’s encouraging families to have more children, giving them $165 a month for each child. But that hasn’t been enough to inspire a growth spurt.

It’s easy to forget that the European Union itself is one of the most ambitious migration experiments in history. Half a billion people are allowed to roam freely within the EU’s borders.

Many predicted that swarms of people from poorer nations like Poland and Romania would move to rich countries like Germany and France. That never happened – only 3% of working-age EU citizens live in a different EU country.

But the EU has not dealt well with immigrants from outside its borders.

There’s been a nasty political backlash – with anti-immigrant parties thriving in Greece, the Netherlands and France.

Rather than rejecting these extremists, Europe’s mainstream politicians have pandered to them. Former French President Nicholas Sarkozy, British Prime Minister David Cameron and Chancellor Angela Merkel of Germany have all declared that multiculturalism in their countries is a failure.

“They all agree multiculturalism is dead,” says Chem Ozdemir, born in Germany to Turkish migrant workers. “It's amazing that they agree on that, but they do not agree when it comes to euro and on other issues.”

Now, he helps his nation to answer a very basic question: What does it mean to be German?

Jonathan Laurence, author of “The Emancipation of Europe’s Muslims,” is hopeful on Islam’s place in Europe. In a GPS guest post this week, Laurence writes:

The key development is that as the proportion of Muslims of foreign nationality residing in Europe decreases – because the number of native-born Muslims is growing – Europe’s democratic political institutions are increasingly kicking in. For decades, the absence of integration policy allowed foreign governments and transnational movements to capture the religious and political interests of this new minority. This wasn’t multiculturalism so much as indifference.

The series of terrorist attacks against Western capitals from 2001-2005, however, in combination with high unemployment and educational under-performance, ended Europeans’ hands-off approach. After leaving them outside domestic institutions for decades, governments gradually took ownership of their Muslim populations. Authorities began to treat Islam as a domestic religion and encouraged Muslims to embrace national citizenship.

In Germany, for example, the government has met with Muslim leaders at an annual German Islam conference since 2006, in an effort to better integrate Muslims with the rest of the population.

Germany and others are certainly making strides, but throughout Europe, there are still obstacles to immigrants’ inclusion.

So, is there any nation that’s getting immigration right?

CANADA: GETTING IT RIGHT

If Japan’s strict immigration policy serves as a cautionary tale and Europe’s experiment is still a work in progress, then take a look at Canada – a nation with more foreign-born per capita than the United States.

Canada may not have the cache the U.S. does – but it holds great appeal for would-be immigrants, says The Economist’s Guest.

“Canada offers many of the same things that America does – a very high standard of living, the rule of law, peace, safety,” he says.

To determine whom it should let in to live and work, Canada uses a point system. You don't even need a job or employer, just skills. Applicants are awarded points for proficiency in education, languages and job experience.

Just why is Canada so ready to accept immigrants with open arms?

Because it has to be.

The nation is sparsely populated, has a low birth rate, and needs immigrants for population growth – and economic growth.

The country brings in the majority of foreigners to fill labor holes.

Only 22% of its immigration was for family reasons: reuniting mothers with children, brothers with sisters, grandparents with grandchildren.

In the U.S., the opposite is true. Only 13% of green cards last year were doled out for economic reasons, while two-thirds were for family reunions.

When Nahed Nenshi became the first Muslim mayor of a major Canadian city in 2010, he shattered Calgary's "redneck" stereotype.

“When I was running for office, it was only people who were not from here who said ‘Whoa, is Calgary ready for a mayor like that?’” he says. “The people in Calgary just said, ‘Ah, it's a kid from the East End. We know him.’"

Canada’s real challenge, says Nenshi, is ensuring the economic and social integration of immigrants once they are living in the country.

“It's not about burkas and kirpans. It's about saying to an engineer who was trained in Iran or China, how can we get you working as an engineer instead of a janitor as quickly as possible?” he says. “These are very serious challenges. And we haven't got it right. But I would much prefer we focus our energies there rather than on these meaningless culture war discussions that occasionally crop up ... because those don't make a difference in people's lives.”

The public and Parliament in Canada generally support continued immigration. “Immigration is unambiguously good for the economy. We know that those folks come, they invest here, they create jobs, they work here,” says Nenshi. “There's not much of a policy debate on that in Canada."

While the prime minister of Great Britain, the former president of France and the chancellor of Germany have all declared that in their context multiculturalism has failed, that's not so in Canada, says Nenshi.

FUTURE IN THE U.S.

Canada and also Australia now have smart immigration policies that take in talented foreigners who have skills the country needs and determination and drive to succeed.

As a result, they have transformed themselves into immigrant countries, with a foreign-born population that is higher than the United States.

Australia, which only 15 years ago had strong strains of nativism and xenophobia dominating its political culture, now has more than a quarter of its population as foreign born – double America’s share – and is thriving because of the economic growth and cultural diversity.

Canada's foreign-born population is almost 20%; the U.S. is 13%, just a little higher than Great Britain's.

The United States is not the world's only – nor the largest – immigrant society anymore.

And that will have consequences economically, culturally and in other ways, says Fareed Zakaria:

It's a sad state, because the U.S. remains a model for the world. It is the global melting pot, the place where a universal nation is being created. We may not do immigration better than everyone else anymore, but we do assimilation better than anyone else. People from all over the world come to this country and, almost magically, become Americans.

They - I should say we - come to the country with drive and dedication and over time develop a fierce love for America. This infusion of talent, hard work and patriotism has kept the country vital for the past two centuries. And if we can renew it, it will keep America vital in the 21st century as well.

What do you think? What can the U.S. learn from other countries' immigration policies? Share your comments below and check out some past responses.

Or see what Kansas Secretary of State Kris Kobach has to say, from this excerpt from "Global Lessons: The GPS Roadmap for Making Immigration Work"