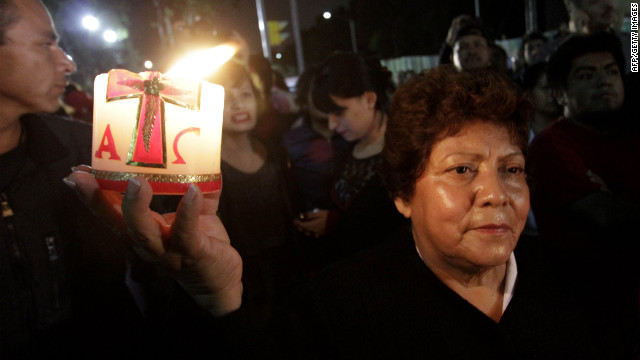 Supporters of candidate Andres Manuel Lopez Obrador listen his press conference in the street in Mexico City on Sunday.
July 2nd, 2012
07:19 AM ET

8 things the U.S. election system could learn from Mexico's

Editor's note: Robert A. Pastor is professor and co-director of the Center for Democracy and Election Management at American University and author of "The North American Idea: A Vision of a Continental Future." The views expressed in this article are solely those of Robert A. Pastor.

By Robert A. Pastor, Special to CNN

The main question asked about the Mexican presidential elections on July 1 is whether victory by the Institutional Revolutionary Party (PRI) means that Mexico will return to its authoritarian past.

The answer is simple: The PRI has changed because Mexico has changed. For more than six decades, the PRI manipulated elections and ruled Mexico in a quasi-authoritarian system. However, between 1988 until 2000, two Mexican presidents – Carlos Salinas de Gortari and Ernesto Zedillo – gradually responded to internal and external pressures and opened the economy and the political system.

I have observed elections in Mexico since 1986 and witnessed the transformation of the election system from the worst to the best in the Americas. The projected victory by PRI candidate Enrique Peña Nieto will not turn Mexico backwards. Mexicans have chosen democracy, and after two terms under PAN presidents, they are voting for change.

Indeed, in this year when the United States is engaged in a ferocious campaign for the presidency, the question that ought to be asked is: How does the U.S. electoral system compare to Mexico's? I undertook a comprehensive study of the electoral systems in North America, and the good news is that the United States came in third. The bad news is that there are only three countries in North America.

In fact, the Mexican electoral system is much fairer, professional, independent and non-partisan than the U.S. system on all eight criteria for assessing election administration:

1. Nonpartisan election administration. Mexico's Federal Electoral Institute (IFE) is a nonpartisan, professional institution in which political party representatives have access but no control. IFE manages a nation-wide system with uniform rules. In contrast, the United States has 13,000 counties and municipalities that manage our national elections with different rules and less capacity. Partisan officials generally control the process, and in a close election, the opposition is often suspicious of the result.

Follow the Mexican election coverage in Spanish at CNNMéxico.com

2. Registration and identification of voters. IFE actively registers about 95% of 77 million eligible voters and gives each a biometric, photo ID card, which Mexicans use as a primary identification. The registration list is audited regularly, and the photos of the voters are on the list in each polling site.

In contrast, U.S. states and communities passively register about 55% of eligible voters, and the lists are flawed with many duplicates and errors, especially between states and counties. Each state has different rules, and in states where Republicans have a majority, their focus on preventing electoral fraud has led them to restrict registration and require IDs, while Democrats are more concerned about voters' access and believe the Republican ID laws are aimed to suppress voter turnout from poor people or minorities. The truth is that we ought to adopt Mexico's national, biometric ID system. That would eliminate duplicates and simplify the registration and voting process.

3. Poll workers. Mexico views the conduct of elections like Americans view jury duty – a civic obligation – and they recruit on a random basis a large number of people from each district. They are well-trained in every stage of the electoral process. When I asked a U.S. election official about the criteria for choosing poll workers, he said: "I'll take anyone with a pulse." Most poll workers are very senior citizens without the kind of stamina necessary to manage a polling station for 12 hours, and in most cases, they are poorly trained as compared to their Mexican counterparts.

4. Campaign finance/corruption. Each of Mexico's main political parties receive approximately $24 million of public financing for a three-month campaign. They can also receive 10% of their funds from supporters, but no one can give more than $71,000. In contrast, in the United States, there will be an estimated $6 billion raised privately, and with the Citizens United Supreme Court decision, corporations can spend unlimited amounts of money. Major contributors could have extraordinary access and substantial influence over public policy. Some would define that as corruption on a scale that even the drug cartels couldn't compete.

6. Neutralizing incumbency. Since its revolution, Mexico's constitution prohibits re-election in order to prevent incumbents from using government to manipulate the electoral process. IFE goes even further by trying to prevent the president from even campaigning in the most indirect way for his party's candidates. In the United States, incumbents have a huge advantage in fund-raising because special interests can contribute to members of Congress while they are writing laws.

7. Judging disputes. Mexico has minutely-detailed election laws, and a professional and independent Electoral Tribunal to judge election disputes. The United States has few laws and no court with the expertise to settle such disputes.

8. Observers. Mexico invites international polling observers while the U.S. government does not welcome any international observers, and only two states allow them.

It was partly because of decades of electoral fraud that the Mexican people decided to construct a completely professional, independent and nonpartisan election organization. This has not eliminated all problems, but as compared to the thousands of complaints received by U.S. election authorities, the concerns from Mexico are minor.

A measure of commitment is that Mexico's IFE spends roughly 10 times more per capita than the United States to manage a state-of-the-art electoral process. The U.S. system is so antiquated, decentralized, dysfunctional, under-funded with public resources, and over-funded with private interest money that it behooves us Americans to stop asking whether the PRI is a return to the past in Mexico and to start asking why can't our electoral system be as good as Mexico's.

The U.S. could and the U.S. should establish an independent national nonpartisan election administration with a national biometric ID, a single national (or inter-operable) registration list, restrictions on private funding, public financing for short campaigns, poll workers that are recruited by lot and well-trained, disincentives for negative advertising, independent electoral courts, and international and domestic observers. There is much work for us to do before we can catch up to Mexico.

– The views expressed in this article are solely those of Robert A. Pastor.

Related: Fareed Zakaria on why Mexico is on the rise

Topics: Elections • Mexico • Politics
Next entry »How will PRI's win change the U.S.-Mexico relationship?
« Previous entryQuiz: What does "Tiangong" mean?

Next entry »How will PRI's win change the U.S.-Mexico relationship?
« Previous entryQuiz: What does "Tiangong" mean?

You can get a smart fifty year history in a few minutes! @ForeignPolicy twitter.com/foreignpolicy/…
fareedzakaria

9:58 am ET January 16, 2021 RETWEET
… I’ll @milleridrissriss about America’s far-right extremists—who they are, what motivates them, & the threat they pose …
fareedzakaria