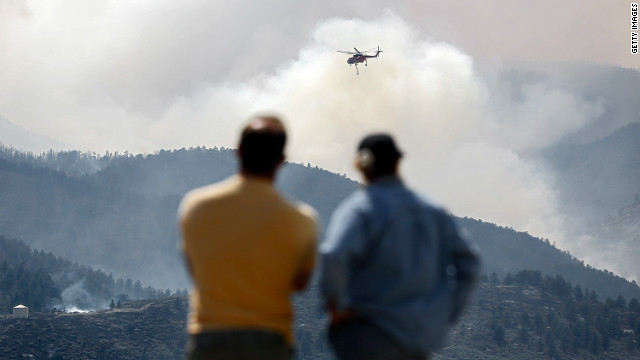 A firefighting helicopter prepares to drop water on a wildfire in Colorado this month.
July 12th, 2012
05:09 PM ET

Editor's note: Micah Zenko is a fellow for conflict prevention at the Council on Foreign Relations. The views expressed are his own. This article originally appeared at CFR.org.

“Oppressive Heat,” “Chimp Attacks,” “Sharks,” “Forest Fires,” “Africanized Bees,” “Death by Drowning.” These hard-hitting reports have been staples of the mainstream media since Publick Occurrences: Both Forreign and Domestick first hit the presses in September 1690. Today, news broadcasts and reality television depict harrowing tales of the enemy that Americans must collectively fear and face: nature.

Outside of our climate-controlled studio apartments, McMansions, and office cubicles, nature doesn’t simply exist, but happens to us: sharks choose to swim dangerously close to popular beaches, chimpanzees lure humans into their cages, and forest fires and raging floods dare to strike picturesque neighborhoods, and pools (or watery graves) rest in backyards, beckoning humans to dive in.

Beyond our personal safety and peace of mind, nature poses a threat to critical infrastructures once exclusively targeted by al-Qaeda. Solar flares (or God’s Electromagnetic Pulse) disrupting the electric grid is “arguably the largest natural-disaster scenario that the nation could face.” That’s no joke. A 2008 study by the National Academy of Sciences estimated that a “severe geomagnetic storm scenario” could cost the United States up to $2 trillion in the first year, as compared to its “weakling” cousins Hurricane Katrina (roughly $125 billion) or the 2003 blackout in the northeast ($10 billion, or the equivalent of a month of war in Afghanistan).

Despite the catchy headlines, nature slew a paltry 3,168 Americans – or 1.2 percent of all deaths – in 2008 (the most recently updated data). In comparison, Americans are nearly eleven times more likely to die in an automobile accident than fall victim to nature. And a stickler could point out that more than 80 percent of all forest fires are started by humans, virtually all climate scientists attribute global warming to human activities, and that the installation of a four-sided fence around a pool reduces the likelihood of children drowning by 83 percent. Such statistics are nature’s way of seducing you into the antiquated notions that we have agency over our lives and that protecting the earth is a shared societal responsibility.

To get a sense of the scope of this scourge, see below for Mother Nature’s kill list (click to expand), and how it compares with the relatively overblown (albeit very real) threats of noncommunicable diseases, firearms, and automobiles. So the next time you’re thinking about going for a drive to your favorite restaurant or shooting range, play it safe and stay indoors.