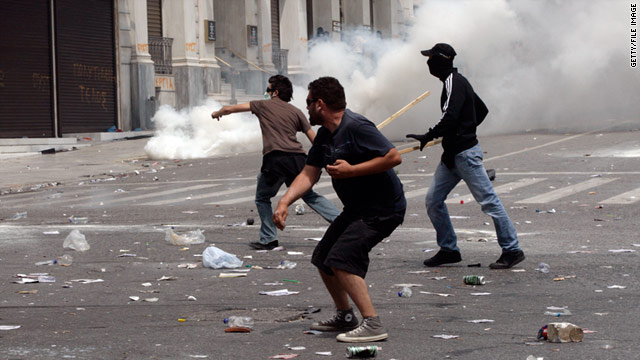 By Jan Egeland and Judith Sunderland, Special to CNN

Editor’s note: Jan Egeland is the Europe director of Human Rights Watch. Judith Sunderland is senior Western Europe researcher and author of the new Human Rights Watch report, “Hate on the streets: xenophobic violence in Greece.” The views expressed are solely those of the authors.

“I realized it is so easy to die here. We came from so far away and it is so easy to get killed here,” Ali Rahimi, an Afghan asylum seeker, told us after he was stabbed five times in the torso in September 2011.

Ali is just one of many victims of violence in Greece. Amid the economic crisis and rising social tension, migrants and asylum seekers have become the targets of xenophobic rage.  While researching our latest report we spoke to dozens of foreigners, including two pregnant women, who had been beaten, kicked, dragged off buses, and chased down the streets of Athens in recent months. Since late May alone, the media have reported seven brutal attacks. But many, like our Somali interpreter Saleh Ibrahim, whose hand was broken in an assault in late June, never report the violence.

Ali’s experience is a depressingly familiar story. He and a group of fellow Afghans were attacked in the Agios Panteleimonas neighborhood of central Athens by a large mob wielding bottles. This is a neighborhood known to migrants and asylum seekers as a place to avoid, where a “citizens group” formed several years ago to “protect” residents. Human Rights Watch documented numerous attacks in this location.

The only unusual aspect to Ali’s story is that his alleged attackers were arrested. Most victims face significant obstacles in seeking justice. The police discourage many victims from filing complaints, telling them it’s not worth it, to fight back themselves, or, in the case of undocumented migrants, that they could be locked up themselves. Those who insist face a 100 euro fee to file an official complaint. Arrests for several attacks in June stand as a stark exception to the rule of police inaction.

Despite being put on a fast track, the trial of two men and one woman for Ali’s stabbing has been postponed six times – it’s now scheduled for September – and it’s still unclear whether the prosecutor will argue that the attack was racially motivated. To date, no one has been convicted under the hate crime law Greece adopted almost four years ago.

There’s no excuse for vigilante violence, or for the failure of the police, the courts and government to take the problem seriously. There are, perhaps, some explanations.

There is no doubt that Greece faces migration pressure. An estimated as many as 300 undocumented migrants enter Greece every day from Turkey. Though most migrants and asylum seekers hope to travel to other European countries, EU rules mean that Greece is obliged to prevent that travel and to process all asylum claims. With its dysfunctional asylum system unable to cope, Greece has become for migrants what one Sudanese man described as “a very large prison.”

This ancient civilization shouldn’t be allowed to regress into institutionalized violence against migrants. The EU needs to do more to guarantee basic human rights for those who enter the continent in its southeast with hopes of a better and safer life.

An influx of destitute migrants living on the streets has brought disconcerting change to Greek cities, particularly in Athens. Concerns about rising crime and urban degradation were high on the agenda in the lead-up to recent national elections. Nationalist, far right-wing parties such as Golden Dawn have in recent years gained strength and popularity largely because of their exploitation of anti-immigrant sentiment, winning enough votes in the May and June 2012 national elections to enter parliament for the first time in its history. It now has 18 seats.

There are indications that Golden Dawn members or sympathizers are involved in attacks on migrants and asylum seekers, although nothing to indicate the party is organizing or directing them. The woman standing trial for Ali’s stabbing ran – unsuccessfully – for office in the recent national elections on the Golden Dawn ticket. Three other party members were questioned in early June in connection with violence against migrants on the margins of a Golden Dawn demonstration although none was charged. Party member have been implicated in other attacks.

Widespread suffering amid deep economic hardship and unfair EU asylum rules do not, however, let Greece off the hook. The new government led by Antonis Samaras needs to take forceful steps to counter xenophobic violence. That includes ensuring that police take preventive action, diligently record and respond to reports of xenophobic attacks, and guarantee that victims have genuine access to justice. The EU also has a role to play by helping Greece with technical and financial assistance.

Violence has become such a part of daily life for migrants and asylum seekers in Greece that an Afghan community festival in May included a skit about a man being brutally beaten in a park by Greek racists. We hope at the next festival time we see a play about justice being done for the victims of hatred.

Topics: Europe • Greece
Next entry »Why Syria could get even uglier
« Previous entryJoseph Kony: Always one step ahead

Next entry »Why Syria could get even uglier
« Previous entryJoseph Kony: Always one step ahead