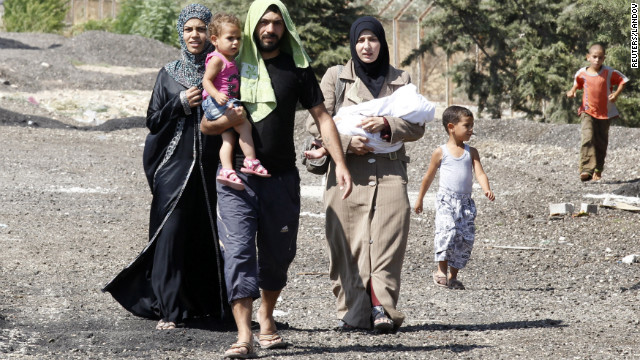 By Sherif Elsayed-Ali, Special to CNN

Sherif Elsayed-Ali is head of refugee and migrants’ rights at the International Secretariat of Amnesty International. The views expressed are his own.

A tense political situation deteriorates; violence rapidly escalates with dire effects on the civilian population – people are killed indiscriminately, property is destroyed and what starts as a slow trickle of refugees into neighboring countries becomes a mass displacement.

And there’s a tragic irony because Syria is not only Iraq's immediate neighbor, but also a country that was host to more than one million Iraqi refugee at the height of the displacement crisis.

It's not only Syrians that are leaving everything behind to flee the horrors of war. It’s also the Iraqi and Palestinian refugees and others who had found safety in Syria, now twice displaced.

I returned from Jordan last week, where I was looking into the situation of refugees from Syria. The journey out of Syria is rife with dangers. To make it into Jordan, refugees have to go through areas filled with Syrian military troops. Typically, the Free Syrian Army (FSA) escorts them while they sneak between military outposts and until they reach the Syrian side of the border with Jordan.

If they are discovered – and it happens – they are shot at with heavy gunfire. Refugees report that the shooting is indiscriminate; single men or families with children, all are targeted. That people continue to take these risks is testament to what  they have suffered and witnessed.

UNHCR, the U.N. refugee agency, has so far registered more than 35,000 Syrians in Jordan, but the unofficial total is believed to be much higher.

In Syria itself, the number of those displaced is estimated at between one and one and a half million, in a country of 22 million people. In four of Syria’s neighbors including Jordan, plus Lebanon, Iraq and Turkey, about 120,000 Syrian refugees have been registered by the United Nations, but again the actual number, including those unregistered, is much higher.

Badly hit neighborhoods, even whole towns, have seen a mass exodus – sometimes within Syria, sometimes with people making the perilous journey across borders.

Inkhil, a town of about 30,000 people in the Dera’a governorate has been one of the worst hit. Those who fled describe continuous, indiscriminate shelling in the past few weeks.

People have been taken from their homes by government forces and militias, in front of their families, and executed within earshot. There are reports of mainly men, but also women, being abducted and subjected to enforced disappearances.

So far, borders have largely remained open to refugees from Syria and must remain so. Recent statements from Iraqi and Jordanian leaders that this remains the case are reassuring. Worrying, though, was a statement attributed to the Israeli Defense Minister on July 19, where he stated his intention to prevent “waves of refugees” fleeing increasing violence and widespread human right abuses in Syria, from entering Israel via the Israeli-occupied area of the Golan Heights.

Countries must allow refugees fleeing war and persecution to enter their country and reach safety, be they Syrian nationals or others residing in Syria, such as Palestinian refugees. It is a legal obligation, not just a moral one.

But neighboring countries shouldn’t have to bear the humanitarian effort on their own. There’s a real economic and resource impact on countries from sudden, large scale refugee flows.

Local schools and health facilities have to accommodate thousands that weren’t planned for, and there’s increased demand for employment. Jordan, for example, is also suffering from serious energy and water constraints.

There have been promising signs in recent days, such as a pledge by the United States that it will give Jordan $100 million, in part to help host Syrian refugees, and another pledge for a similar sum by the Arab League.

Yet, as of July 24, the $192 million U.N. Regional Response Plan for Syrian Refugees was only 26 percent funded. Another U.N. humanitarian appeal to support Syrians inside their country had, as of July 20, only received $38 million of the $180 million needed. What are the countries that purport to support the Syrian people waiting for?

Countries with the means to do so – in the Gulf, Europe, North America and elsewhere – should fund the humanitarian appeals for the Syria situation.

And they should do it now. They should increase direct support to neighboring countries to help them provide adequate reception for all refugees from Syria and adequate assistance to the communities hosting them.

No one knows when the conflict in Syria will end, and when it does, no one knows whether it will be safe for displaced Syrians to return. Even if the conflict in Syria ended tomorrow and it was safe for refugees to return, the process wouldn’t be quick. Infrastructure has to be rehabilitated and homes rebuilt. Schools, hospitals and local services have to start operating again. This is a crisis that needs long term commitment and neighboring countries should not bear the brunt of it on their own.

Many of the refugees I talked to complained that for the past 18 months, there has been nothing but empty words. They asked what the international community has done for the Syrian people?

The very least it can do is help those who escaped to live in dignity.