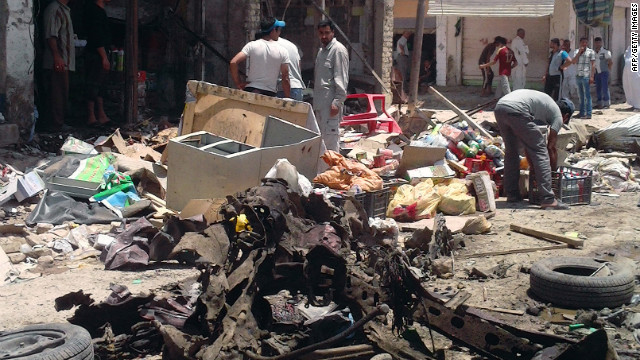 By Joost Hiltermann, Special to CNN

Joost Hiltermann is deputy program director for the Middle East and North Africa at the International Crisis Group. The views expressed are the writer's own.

With all eyes trained on Syria’s unfolding civil war, the only headline-grabbing news to emerge from the former battleground, Iraq, concerned a fresh wave of violence. Last week, well over a hundred Iraqis were killed and several hundred injured in a series of attacks throughout the country that were claimed by Iraq’s al Qaeda franchise, the Islamic State of Iraq. Its leader, Abu Bakr al-Baghdadi, had warned of what was to come the day before, announcing a “Breaking the Walls” campaign. On Thursday, Islamic State militants battled with security forces for the first time in years, succeeding even in bringing down a helicopter. It looks as if, having been driven out of most of the areas they controlled and dealt a body blow during the U.S. surge in 2007-08,  al Qaeda is rebounding and launching its own military surge now that U.S. troops have gone.

It’s easy to be distracted by an uptick in violence in Iraq and ignore the larger political crisis in which al Qaeda, however diminished in its capabilities, can operate with apparent impunity. Despite last week’s events, violence has been at a steady level since 2008 – too high for sure to those caught up in the spasms that occur, but sufficiently low to nonetheless convey a general sense of stability – a vast improvement over the days of sectarian fighting some years ago. Spectacular attacks have punctuated a pattern of declining violent incidents, causing mass casualties even as overall casualty levels have gone down. Shia militias, which mainly targeted the U.S. presence, put their guns back under their beds after the military component of that presence came to an end late last year.

Violent actors such as al Qaeda are likely to be around for some time, but without a political crisis, they could be contained. Iraqi security forces are still in the early stages of their development (after the Bush administration disposed of the former regime’s army wholesale), and still exhibit clear vulnerabilities, especially in intelligence gathering and coordination that could prevent violent attacks, as well as in their explosives-detection capacity at checkpoints. (Security officers employ a piece of equipment that Western experts and journalists have referred to as a “divining rod” or “magic wand” for its inability to detect anything.) Rome wasn’t built in a day, and neither will be Iraq, nor its security forces. Yet by and large, these forces have been able to prevent a serious resurgence of violence.

What matters in Iraq today isn’t so much its sporadic violence, however spectacular in nature, as the total absence of basic consensus over how the country should be run, as deepening discord could trigger a new round of civil war.

The latest crisis began when judicial authorities issued an arrest warrant against Vice President Tareq al-Hashimi last December. He and other Sunni leaders had fallen out with Prime Minister Nuri al-Maliki, accusing him of amassing power and cutting them out. Things deteriorated sharply from then on, and by April, Maliki’s erstwhile governing partners were openly calling for his removal via a parliamentary no-confidence vote. Many meetings later, these same leaders have signally failed in their objective, with Maliki firmly in place and his opponents lacking a strategy to call him to account, much less get rid of him by democratic means. They haven’t given up, though, and so the standoff continues, with no prospect of its being resolved any time soon.

Maliki may have won this round – he survived – but all Iraqis lost, as political stalemate is further hampering governance. General elections should take place only two years from now, but with Baghdad all wound up in a knot, campaigning effectively has started, sucking up all the air. Parliament, in which Maliki’s enemies are well represented, does very little; its legislative record is disappointing, and it now faces the daunting task of swiftly passing pivotal laws, including for provincial and parliamentary elections, as well as the regulation of political parties, if the next elections are to have any chance of occurring on time and succeeding.

To stick with the Rome metaphor, it’s as if instead of rebuilding Iraq, politicians are fiddling as the embers of conflict are being relit. They are expert tacticians, masters at the art of political survival, but bereft of a vision for the country, unable to lay out a strategy that could parlay today’s relative calm into economic progress and a fair share in Iraq’s immense oil wealth for everyone.

In this unhappy state of affairs, the Syrian crisis threatens to exacerbate political tensions in Iraq and give them a renewed sectarian cast. As the minority-based Assad regime goes down, Syria’s Sunnis are certain to rise, re-empowering Iraq’s Sunnis, who have felt marginalized since 2003. Shiite perceptions of a looming Sunni alliance of Gulf states, Turkey, and a new Syria arrayed against the remaining Shia-run bastion of Iran and Iraq – with the intent of bringing down Maliki to deal a further blow to Iran’s influence in the region – are increasing sectarian polarization in Iraq. This is the perfect breeding ground for groups such as al Qaeda, which may find it easier to recruit in Sunni quarters, finding deep frustration and grievance, but also new Syria-inspired hope that the tide is again turning in their favor.

If Iraqis are to avoid another civil war, once again led by al Qaeda but this time catalyzed by events in Syria, they should put their own house in order posthaste. Only by restoring basic consensus about how to run the country and by putting in place a workable power-sharing arrangement as they intended two years ago will they be able to contain and eventually stamp out violent actors and begin moving toward more effective governance.

Topics: Iraq • Terrorism
Next entry »The danger of the do-nothing Congress
« Previous entryIf Poland was voting, Obama would probably win

Click here to cancel reply.
Next entry »The danger of the do-nothing Congress
« Previous entryIf Poland was voting, Obama would probably win