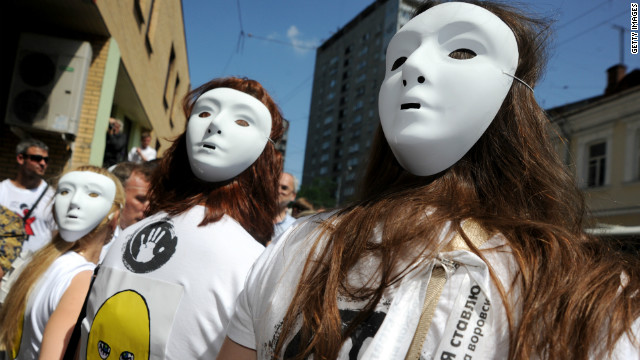 What Pussy Riot teaches us

By Olga Oliker, Special to CNN

Pussy Riot has been everywhere. The blogosphere has been awash for weeks in demands that the three jailed members of this Russian performance art collective be freed. Yesterday, a Russian court rejected those demands.

Maria Alekhina, Nadezhda Tolokonnikova and Yekaterina Samutsevich, imprisoned since March on charges of hooliganism motivated by religious hatred, were found guilty and sentenced to two years imprisonment each. But while Amnesty International has declared the three “prisoners of conscience,” Madonna got far more attention for their cause by displaying the group’s name on her back at a recent Moscow concert.

Indeed, few Western musicians have taken the stage recently without making some gesture in support of Pussy Riot, which takes aesthetic inspiration from the American riot grrrl feminist musical movement of the 1990s.  In just a few weeks, Pussy Riot has become the balaclava-clad face of Russian political oppression for many in the West, drawing tremendous attention to their cause and doubtless having an impact on the sentence, if not the verdict.

In contrast, the broader opposition movement in Russia, reinvigorated during this past winter’s presidential election process and now under fire from the 100-day-old regime, has received dwindling press attention. Pussy Riot’s members faced up to seven years in prison if convicted. But their (bluntly phrased) political message urging accountability and equality remains in more danger than they ever were.  This is in part because the Russian opposition as a whole has failed to capitalize on the attention these artists have received.

Membership in Pussy Riot is fluid, with different members taking part in different actions, all wearing brightly colored ski masks to protect their identities.  The group’s modus operandi is to stage brief performances in public places, singing along and miming guitar playing to pre-recorded songs.  They then post video of these events to the internet.  Their song lyrics, as transcribed on the freepussyriot.org website (in English but, curiously, not Russian) insult Russian President Vladimir Putin and his government, call for his ouster, and exhort protest, feminism, and gay rights.

In February, a Pussy Riot action took place at the Christ the Savior Cathedral in Moscow.  The song performed, “Punk Prayer,” critiques the close ties between the Russian Orthodox Church and the state in colorful language.  The performance lasted for about a minute, until the group was escorted out by security.  The slightly longer video crafted from footage of this event went viral, however, and Church leadership protested, leading to the March 4 arrests-and perhaps making the song’s point.

It seems unlikely that Russian authorities realized that the Pussy Riot trial would gain this sort of international attention. Arrests of opposition figures more typically elicit sharp language from human rights groups rather than rock stars. The entire thing proved sufficiently embarrassing that Putin himself suggested that the women should not be “judged too severely.”

The international outcry to free Pussy Riot was no doubt driven in part by the fact that artists with a political message are part of a long tradition globally and in Russia itself.  Artists and musicians were also appalled by what seems an unduly harsh response to Pussy Riot's behavior (offensive though it may have been).  Thus, the anger over Pussy Riot’s jailing hinged on two factors: free speech and excessive punishment.

This all but ignored the broader protest movement, in which tens of thousands of urban middle class Russians took to the streets to voice their frustration with a lack of representative, accountable government. With Putin back as president, the state has pushed back on these activities, arresting protesters and threatening or pressing criminal charges against prominent activists and their supporters. In the meantime, the movement itself has had difficulty gelling, lacking either clear leadership or a solid platform with appeal to large numbers of Russians.

The Pussy Riot phenomenon would seem to present an opportunity to draw more global attention to Russia’s opposition, help it develop a cohesive agenda, and perhaps channel foreign support toward efforts to make Russia as a whole freer.  But this hasn’t happened.

The Russian opposition – along with much of Russian society – finds Pussy Riot’s language, tactics and overt championing of feminism and gay rights too extreme. The group’s foreign supporters, for their part, know little about Russia’s political and social context. The result was a focus in Russia and abroad on the women themselves and leniency towards them, not their message or that of the opposition as a whole.

Sadly, this means today’s sentence, while almost certain to be appealed, will soon enough be followed by a dissipation of foreign interest and a return to business as usual. But the global attention drawn by Pussy Riot shows what is possible in an interconnected world.  Opposition movements in Russia and elsewhere may take note and think about how to better harness such possibilities in the future.