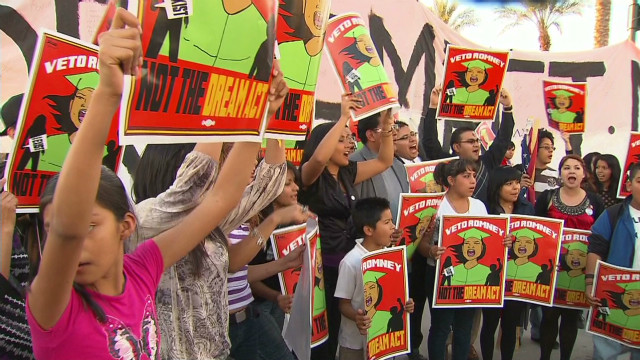 By Marshall Fitz, Special to CNN

Marshall Fitz is the director of immigration policy at American Progress Action Fund. The views expressed are his own.

Even before Hurricane Isaac forced the reconfiguration of the Republican Party convention, party leaders were scrambling to confront a looming storm surge: The demographic wave rapidly reshaping the national electorate. Hispanics are the fastest growing group of voters in the United States and they will soon make up the majority of new voters in battleground states. Party influentials like Florida Governor Jeb Bush have started to sound the alarm, calling his party’s posture towards Latinos “stupid.”

But national polling shows Governor Mitt Romney on course to earn an even smaller share of this growing group of voters than the last GOP candidate, John McCain. A tracking poll released this week reveals Mitt Romney trailing President Barack Obama 26 percent to 65 percent among Latino registered voters. If Romney wants to close that gap, he’s going to need a better position on immigration than the recently released Republican Party platform, which adopts the most extreme measures.

As the country gets younger and browner, the base of the GOP is getting older and whiter. Those inverted trend lines undoubtedly spell trouble, especially given the toxic impact the party’s inflammatory anti-immigrant rhetoric has had on the party’s ability to attract newcomers.

Unsurprisingly, as with all voters, the economy and jobs rank as the top priorities of Latinos. But immigration also ranks high because it is a personal issue for immigrants and Latinos. Over half of Latino voters in a June 2011 poll said they knew someone who is undocumented. More importantly, as Senator Marco Rubio (R-FL) and others have openly recognized, it is a “gateway issue”:  You can’t expect to get through the door to these voters with an economic message if you hurl insults from the sidewalk in advance.

So what are Republicans doing to address this obvious impediment? One tactic in the effort to ride – rather than get crushed by – this Latino wave has been on display at the convention, where prominent speaking roles have been accorded to several Latino elected officials.

But even at an event like a national political convention where money flows like the Mississippi River, talk is still cheap. When juxtaposed against the party’s most recent actions, it is clear that these efforts to soften the rhetoric and present a more diverse façade are running into the cold, hard reality of a party beholden to immigration extremists.

The just adopted Republican Platform shows who is really calling the shots when it comes to immigration: Kris Kobach and the far right anti-immigrant movement. Kobach, Romney’s informal immigration advisor and the author of Arizona’s noxious immigration legislation that was recently largely struck down as unconstitutional, helped construct a platform that is a collection of the most extreme immigration enforcement initiatives.

The centerpiece of the platform’s immigration section is Romney’s fairy tale self-deportation policy. The idea is to make life so miserable for millions of undocumented people and their U.S. citizen family members that they will decide on their own to leave the country. This unrealistic and economically self-defeating end would be achieved through a series of costly and counterproductive measures. The Center for American Progress has already calculated that driving the roughly 12 million people living in the U.S. without papers in 2010 out of the country would put a $2.6 trillion hole in cumulative GDP over 10 years. And the likelihood that people will voluntarily leave is remote given that more than 85 percent of them have been living in the United States for more than seven years.

The measures designed to achieve this end include expanding programs that turn local cops into immigration agents, programs that lead inevitably to racial profiling. It also relies on making E-Verify, the nation’s flawed internet-based work-authorization system, mandatory for all employers – this in spite of the fact that the system is only 46 percent accurate in detecting unauthorized workers, and a Congressional Budget Office estimate put the cost of implementing the program at $17.3 billion over 10 years.

Perhaps most startling is the platform’s clear opposition to the president’s program to grant a temporary reprieve from deportation for DREAM Act-eligible kids. Not only is this program smart policy, it is also wildly popular with Latinos and favored by a 2-1 margin by independents.

In sum, if the GOP truly laments the alienation of Latino voters, they will need more than softer rhetoric and trotting out some Latino front men. They need to stop the party’s extremist tail from continuing to wag the leadership dog.