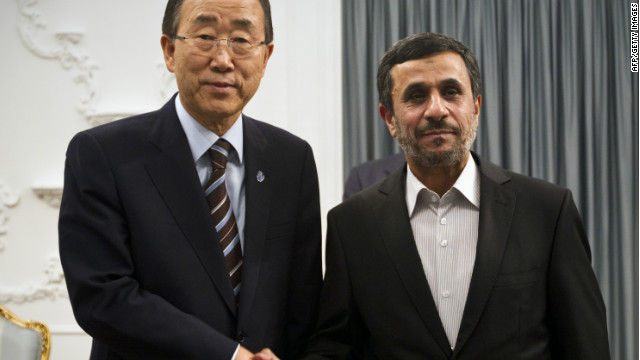 Daniel R. DePetris is the senior associate editor of the Journal on Terrorism and Security Analysis.  The views expressed are his own.

The highly-publicized trip last week to Tehran by U.N. Secretary General Ban Ki Moon was supposed to be a prime opportunity for the Iranian leadership to demonstrate to the rest of the world that the country still has a vital role to play in international diplomacy, despite four rounds of Security Council sanctions and tough economic pressure from the United States and the European Union.

Indeed, afraid that a visit to the Iranian capital by Ban would sabotage a steady and persistent campaign against Tehran on a whole range of issues, Obama administration officials and members of Congress spent a considerable amount of time urging Ban to skip the summit and bypass Iran entirely.  The Washington Post editorial board, for its part, came out swinging with its own impassioned plea to dissuade the secretary general from making the trip: “By attending the Tehran conference, Mr. Ban will dignify a bacchanal of nonsense.”

All those concerns, however, may have been misplaced. To the delight of many in the United States, Israel, Europe, and any other country working for a more stable Middle East, Ban did what he said he would: put the Iranians on notice by expressing the international community’s worries, from Tehran’s active support to Syrian President Bashar al-Assad to its assault on political freedoms within the Islamic Republic.

A mere hours after exiting his plane, he publicly called upon the leaders of the Islamic Republic to improve its own human rights record, to the shock and obvious disgruntlement of Ali Larijani, the speaker of the Islamic Consultative Assembly who was right beside the secretary general. “We have discussed how the United Nations can work together with Iran to improve the human rights situation in Iran,” Ban said. “We have our serious concerns on the human rights abuses and violations in this country.”

If those remarks were not shocking enough to the Iranian leadership, Ban had other pointed words for Iran’s leaders. Rather than catering to Tehran’s official line that its nuclear program is strictly for civilian purposes, Ban strongly urged the Iranian government to go out of its way to prove to the world that those words should be taken seriously. Ban’s plea rings especially true today, after yet another failed attempt by the International Atomic Energy Agency to obtain the access it needs to verify the regime’s argument.

Taken together, Ban’s statements are the equivalent of a one-two punch to the Iranian leadership. For a start, the secretary general has once again put the issues of uranium enrichment and human rights on the world’s agenda – two issues that the Islamic Republic hoped to avoid as it attempted to spin its hosting of the NAM summit as a diplomatic victory against the United States, Israel, and the EU. But what is far more important is that the comments illustrate the extent of Ban’s unease about Tehran’s behavior, particularly on some of the very same issues that NAM as an organization has dedicated itself to upholding. And while the words themselves may not have been revelatory, the fact that the head of the United Nations is making them in full public view, right beside senior Iranian officials in the middle of its capital, is the most obvious sign yet that the world’s preeminent multilateral organization is invested in solving the problem.

It was, of course, not a total loss for the Iranians. The conclusion of the NAM summit provided Tehran with at least some support for its nuclear work from the 120-nation bloc.  Yet even the NAM’s unanimous support for Iran’s peaceful nuclear program can be taken as more a reflection of the bloc’s backing for the principles of the Non-Proliferation Treaty (which includes the right of a signatory state to take ownership of the uranium enrichment cycle, provided it’s for a peaceful objective) than for their host specifically. In fact, it would not be a surprise to learn that Tehran’s uncooperative relationship with the IAEA frustrates some members of the NAM who one day may like to start their own nuclear energy programs.

Much of the commentariat in the United States and Israel was firmly against the secretary general meeting directly with representatives of the Islamic Republic.  Yet ironically, Ban’s decision to go, despite the criticism, may have succeeded in doing something Washington, Israel, the EU, and the Arab Gulf states could only dream of – pressuring Iran, on its own soil, to come clean on its nuclear program, tamp down on its dissent of political debate, and cease its material and arms support to an embattled Syrian dictator trying to kill his way out of a popular revolution.

Leave a Reply to James Elvert