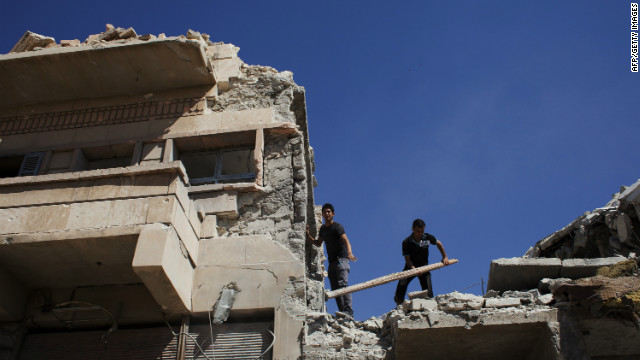 What we saw in Syria

By Ole Solvang, Special to CNN

Editor’s note: Ole Solvang is researcher with the Emergencies Division at Human Rights Watch. The views expressed are his own.  You can follow him on Twitter: @olesolvang

After a month investigating human rights violations in the northern Syrian province of Aleppo, we were hoping that the last day of our mission would be relatively quiet. It didn’t turn out that way.

We started the day at an emergency hospital in the opposition-controlled area of Aleppo city. As a nurse listed the names and ages of civilians who had been killed in artillery and aerial attacks in Aleppo city the last couple of days, we heard a strike. An artillery shell hit a house just 200 meters from the hospital, and within minutes, the wounded started pouring in. Someone brought in a little boy. There was nothing the doctors could do – half of his head was blown away.

We visited several sites of attacks around the city, speaking to witnesses and victims, examining the sites, looking at the remnants of ammunition, and taking photos. As we returned to the hospital in the afternoon, we suddenly saw people looking warily at the sky, and minutes later heard a fighter jet. We ran for cover just in time – a rocket slammed into a building two houses over from the hospital, collapsing the top floors. Five little kids, all covered in blood and dust, were brought into the hospital, while the neighbors were struggling to reach others under the ruins. Later, we learned that the attack killed two people and wounded 17, 10 of them children.

That day, aerial attacks continued outside Aleppo city. Just minutes before we returned to Marea, a town in northern Aleppo, a fighter jet dropped two bombs in the middle of the town, destroying several homes. Nobody was inside, but several children playing in the street were injured.

Opposition forces recently drove the Syrian military out of most of the northern Aleppo countryside and about half of Aleppo city. For the last month, the two sides have taken turns advancing and retreating, a couple of streets at a time, with neither party making much progress.

As part of their combat strategy, government forces have attacked areas away from the frontlines, using artillery, helicopters and fighter jets. We have documented that many of these attacks have killed and wounded dozens of civilians.

More from GPS: 'They burned my heart'

Parties to a conflict are, of course, not allowed to deliberately target or indiscriminately attack civilians. Sometimes, civilians might be killed in lawful attacks on military objectives. But that does not seem to have been the case with many of the recent attacks that we have documented in Aleppo.

During an investigation of artillery and aerial attacks like these, one of our top priorities is to look for potentially legitimate military objectives – opposition military bases, checkpoints, troop movements, weapons’ depots – which might have been the intended target. We examine the sites and interview witnesses and local residents who can tell us exactly what was going on before the attacks.

In some cases, we were able to identify potentially legitimate targets. In the town of Azaz, for example, an aerial attack that hit a residential area might have been intended to strike an old Baath party building that opposition military and civilian leaders were using. The building, however, was located 300 meters from where the bombs landed. If the Baath party building indeed had been the target, the fighter jet completely missed it, destroying instead dozens of civilian homes, killing at least 46 and injuring more than 100.

Other attacks, such as the fighter jet attack that struck a house close to the hospital on the last day of our mission, didn’t seem to be targeting any legitimate military objective. We walked past the house five minutes before it was hit. No opposition troops were there and there was nothing in the debris afterward to suggest military activity.

Most disconcertingly, however, we found evidence suggesting that some of the attacks targeted civilians. In the course of three weeks in August, government forces attacked at least 10 bakeries in Aleppo province, sometimes killing and injuring dozens of civilians who had lined up to buy bread. In one of the deadliest attacks, on August 21, on a bakery in the Bab al-Hadid area in Aleppo city, a helicopter had been circling overhead for hours. When a line formed in front of the bakery as it was about to open in the early evening, a helicopter dropped a bomb, which killed at least 20 people standing in line, witnesses told us. One of the witnesses we spoke to gave us a video that he filmed right after the attack, showing dozens of people lying on the ground, some with missing arms and legs. We could see no weapons. It seemed that everybody wore civilian clothes, as opposed to camouflage clothes and ammunition vests usually worn by fighters, supporting witness accounts that all the victims were civilians. Reckless indiscriminate attacks and deliberate attacks on civilians are war crimes.

Thousands of people in Aleppo have fled their neighborhoods, or even the country, fearing these attacks. But many are still there. While some neighborhoods and towns are almost completely deserted, others are bustling with life.

Local activist groups say that August has been the deadliest month since the beginning of the uprising, with more than 4,000 civilians killed. Increased use of artillery and aerial attacks, some of which have been recklessly indiscriminate or deliberately targeted against civilians, have contributed to the high death toll. The international community should send a clear message to the Syrian government that such war crimes will not be tolerated.

Leave a Reply to Uwakwe