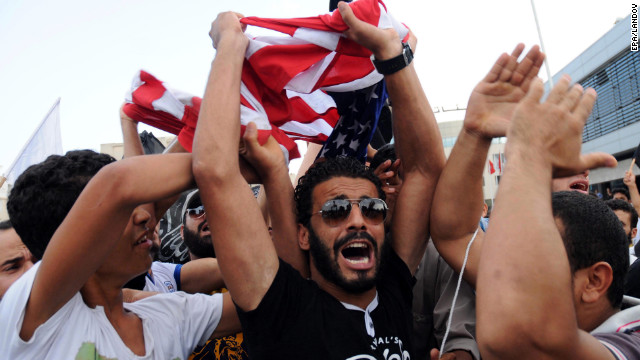 Protesters shout slogans during a demonstration outside the U.S. Embassy in Tunisia on Wednesday.
September 14th, 2012
05:39 PM ET

The images of the American embassy burning in Benghazi might have conjured up memories of Tehran in 1979 but the analogy is false.

In Libya, the government is not fomenting Anti-Americanism, it is fighting it, openly declaring America an ally and friend. The country is pro-American by a 2-to-1 margin, and the violence there appears to have been the work of small, extremist elements that lack much popular support. But the storm has spread from Libya.

Across the Middle East, there have been protests railing against the United States and the West in general. Even in these places, however, keep in mind that these crowds number in the hundreds - perhaps thousands - in countries with tens of millions of people. They make for vivid images, but they do not tell the whole story.

What can we say about these places and protests? First, in many of these countries - particularly those that have toppled dictatorships - the most important reality is not of bad government but of weak government.

In Libya, Yemen and even Egypt, the state has lost its ability to control its public. In a sense this might be progress. Egypt didn't see protests like this before because Hosni Mubarak's regime would arrest or even shoot protesters. Egyptian President Mohamed Morsy is an elected politician, and he is trying to pander, appease, direct and guide people. I wish he were bolder and fought the extremist elements in his society head-on. But let's face it, he's behaving like an elected politician.

Second, what we are witnessing is indeed the consequence of the Arab Spring. Arab societies were locked down for 50 years. The lid has come off them and we're seeing what's inside.

Q&A: What the protests reveal

There are some good elements - moderates, liberals, pragmatists - and there are some very nasty elements - extremists, jihadis. And let's be honest, there is a cancer of extremism in the Arab world, one that was diagnosed extensively after 9/11 by many, including me. That cancer has not been cured; most of the forces that produced it still remain. We should be honest that it exists, we should be honest that moderates in the region tend to be weak and often cowardly, but we should try to help them. If the United States pulls out, the crazies will only get stronger.

Next entry »Guantanamo still a blight on U.S. record?
« Previous entryOn GPS this week: What's next in the Middle East?