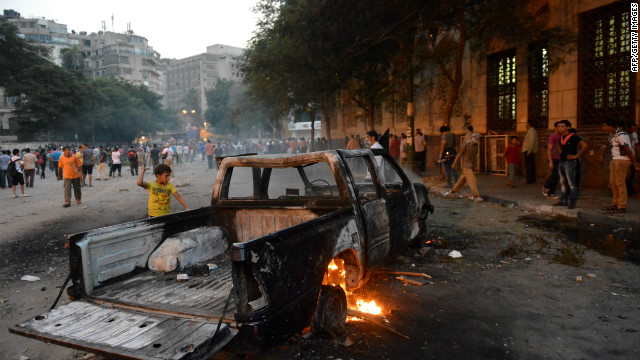 Q&A: What the Mideast protests reveal

As outrage over a video that characterizes the Prophet Mohammed as a womanizing buffoon spread across Muslim countries, details emerged about the killings of a U.S. ambassador and three others this week at the U.S. consulate in Benghazi.

So, what's next? Fareed Zakaria weighs in on extremism and freedom of speech, why a President Obama apology would be absurd and the future of the U.S.-Egypt relationship in this edited conversation:

Q: Russia's Vladimir Putin is quoted as warning that the Arab world could descend into "chaos." Is that fear is overblown?

ZAKARIA: I think it is overblown. I think what you have here is one of these periodic crises that take place.

You will remember there have been these around the Koran burning and around the Danish cartoons, and they're all signs of a fundamental problem within Arab societies, a fundamental lack of tolerance and an extremism.

More: Peter Bergen on the amplification of trend

But they have never really descended in that form because, just remember, you're talking about a few hundred people, here and there.

There may be a few places where it's worse and remember the crucial difference in the place like Libya is that the government is entirely on the side of the United States. It's trying to battle these extremists.

So, what you're dealing with is a certain degree of extremism in these societies and weak governance in many of these countries. That's different from a kind of grand revolution.

More: Ex-jihadist on why extremists don't speak for Libya

Q: Not downplaying the deaths and the violence, but do you think too much is being made of this when you listen to people yelling on the streets saying President Obama should apologize to the world and to the Muslim world for this?

ZAKARIA: Here's how I put it. I think clearly we live in a world in which the images can go viral. Protests can go viral. These things become global very quickly and a kind of feeding frenzy develops, both on the ground and in the media.

I think that that has to be separated from the real issue, and the real issue is a level of extremism in some Arab and Muslim societies that is worrisome. But let's not exaggerate it. Let's not also turn this into a problem of all of Egypt or all of Libya when we're dealing with some isolated groups that have been jockeying for power in various ways.

And, as for President Obama needing to apologize, I think it's absurd. It's ludicrous. I think what we are all waiting to hear is a proper apology from Egyptian President Mohamed Morsy, who is the one figure in all of this that has been most disappointing.

The Egyptian government has not provided the protection the United States needs. It has not reacted to the violence in the way that it should, let alone the fact that Egypt gets a lot of aid from the United States [$2 billion a year] ...

More: David Rothkopf on the fragility of U.S. relations in Mideast

It's very different from Libya. The Libyan government is actively on our side trying to ferret out these extremists, catch them, capture them, kill them.

In the Egyptian case, one has to ask, are they actually encouraging a certain degree of extremism?

ZAKARIA: Well, I think it's fair to say that there is a kind of extremism and a lack of kind of an understanding of freedom of speech and opinion.

The person who made this movie is crude, is bigoted and is a buffoon, but in the United States of America, we do not shut down or jail people who are crude and vulgar and bigoted.

They have to do something that harms people physically. People's freedom of speech, even to say offensive things, is protected. They don't get that to a certain extent, particularly relating to religious issues.

Remember Salman Rushdie, the novelist? He went through this whole period of a fatwa and things like that, precisely because people could not understand that he was exercising his freedom of speech to write a book that was regarded by many Muslims as offensive.

What we don't understand about them, I think, is that this does affect a kind of core sense of their dignity and it affects their sense of whether or not we respect them.

But I think at the end of the day, the West is in the right here. The United States is in the right. It is entirely inappropriate under any circumstances to use violence as a response to freedom of speech.

The way you counter bad speech is with good speech. Let them make a great movie about Prophet Mohammed. That's the way you do it, not by killing people, not by burning people.

Q: We talked about the amount of money in U.S. aid to Egypt. Obama is going to ask Congress to forgive about a billion dollars in debt that Egypt owes Washington. Do you think that these anti-American protesters are even aware of that?

ZAKARIA: I think they're very ill-informed. I think they know very little, but I think that the government of Egypt knows this. I would hope that we're having serious conversations with the government of Egypt and making clear to them that unless their attitude is much more cooperative and much more responsible, it will be very difficult to forgive any of Egypt's debt and, going forward, it would mean a very different relationship.

Egypt is going to have to come to terms with its own internal dimensions. There is a contest between the Islamists, the Muslim Brotherhood that is in power, and even more radical and extreme groups, which is why the president is clearly trying to curry favor with some of these groups by not condemning the violence more strongly.

And his relationship and the country's relationship with the United States will depend on that, and, more broadly, the ability of these countries to chart a moderate, mainstream, modern course is going to be powerfully affected by these kinds of choices. This is what they have to decide.

What do you think? How will these events change the U.S. relationship with Egypt? Share your thoughts in the comments below.

More:
– Free speech vs. hate speech
– Shining a light on Muslim sensitivities around Prophet Mohammed
– Will Egypt's leaders calm or fan the crisis?
– The big unanswered questions
– 6 things to know about Libya attack
– Reaction from Arab leaders and what it might mean

Topics: Egypt • Libya
Next entry »Why free speech is baffling to many
« Previous entryEx-ambassador: No time for accusers, apologists or political gamesters

Next entry »Why free speech is baffling to many
« Previous entryEx-ambassador: No time for accusers, apologists or political gamesters