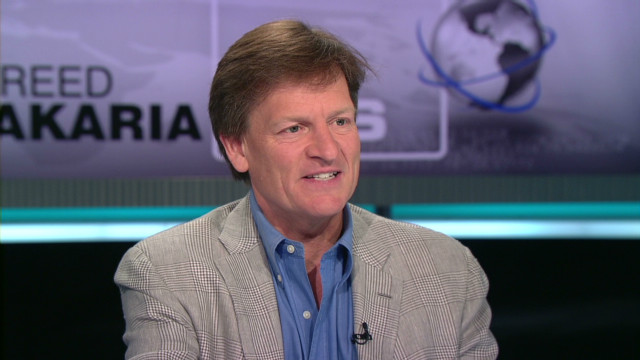 In his story for Vanity Fair, writer Michael Lewis had near unprecedented access to the president: Flying on Air Force One, a tour of the White House private quarters, playing basketball with Obama. All for an in-depth account of the day-to-day life of a sitting president.

Lewis talked to Fareed on Sunday's show about the more literary aspects of Obama. Here's an excerpt (or watch the entire interview on iTunes)

FAREED ZAKARIA: [Obama] shows you his private office, that little cubbyhole, and there are a lot of books in it, which, we know he's a reading president. But there's a novel on top, Julian Barnes. And we know from a couple of other things that you think he must be the most "writerly" president. Because it's not just about reading. Lots of them read, but he's reading novels.

MICHAEL LEWIS: If he had time, he'd likely be writing them, too. That's the interesting thing to me. I think that he's as literary a president as we ever had, and more literary than probably anybody since Lincoln anyway. The written word means a lot to him ... This isn't in the [Vanity Fair] piece, but I can remember talking to him about this a bit.

He was an indifferent student in high school up til the end, and he had a very late awakening in his mind. And I kind of identify with this, because I was a very late bloomer in high school, and I had the same sort of experience with books. He was passing by a church yard sale in Hawaii when he was a junior in high school and he saw all these novels. And they were available for a nickel apiece. It was "Moby Dick," it was Dostoyevsky, it was Saul Bellow. He thought, a nickel? You know, I'll get these books. And he took them, and he started reading them and just in a kind of innocent way he got very absorbed. ... He just kind of blended with the books.

And when he got out of school, the first thing he started to do is write short stories. And I don't know if anybody knows that. I didn't put this in the piece, but he tried to submit short stories to literary magazines, and they're very literary short stories. So it's an unusual trait in politics, in someone who ends up being a political person.

Watch the entire interview from Sunday's show on iTunes