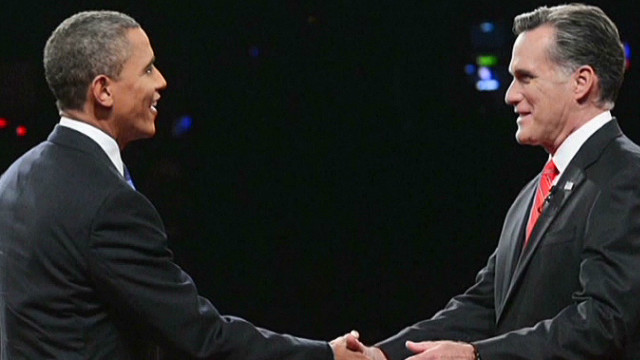 A greater challenge to Obama than a strong debater

Sometimes the conventional wisdom is right. Minutes after the Denver presidential debate, the pundits declared Mitt Romney the clear winner. And he was. He seemed engaged, forceful and punchy. President Obama seemed passive, detached and glum.

But what's more significant than how Romney said things was what he said.

Romney repeatedly insisted that he was not advocating a big tax cut. In fact, he declared unequivocally that he would not cut taxes at all if they added to the deficit at all. Now, as the Washington Post's Glenn Kessler points out in his fact checking column, for two years Romney has been campaigning on a tax cut that that would cost around $5 trillion over 10 years. Romney does claim that he would eliminate deductions and cut spending to pay for it but he hasn't given any details. Well, he offered one at the debate. He would cut funding for public broadcasting, which was 0.01% of federal spending in 2012. Medicare was 13%.

But, anyway that appears to be off the table. Romney is also in favor of regulations, including parts of the Dodd-Frank bill, and repeatedly held up as a model his health care plan in Massachusetts, which has at its center the individual mandate, and on which Obamacare is based.

Romney's transformation did not happen overnight. The candidate has been reworking his stump speech. In a very smart analysis, NPR pointed out that Romney now has a five-point stump speech. The first four points are actually identical to Barack Obama's stump speech: he argues for (1) Exports (2) Domestic energy (3) Retraining and (4) Deficit reduction. It's only on the 5th that they diverge. Romney talks about small businesses, Obama about national security.

I've long argued that Romney is an intelligent man trapped in a party that has forced him to embrace extreme and impossible positions. One of his advisers had predicted that once the Republican primaries were over, Romney would erase the image from the primaries and, like an Etch-a-Sketch, just draw a new one. Well, he appears to be doing just that. The Republican Party might hate Obama enough and be frustrated enough, to wink and let him do it.

If so, Obama faces something far more challenging than a good debater in the last weeks of the campaign. He faces a moderate Republican.

Topics: 2012 Election
Next entry »Quiz: Why did IKEA apologize?
« Previous entryAfter Benghazi, is al-Qaeda back?

Click here to cancel reply.
Next entry »Quiz: Why did IKEA apologize?
« Previous entryAfter Benghazi, is al-Qaeda back?