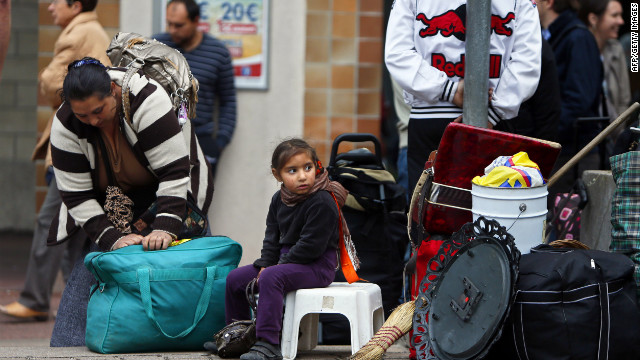 By Fotis Filippou, Special to CNN

Editor’s note: Fotis Filippou is regional campaign coordinator for Europe and Central Asia at Amnesty International. The views expressed are the author’s own.

A new memorial in Berlin to commemorate hundreds of thousands of Roma who were systematically murdered by the Nazis during World War II is an important official step towards marking the atrocities of the past. But given the treatment of Roma in today’s Europe, the monument near the Reichstag should give current political leaders pause for thought about the 12 million Roma who continue to face prejudice and persecution across the continent.

And we’re not talking about some vague sentiments here. Anti-Roma feeling in many European countries still translates into official policies that result in segregation of Roma from the rest of society, deepening and exacerbating their existing poverty and marginalization. In some instances, discrimination bubbles over into racist violence, when hatred espoused by extreme right-wing parties is acted out by youth mobs and vigilante groups.

Even as German Chancellor Angela Merkel opened the new memorial this week, local authorities in Germany have proposed measures that may block access to a fair asylum procedure for Serbian and Macedonian citizens – the majority of them Roma.

Across Europe, Roma who are often poor, socially excluded, and discriminated against are easy targets when governments carry out plans to clean up slums and informal settlements. More often than not, this is done while turning a blind eye to international obligations. Such requirements include proper consultation with residents ahead of an eviction, advance notice about any such plans and full arrangements for adequate alternative housing that meets basic international standards.

In the rare instances where Roma are provided with alternative housing, it is often segregated, poor, in the margins of cities, and next to garbage dumps, or industrial and toxic areas.

A string of recent operations to dismantle Roma camps across France continued to fall short of the international legal protections against forced evictions. In an op-ed earlier this year, the French minister of interior called for “firmness” in dealing with the settlements and an inter-ministerial meeting on the issue in August seemed to mark the government’s will for a new approach, but has so far failed to lead to new policies backing adequate consultation, notification and alternative housing for Roma facing evictions.

By dismantling camp after camp without providing sensible alternative housing solutions, the authorities are merely kicking the problem down the road.

Roma living in Italy face a similar situation. So-called “Nomad Emergency” legislation that came into effect in 2008 has allowed local authorities in Rome, Milan and other cities to be heavy-handed in closing Roma settlements. Such operations continue, despite a November 2011 ruling by the Council of State (Italy's highest administrative court) that the emergency plan is unlawful. The forced eviction of more than 350 Roma from the Tor de’ Cenci camp in Rome, completed just a few weeks ago, sends a signal that it’s business as usual.

In the cases when alternative housing is provided, it generally consists of moving families to another authorized camp on the false assumption that all Roma want to live in camps. Such settlements, like La Barbuta – a segregated Roma camp that opened alongside the noise and bustle of Rome’s Ciampino airport in June – are typically in remote areas with no easy access to services, cutting Roma communities off from the rest of society.

Elsewhere, forced evictions have other harsh ramifications. In Serbia’s capital Belgrade in April, city authorities forced more than 1,000 Roma out of the downtown Belvil settlement without giving a reason. Around 124 of the evicted families were moved into metal containers in segregated settlements around the capital, where they have no access to work. Another 133 families were forced to return to inadequate housing in poor municipalities in southern Serbia, while 94 families from Belvil still await eviction before construction of a new bridge funded by the European Investment Bank.

Many Roma experience discrimination from a young age – thousands of Romani children across Slovakia,for example, remain trapped in substandard education as a result of widespread discrimination and a school system that keeps failing them. They often face outright segregation in special schools for children with “mild mental disabilities” or are ethnically segregated in mainstream schools and classes, sometimes even being locked in separate classrooms or corridors to prevent them from mixing with non-Roma pupils.

The new national government, in power since March, has dropped previous references to ending such segregation and now talks of setting up separate boarding schools for "marginalized communities".

In neighboring Czech Republic, very little progress has been made to guarantee Romani children equal access to education, five years after the European Court of Human Rights found that the country discriminated against Roma by placing them in special schools without the necessary safeguards.

In some parts of Europe, stigma against Roma has become a pervasive part of public office. Before winning a landslide election victory in June, the new mayor of Baia Mare in northern Romania stated that “dismantling Roma shacks” in five informal settlements was his main campaign priority. He previously built a wall to partition one of the town's Roma housing estates.

And in Hungary¸ the discriminatory attitudes of the far-right party Jobbik has allegedly on more than one occasion stoked intimidation and violence against Roma communities. This included in August, when police were accused of standing by while some 1,000 people on a march organized by Jobbik and vigilante groups violently attacked the homes of Roma families living in the western village of Devecser.

It is imperative for governments across Europe – at the local, national and EU levels – to set about changing public attitudes and policies that fuel the ongoing human rights violations against the Roma. EU member states have yet to follow through on promises made in Brussels earlier this year to improve the lives of Roma children, women and men – the EU Commission must weigh in and make things right.

During the opening of the Roma Holocaust memorial, German Chancellor Merkel paid an emotional tribute to the victims, stating that: “Every single fate in this genocide is a suffering beyond understanding. Every single fate fills me with sorrow and shame.”

Commemorating the horrendous abuses suffered by Roma during the Holocaust is a key step, but Europe’s politicians must also be ashamed about the racism and discrimination that continues to affect millions of Roma today.

Next entry »Can natural gas live up to potential?
« Previous entryAbout that genocide indictment proposal...