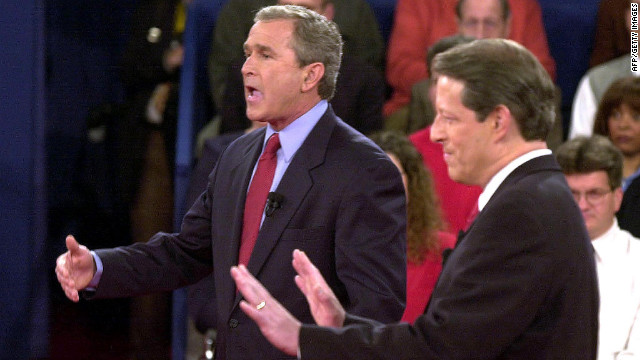 Editor's Note: The following text is from GlobalPost, which provides views — important, moving or just odd — from around the world. The views expressed are the author's own.

The 2012 presidential election is certainly going down to the wire, with polls and pundits alike calling it...well, too close to call.

Though Americans are on the edge of their seats waiting to see who will take the presidency, this isn’t the first time two politicians have been locked in a nail-biter of a U.S. election.

Incumbent Obama could look to Woodrow Wilson for inspiration. Wilson, a democrat seeking a second term against Charles Evans Hughes, was staring down the barrel of World War I, which had been sweeping though Europe for two years leading up to the election. Wilson had respected America's desire for neutrality, and campaigned on the slogan “He kept us out of war,” Yahoo Voices reported.

Though it initially seemed like Hughes, a moderate Republican and former member of the Supreme Court, had won, the results were neck-and-neck right across the country and came down to California. The west coast ultimately gave Wilson a narrow win, with 49.2 percent of the popular vote and 277 electoral votes to Hughes’ 254, according to InfoPlease’s Campaign database.

Wilson ultimately had to renege on his promise to the American people, and entered World War I when Germany began attacking U.S. ships. We wonder if Obama will have to make similar compromises should he gain a second term.

Nixon and Kennedy quite literally created the modern American debate as we know it: the showdown between the young, handsome Catholic Democrat and the incumbent Republican president was the first to be televised in U.S. history, and dramatically upended the 1960 presidential race.

“It’s one of those unusual points on the timeline of history where you can say things changed very dramatically – in this case, in a single night,” Alan Schroeder, a media historian and author of Presidential Debates: Forty Years of High-Risk TV, told Time Magazine.

While Nixon sounded like he won to radio listeners, JFK appeared confident and presidential, and took control of the race similarly to Romney's strong performance in his first face-off with Obama.

More from GlobalPost: Who funded Romney and Obama?

The vote was one of the closest in history, with Kennedy grabbing just 113,000 votes more than Nixon out of some 68 million ballots, Slate reported in a piece titled “Was Nixon Robbed?” about the uneasy closeness of the 1960 election.

“His 303-219 electoral-vote margin obscured the fact that many states besides Texas and Illinois could have gone either way,” Slate wrote. “California's 32 electoral votes, for example, originally fell into Kennedy's column, but Nixon claimed them on Nov. 17 after absentee ballots were added.”

Democrat Jimmy Carter and Republican incumbent Gerald “Jerry” Ford matched each other both in their likability and their gaffes, making their race another incredibly close call for American politics. Carter, a former peanut farmer, positioned himself as a Washington outsider, immune to influence. Ford, on the other hand, took advantage of America's bicentennial to host events that painted him as a seasoned, even-keeled leader.

In one of his campaign speeches, President Ford said something that echoes forcefully in today's race, ManyThings.com reported: “The question in this campaign is not who has the better vision of America. The question is who will act to make the vision a reality.”

Ford had an embarrassing tendency, however, to trip up the stairs of Air Force One, Authentic History reported, which got the president his fair share of embarrassing press and probably would have inspired as many memes as Romney’s “Binders full of Women” were he to run today. Carter gave a slip-up of an interview to Playboy – yes, Playboy – in which he talked candidly about emotional cheating.

The debates, especially the third, had no clear winner, and left many voters undecided (Sound familiar?) But ultimately, Carter slipped ahead with 297 electoral votes to Ford’s 240.

Certainly, we couldn’t forget the biggest close call of them all. We still break into a sweat when we think about the 2000 presidential race between Bush and Gore, which ended with the Supreme Court moving in to settle the dispute.

George W. Bush was the son of a former president and the governor of Texas, and had an easy target in the then-scandal-ridden Clinton White House, Yahoo Voices reported. Clinton’s vice president, Al Gore, had a tough sell, trying to set himself apart from his presidential partner’s slip-ups, but coming off as stiff and lacking charm in the process.

Election night 2000 was when it all hit the fan: while Gore garnered a 500,000 vote lead, Florida – the deciding state – was far too close to call, with just 500 votes separating the two candidates.

Bush had another close call as an incumbent in 2004, when he faced Massachusetts Democratic Senator John Kerry. Political reporters have delighted in comparing Mitt Romney to Kerry (see: the Washington Post and the Los Angeles Times for all the political nerding-out and cross-references).

We’ll give it to them on some counts: Yes, the economy was a central issue in that election as well, and yes, America’s foreign policy was on pins and needles, with Bush painting his opponent as a “flip-flopper,” as the Washington Post reported.

But everyone was still jittery over 2000’s mayhem this time around, and though Ohio's vote was contentious, as Harper’s outlined in a piece titled “None Dare Call It Stolen,” the election went to Bush, with 281 electoral votes to 251 for Kerry.

“Despite going into office with less than a majority of the vote, he governed as if he had a firm mandate from the American people,” Yahoo wrote of Bush. “His legacy is yet to be determined.”

Now, you can go back to your nail-biting.

Topics: 2012 Election
Next entry »How China sees the election
« Previous entry3 challenges for China's next leaders