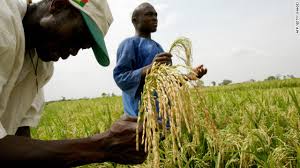 How Africa could feed the world

By Olusegun Obasanjo, Special to CNN

Editor’s note: Olusegun Obasanjo is a former president of Nigeria and a member of the Africa Progress Panel, chaired by Kofi Annan. The views expressed are the author’s own.

Images of starving children, epitomised in news coverage from Ethiopia in the 1980s, have given Africa a reputation for famine that does an injustice to the continent’s potential.

It’s true that a recent report by three U.N. agencies said nearly 239 million in Africa are hungry, a figure some 20 million higher than four years ago. And recent crises in the Horn of Africa and Sahel certainly highlight the desperate uncertainties of food supply for millions – malnutrition still cuts deep scars into progress on health and education.

But the Africa Progress Panel and many others believe that Africa has the potential not only to feed itself, but also to become a major food supplier for the rest of the world

Consider, for example, Africa’s agricultural land. According to an influential recent analysis, Africa has around 600 million hectares of uncultivated arable land, roughly 60 percent of the global total.

And on the land that is being used, outdated technologies and techniques mean productivity is low. African cereal yields, for example, are just over one-third of the developing world average and have barely increased in 30 years. One major issue is that as much as 80 percent of Africa’s agriculture still depends on rain not irrigation.

So what should be done to increase agricultural productivity in Africa?

First, African and donor agricultural policies must focus on the smallholder farmers. Some African governments see the efficiencies of large scale commercial farming as a means to increase productivity. But Africa cannot increase its food production, create jobs and reduce poverty on the scale required without unlocking the potential of smallholder agriculture.

In addition, Africa’s rapidly growing youth population makes job creation an urgent matter for many of the continent’s governments. Already, nearly two out of three Africans depend on agriculture for their livelihoods.

And in countries such as Ethiopia and Kenya, agriculture is key to reducing poverty. In these countries, agricultural growth has been shown to reduce poverty twice as fast as any other sector.

Governments must invest in infrastructure that gives these smallholders better access to markets, including storage facilities to keep produce in good quality, and new and better roads. Governments must also invest in research and development to help smallholder farmers access new techniques and technologies such as drought resistant seeds. They should encourage innovations in information and communication technologies, which may also help to involve young Africans in the sector.

Second, African government s must deal with the land grab issue, as mentioned in an earlier article for this series by my fellow Panel member Michel Camdessus.

Population growth, a burgeoning global middle class, and the search for low-carbon energy sources mean that demand for food and biofuels has shot through the roof. Spotting profit opportunity, foreign investors are scrambling for a piece of the action. They rent land, use the latest agricultural methods (plus precious water from nearby sources), export the food, and make a fortune.

Africa has been at the epicentre of global land deals. Between 2000 and 2011, for example, Africa saw an estimated 948 land deals, covering 124 million hectares – an area larger than France, Germany, and the United Kingdom combined. Many of these transactions involve countries along the Nile and Niger rivers, whose water will be used to irrigate thirsty agricultural schemes. Typically, foreign investors win concessions at low rent and with extensive tax exemptions.

Contracts are often negotiated behind closed doors without consulting affected communities. Indeed, many of these schemes have seen local communities forcibly removed from their land.

Some deals have been complicated for investors, too. In Ethiopia, an armed group ambushed workers from a Saudi-owned agribusiness project, killing five. Analysts say the ambush in April 2012 was linked to the project’s plan to use large amounts of precious water from the nearby Alwero River, upon which thousands of people depend for their survival.

At the Africa Progress Panel, we support the combination of foreign expertise with local knowledge to increase production, generate jobs, and transfer technical know-how. But what Africa does not need, and cannot afford, is the use of African land and water by foreign investors who use Africa’s scarce resources to supply food and biofuels to other countries. And for Africans, the benefits of large-scale land acquisitions have been questionable.

Africa’s smallholder farmers need protection in such deals. The African Union should develop a framework for managing foreign investment in agriculture, and governments should assess large-scale land deals and consider a moratorium pending legislation to protect smallholder farmers.

Third, governments and others must help smallholder farmers manage risk more effectively. Crises in the Horn of Africa and Sahel have highlighted the risks faced by smallholder farmers, who are barely able to feed themselves and their families as it is.

Fourth, we want to see the international community devote more money and more effort to improving food security and nutrition in Africa, an issue that goes to the heart of so many other development challenges. By weakening a child’s resistance to disease, malnutrition is a major contributor to child mortality. A global study in 2008 found that an average one third of all child deaths were related to malnutrition.

The Panel welcome this year’s Camp David G-8 commitments to launch a New Alliance for Food Security and Nutrition. This New Alliance aims to lift 50 million people out of poverty over the next decade. And we will be watching eagerly when the United Kingdom assumes presidency of the G-8 next year.

Fifth, and finally, the international community should step up their support for climate change mitigation and adaptation.

Higher temperatures, increased water evaporation, less predictable rainfall, increased water stress and an expansion of drought zones is likely undermine production. Cassava and maize yields could fall by 15 percent and 30 percent respectively by 2050, for example. And research by the International Food Policy Research Institute (IFPRI) suggests that climate change effects alone will push an additional 1 million children into malnutrition by 2030.

At the Africa Progress Panel, we hope these risks and the enormous opportunities of a growing global market will lead African governments to invest in agriculture and raise productivity. We fear that such risks could lead to a dramatic worsening of poverty and malnutrition among vulnerable communities.

But while rich countries have been spending billions of dollars on climate change adaptation, such as flood defenses, Africa has been receiving peanuts.

One recent study for Tanzania concluded that an annual investment of $100 million in adaptation for smallholders – encompassing support for small-scale irrigation, terracing, rural roads and research – would prevent annual losses of several hundreds of millions of dollars.

Consider that while the U.K. spends $1.2 billion annually on flood defenses, African nations receive just $100 million to $200 million for climate adaptation through the specialized multilateral funds created for this purpose. This amounts to what Desmond Tutu has aptly described as “adaptation apartheid.”

African leaders and their partners must all do more to shape the continent’s mighty farming potential. One day Africa could feed the world. But first it must feed itself.