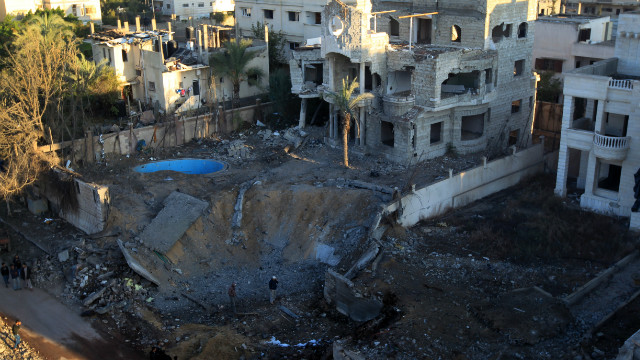 What the Israel/Gaza violence means

The International Crisis Group’s Robert Blecher, director of ICG’s Israel/Palestine Project, discusses the latest outbreak of violence between Israel and Gaza, and what it means for the region. The views expressed are Blecher’s own, and are based on a video interview conducted today.

Why is the violence we’re seeing today so much worse than in recent years?

The violence today between Israel and Gaza is the worst that there’s been since Operation Cast Lead four years ago. Israel right now is in an election season and the government is running on a platform of security and stability. It makes them look completely impotent if they can’t stop hundreds of rockets from raining down on their citizenry. The citizenry has a real demand for safety and security.

Also, from the perspective of the Israeli government, they want to change the rules of the game. They want to reestablish deterrence with Hamas – the kind of deterrence that has not existed in a number of years now. So they want to force Hamas to do things differently.

And I think on the Palestinian side, it’s the same, it’s the adverse calculation: that Hamas wants to show that despite the fact that it gets hit hard by Israel, it can continue to send rockets and they will not bow to the pressure being exerted on them from the other side.

What are the implications of all of this, both regional and local?

If this goes on and Israel gets pulled into a ground invasion into Gaza, that can really change the political dynamic completely. What will Israel do if it does end up incurring into and potentially re-occupying parts of the strip? That’s a very important question. That’s an especially important question within the changing regional framework. We’re in a new Middle East, with new actors, and we have both Israel and the Palestinians and Hamas trying to calculate what this violence will mean for each of them vis-à-vis their relationship with Egypt. They have to calculate what this might mean in terms of consequences in the West Bank for a weakened Palestinian Authority that now has a people watching Israel repress Palestinians in Gaza – even as the authorities in the West Bank are shutting down demonstrations in solidarity with Gaza.

More from CNN: Rockets rain down on Gaza

You have questions about Jordan. There are protests happening as we speak in Jordan, which mainly are economic so far. But, it looks horribly unseemly for a Jordanian government to be repressing a citizenry of which 50 or more, 60 percent is Palestinian, at the same time as Israel is going after Palestinians in Gaza.

And then you have the question of Hezbollah, with its back up against the wall in Lebanon because of pressures from the Syrian uprising. And what does Hezbollah do? Does Hezbollah get involved? Does it not want to get involved from Lebanon, so it chooses to maybe try to get involved from Sinai? What does that then mean in terms of Israeli action in Sinai? And the potential reaction of Egyptian public opinion to the Israeli involvement on Egyptian soil? These are incredibly complex questions with regional consequences, as a result of the changes within the Middle East region.

How does this current round of violence end?

More from CNN: Will Twitter war become the new norm?

There needs to be real cessation of rocket attacks and violence for Israel, because hundreds of rockets landing on Israeli territory and terrorizing Israeli citizens is obviously not acceptable either for the Israeli public or for its government.

Finally, there needs to be a resolution or an agreement for what role the Ramallah-based PA in the West Bank plays in this Gaza equation. If we were to have a resolution of the Israeli-Palestinian conflict, there needs to be a Palestinian entity to implement that agreement. Until all of these pieces are included, the situation is Gaza, the violence for Israel, the West Bank piece, and the regional piece, how these three actors are going to interact with their regional neighbors and partners, you’re not going to have a sustainable resolution. What we’ve learned is that until there is a regional solution, the bilateral violence cannot stop.