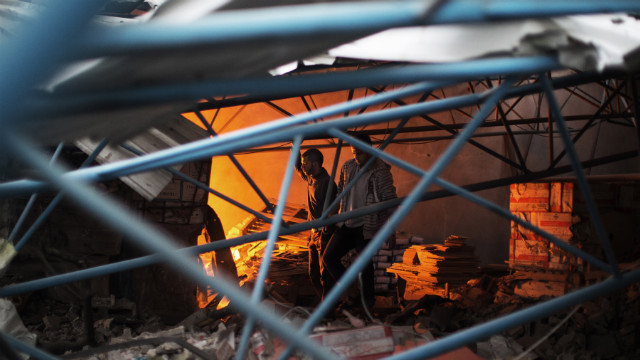 Editor's note: Robert Danin is Eni Enrico Mattei Senior Fellow for Middle East and Africa Studies at the Council on Foreign Relations. This entry of Middle East Matters originally appeared here. The views expressed are his own.

By Israel’s accounting, Operation Pillar of Defense has achieved many if not most of its major objectives: assassinating Hamas’ long-sought after military mastermind Ahmed Ja’abari and other top officials, destroying much of Hamas’ long-range arsenal of imported Iranian-produced Fajr-5 missiles, and eliminating other significant high-value military targets. Despite this, however, a number of unintended consequences have already emerged, ranging from the boosting of Hamas’ prominence, undermining its isolation, further weakening the Palestinian Authority’s Mahmoud Abbas, and diverting regional attention from Syria.

Fundamentally, the operation – an outgrowth of a rapid escalation of the past year’s episodic firing from Gaza into southern Israel and IDF strikes against limited targets – appears to have an been the unintended consequence of Hamas’ miscalculation: The organization apparently determined it could build up long-range rockets in Gaza and allow its truce with Israel to erode without incurring a significant price. Over the past year, Hamas, the de facto ruler in Gaza, allowed even more militant groups to launch mortars and rockets into southern Israel seemingly thinking that Israel’s response would be limited. The fact that its military leader, Jaabari, felt confident to let strict operational security lapse and leave himself vulnerable to an Israeli strike while riding in an unprotected vehicle reflects that.

But rather than marginalize Hamas, Israel’s operation so far has only enhanced the centrality of that organization. That by-product is entirely consistent with Israel’s aim – to compel Hamas to take responsibility for developments in Gaza. As in the 2009 Cast Lead operation, Israel’s goal now is not to destroy Hamas, but to compel it to behave more responsibly and keep order in Gaza. Much of the mortar fire over the past year against southern Israel has been launched by groups more radical than Hamas. By holding Hamas responsible, Israel inadvertently bolsters Hamas’ standing and legitimacy as the ultimate power-broker and arbiter in Gaza.

Yet this objective of forcing Hamas’ responsibility has unintentionally contributed to undermining Israel’s longstanding objective of keeping Hamas isolated internationally, if not regionally. With the United States, Israel, and other countries urging Egypt to rein in the Gaza leaders, Hamas’ centrality as the locus of decision-making grows rather than diminishes. This then encourages other Middle East leaders to accelerate their rush to Gaza while skipping Ramallah to court Hamas’ leadership.

This Qatari, Turkish, Tunisian, and Egyptian courting of Hamas has the unintended consequence of further eroding the stature of the Palestinian Authority under Mahmoud Abbas, a Palestinian leader avowedly committed to the non-violent path. By bypassing Ramallah and President Abbas, they further marginalize the moderate leaders as the proper address for resolving problems. This still leaves the Ramallah-based Palestinian authority shouldering much of the burden for the situation in Gaza by being the largest source of sustenance for the Strip’s wage-earners. It also has the unintended consequence of boosting the diplomatic standing of Islamist supporters: Egypt, Qatar, and Turkey.

More from CFR: Hamas and Egypt

The fact that Israel has acted with considerable restraint compared to its conduct of Operation Cast Lead has created conditions boosting Hamas’ domestic popularity, at least for now. Gazans have sustained the majority of the casualties and damage so far, and don’t expect to beat the Israelis militarily. Just causing the Israelis pain – piercing the “Tel Aviv bubble” and lashing out against Israeli Jerusalem – is seen as a tactical achievement, so long as it does not incur demonstrable defeat or the populace overwhelming loss. That perception is why, in addition to taking out Hamas’ increased military capabilities in Gaza, Israel feels the need to strike a decisive psychological blow – an aim that may well prove elusive.

The current conflict will also have the further unintended effect of reinforcing President Abbas determination to seek non-member state status at the end of the month. In Palestinian eyes right now, it is Hamas that is seen to be taking action, not Abbas. Abbas thus no doubt feels all the more compelled to carry out his threat to resume his U.N. gambit, despite strong American, Israeli and other international opposition.

A final unintended consequence of the conflict has been to eclipse the regional and international focus on Syria, where hundreds of people have been slaughtered on a daily basis for the past year and a half. Al-Assad will likely exploit this by ratcheting up his brutality against Syrian rebels and civilians while eyes are gazed elsewhere. While the course of Operation Pillar of Defense is still to be played out, we can be sure that it will be filled with surprises.