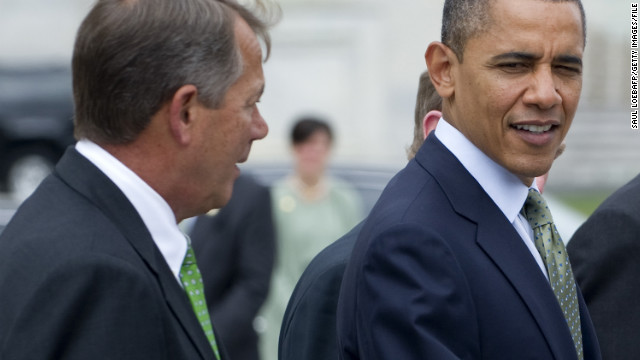 Zakaria: Will we get big fiscal deal, or small?

Talking about the fiscal cliff involves guesswork at this point, but here is my guess.  There will be a deal before the end of the year, when spending cuts and tax rises are scheduled to kick in. But will we get a small deal that simply gets us through the immediate crisis, or will there be a grand bargain?

The outlines of an eventual deal are pretty obvious – there will be some increase in tax rates as well as some closing of deductions and loopholes because, the rate increases being discussed don’t get you enough revenue. And in return for this, there will be some spending cuts or, more likely, restraints placed on future spending. For a grand bargain, you would need major tax reform and major entitlement reform. Neither is likely. So we’re likely to get some patchwork solution that will be enough to stave off a crisis.

How to get there? Republicans should give in on the tax hikes and focus on the issue of what kind of spending cuts they would like to see, and how real these cuts would actually be in practice. Democrats should make sure they get the tax hikes and try to shape the spending cuts so that they are neither immediate nor do they hit the poor too hard.

More from CNN: Forget the cliff, economy is rebounding

Who will win? Right now, it seems to me that President Obama is in the more powerful position and has been playing his hand with a kind of toughness born of the lessons he has learned over the last four years. He’s refusing to negotiate with himself, refusing to produce his own compromises before offering them to the Republicans, and he is forcing the Republicans to provide some specifics.

This is ultimately a matter of numbers, and there is a way to split the difference so that the two sides can meet somewhere in the middle. But I think it will be closer to the president’s side of the spectrum than the Republicans’. Elections have consequences.