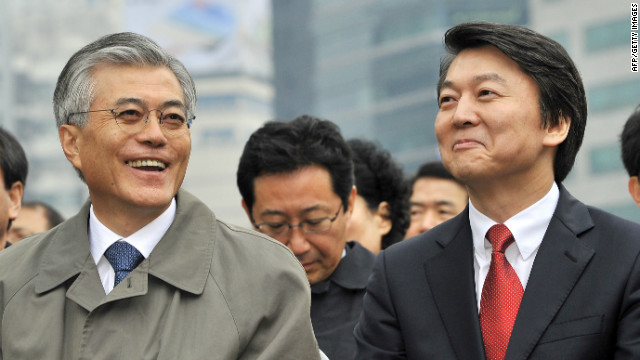 By John Delury, Special to CNN

Editor’s note: John Delury is an assistant professor at Yonsei University Graduate School of International Studies and a senior fellow for the Asia Society Center on U.S.-China Relations. The views expressed are his own.

South Korean voters are about to choose a new president to lead their country for the next five years. It has been a hotly contested campaign, with opinion polls too close to call and voter turnout expected to be upwards of 80 percent. The race has come down to a dead heat between the liberal candidate, Moon Jae-in, and his conservative opponent, Park Geun-hye, and it’s unclear who will win.

But one thing most people do agree on is that, of all the issues that have been fiercely debated, one topic that is seen as marginal to the outcome is what to do about North Korea.
This might strike outsiders as strange – after all, North Korea just conducted a surprisingly successful satellite launch (the joke in Seoul now is that if the Koreas ever reunify, at least the South will get a viable space program). Given the heightened tensions on the Peninsula, which erupted a couple years back in naval clashes and artillery fusillades along their dividing line in the West Sea – and considering that North Korea’s nuclear program is barreling ahead, now with a second, uranium path to the bomb – how could North-South relations not be the key issue in the race?

Part of the answer has to do with campaign strategy. The conservative candidate worked hard to distance herself from the incumbent conservative president (Lee Myung-bak), whose hard-line North Korea policy is unpopular with all but the true believers on the right. This was smart politics – by narrowing the distance with her liberal rival, she neutralized the North Korea question and inoculated herself against the charge that inter-Korean relations would continue to deteriorate were she elected.

The other half of the answer has to do with electoral politics. Independent, swing voters – the ones that the liberal and conservative camps are now battling for – are not terribly interested in North Korea. They are skeptical that engagement will lead to peace, and they are equally if not more skeptical that a hawkish approach will do any better. More importantly, though, they simply don’t care that much. Many of these undecided voters found themselves inspired by the charismatic reformer Ahn Cheol-soo, who electrified Korean politics with his brief run for the presidency, only to drop out and throw his support behind the liberal Moon. Tellingly, Ahn never spoke with the same kind of passion and vision about inter-Korean relations as he did about domestic issues in the South. Moon and Park are scrambling to pick up any stray Ahn supporters, and they won’t win those votes by talking about Pyongyang.

We are left, then, with an interesting paradox. The outcome of this election, which at this point has little to do with North Korea policy, is likely to have a profound effect on inter-Korean relations and on the fate of the Peninsula.

The new leadership in Pyongyang under Kim Jong Un has signaled an interest in improving inter-Korean relations, and making a strategic shift of its own from prioritizing military spending to prioritizing economic development. If the next government in Seoul makes a bold, strategic decision to re-engage the North, there is good reason to expect that inter-Korean dynamics can improve markedly, reviving everything from humanitarian aid and development assistance, to family reunions and cultural exchanges, to economic cooperation and political dialogue.

If Kim Jong Un is going to engineer a shift from “military-first” to “It’s the economy, stupid,” he is going to need Seoul's encouragement – and he doesn’t have five years to wait. It is up to the stronger power to unclench its fist first, so that the leader of the weaker state can outstretch his hand. Which of the two Koreas is the stronger? Consider this fact – South Korea's annual defense spending is roughly the size of the entire North Korean economy.

But what about the nukes? If Seoul, Washington and Beijing coordinate resumed engagement with Pyongyang smartly, there should be a way to build gradual denuclearization into the process of improving political and economic relations. That, after all, is the only conceivable way North Korea will give up its nuclear deterrent.

By contrast, if the next South Korean president continues the current policy that makes engagement contingent on North Korean denuclearization, or treats it as the reward for Pyongyang’s good behavior, then we can expect more clashes in the West Sea and DMZ, more missile and nuclear tests, more fissile material and proliferation risks. North Korean people will continue to go hungry, and the two Koreas will continue to grow further apart.

Although North Korea has little to do with who wins the South Korean election, the winner of the presidential contest will have much to do over the next five years to put the Korean Peninsula back on a path to peace, reconciliation and prosperity.