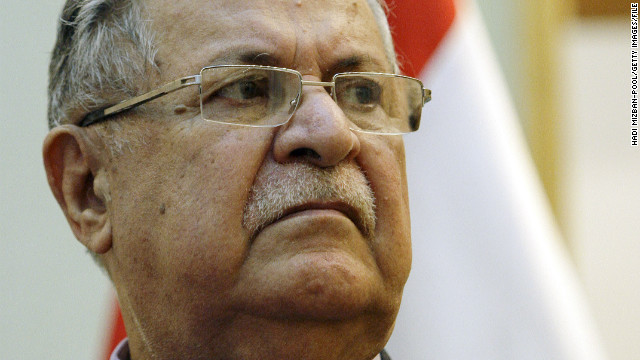 Who would succeed Talabani?

Editor's note: Michael Rubin is a resident scholar at the American Enterprise Institute and senior lecturer at the Naval Postgraduate School. The views expressed are his own.

Early this morning, Iraqi President Jalal Talabani suffered a stroke. While his spokesman is releasing few details other than to acknowledge Talabani is in stable condition, some around described the president as comatose. Should he not recover, his loss would strike a blow for Iraq.

Unlike his Kurdish rival Massoud Barzani who often strikes diplomats as cold and aloof, Talabani was an affable man with ready humor. A polyglot, he put Americans, Iraqis, and Kurds at ease, maintained relationships with almost everyone, and so became a natural choice for Iraq’s presidency after Iraq held its first free elections in 2005. He would negotiate one day with Grand Ayatollah Ali Sistani in Persian, the next day with American diplomats in fluent English, debate Prime Minister Nuri al-Maliki in Arabic, and then instruct his own staff in Kurdish. Few trusted him – his commitments tended only to last until his next meeting, he is said to have leaked American intelligence like a sieve to Iran and vice versa, and he was responsible for a disproportionate amount of pre-war intelligence regarding Saddam Hussein’s alleged weapons systems – but all talked to him and most liked him. In short, he was the perfect figurehead for Iraq.

While the U.S. media has largely ignored Iraq since the withdrawal last year of the last American troops, Talabani’s ill-health does not surprise Iraqis. The president’s health has long been shaky; Talabani has made a half dozen trips to Minnesota’s Mayo clinic in recent years for various ailments exacerbated by obesity and diabetes, compounded by years of excessive smoking and drinking. Talabani’s extended absences have become commonplace. Just this past summer, Talabani was absent from Iraq for almost two months after suffering complications from knee surgery.

Politicians in Baghdad and in Iraqi Kurdistan have long planned for Talabani’s demise: Should Talabani remain incapacitated or pass away, the first question Iraqis will ask is who else can fill his role. Iraqi vice presidents are largely ceremonial, and even if one assumes acting power, he will not continue in the position for long because Kurds will demand that they retain the presidency.

After Talabani’s tenure, Kurds see the presidency as their slot. This has certainly been the hope of Barham Salih, Iraqi Kurdistan’s former prime minister and a long-time member of Talabani’s political party, the Patriotic Union of Kurdistan (PUK). When, in early 2007, Talabani flew to Amman for emergency medical care for a “toothache,” Kurdish sources say Salih met with Iranian intelligence at Penjwin, a border town, in order to make his case to succeed Talabani. While word of Salih’s actions put him in the doghouse with Talabani and Talabani’s wife Hero Khan, the Kurdish press has reported that in recent months, Salih has been at it again, lobbying both the White House and the leadership of Iran’s notorious Islamic Revolutionary Guard Corps. For this and personal reasons, Hero Khan, a kingmaker within the PUK, may do all she can to prevent Salih’s rise.

Other Kurds will push for Foreign Minister Hoshyar Zebari, the uncle of Iraqi Kurdish President Massoud Barzani, a move that will simply unleash a new round of fighting over who should take the helm at the foreign ministry. Whether for president or foreign minister, other communities will push for their own favorites. In the deal-making that followed Iraq’s 2009 elections, Iraq’s interim Prime Minister Ayad Allawi won a plurality but was unable to cobble together a coalition and form a government. He has since used his substantial capital to lobby neighboring Arab states to keep his political prospects alive. The White House briefly hoped Talabani might step down to allow Allawi the presidency as a consolation prize, a move the Kurds flatly rejected, but one which will surely re-emerge should the presidency again open.

Regardless of who succeeds Talabani, diplomats and Iraqi politicians must soon confront the elephant in Iraqi politics: The arrangement by which they distribute positions on the basis of ethnicity and religious sect. At issue is whether Iraq will follow Lebanon’s confessional system. In that tiny yet diverse Arab state, the president is a Maronite Christian, the speaker of parliament a Shiite Muslim, and the prime minister a Sunni Muslim. Such a compromise worked well in Lebanon until demography began to shift; the result was a 17-year civil war. Alas, Iraqi politicians may not be farsighted enough to prioritize long term stability over short-term deal-making, and risk setting Iraq down Lebanon’s trajectory. The only thing that unites Sunnis, Kurds, and even Shiites, is the belief that they have been shortchanged in Iraq’s power lottery.

Compounding the succession question will be Iraq’s current political impasse. Barzani encouraged Talabani to take the presidency less for Kurdish pride and more to get his longtime opponent away from Iraqi Kurdistan. Talabani, however, brought the rivalry to Baghdad. While Barzani sought a vote of no confidence to bring down the Maliki government, Talabani maneuvered to keep the vote off the floor of the parliament. Any nomination will become hostage to this and other unresolved Baghdad disputes. Maliki’s future may not be the only one at stake. Many Iraqis would like to send Tariq Aziz, Iraq’s imprisoned Saddam-era foreign minister, to the gallows. While former members of Talabani’s inner circle acknowledge that Talabani ordered his party loyalists to kill political opponents over the years, Talabani has refused to sign Aziz’s death warrant on the basis that Talabani opposes capital punishment. A new president might not be so inclined; certainly parties like Ayad Allawi’s which represent former Baathists will not be inclined to accept a nominee who will carry out Aziz’s sentence.

Talabani’s death might also upset Kurdish stability. The PUK is beset by infighting among Hero Khan, Barham Salih, and former PUK Prime Minister Kosrat Rasul. In recent years, Talabani has also sought to promote his younger son Qubad within the party. Both Barham and Qubad are liked in Washington and London but many Kurds question their legitimacy because neither fought against Iraqi forces as peshmerga, guerilla fighters. Kosrat was a popular peshmerga commander, but his health is poor. Talabani’s wife’s reputation for ruthlessness – and her J. Edgar Hoover-esque control of files regarding her peers quirks and faults – may not be enough for her to consolidate the remnants of her party, or hand the reins to Qubad.

The question then becomes who fills the gap. Both Gorran – a popular reformist party founded by Noshirwan Mustafa, Talabani’s former deputy – and Barzani’s traditional Kurdistan Democratic Party will try. The problem is that for 20 years, Barzani and Talabani resolved their divisions and divided power in backroom deals rather than at the ballot box. (Iraqi Kurdistan is still yet to hold its scheduled 2009 local elections). If Mustafa and Barzani cannot strike a deal, Kurdistan’s stability might be upended: While Mustafa would no doubt relish free and fair elections, Barzani is more likely to fight than trust his future to the electorate. Iraqi Kurdistan may seem stable today, but its devastating civil war is only 15 years behind it, something Kurds remember only too well. The family members of those who Barzani and Talabani’s security forces consigned to mass graves continue to demonstrate for justice. A new round of fighting might not replicate past battles, but it could take the form of assassination waves and bombings.

Exacerbating the political reshuffle on both the Kurdish and larger Iraqi stage will be the disposition of Talabani’s extensive business interests. When Qubad Talabani represented the Kurdistan Regional Government in Washington, he worked as much as his father’s business agent than as a representative of Iraqi Kurds. Much business in Iraq is personal, and absent the patronage of a figure such as Talabani, many businesses – American firms included – may find their contracts worth considerably less than the paper on which they are written.

Let us hope that Talabani recovers. But should he not, expect the next year in Iraqi and Kurdish politics to be a true roller coaster ride.