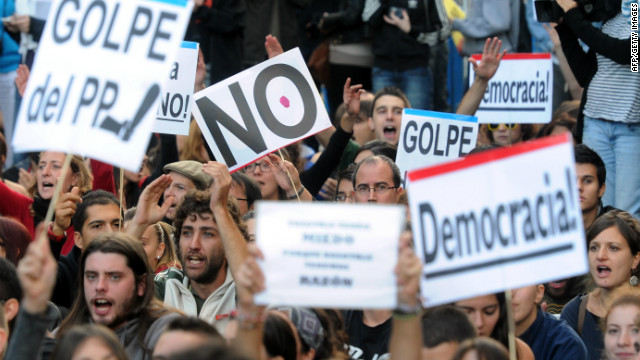 This is the latest in a series of entries looking at what we can expect in 2013. Each weekday, a guest analyst will look at the key challenges facing a selected country – and what next year might hold in store.

Editor's note: José Ignacio Torreblanca is a lecturer at UNED University and Head of the European Council on Foreign Relations’ Madrid office.

How does 2013 look for Spain? Is the worst over? The answer to that question depends largely on how “worst” is defined.

The absolute worst scenario, the collapse of the euro, can now be set aside thanks to the decisive action of European Central Bank President Mario Draghi. The wording he chose in a statement on the issue – “I will do whatever it takes to save the euro and, believe me, it will be sufficient” – was exactly what the markets had been waiting for since 2010. Markets now know that betting against the euro could be dangerous.

But this does not mean that the crisis is fully over.

For domestic political reasons, EU leaders are still reluctant to follow Draghi’s lead and do whatever it takes to consolidate the euro. A banking union has been born, but it is still half-baked, while the more ambitious proposals aimed at a fiscal union are still in their infancy. EU leaders are expected to continue with their exasperatingly slow and piecemeal approach. And, especially with German elections looming, expect “too little, too late” to best define the EU’s snail-like progress.

The next worst scenario, a Spanish exit from the euro, can also be dismissed. Following some hesitation over the acceptability of a Greek exit, Angela Merkel has realized that the survival of the euro implies and requires the survival of its individual members. With the European Stability Mechanism, the European equivalent of the International Monetary Fund, the EU has erected a financial firewall able to break the vicious link between sovereign and private debt. Spanish banks, which as in the United States were a source of the crisis, won’t be able to topple Spain. This means that while Spain might still be pulled out of the markets, be forced to apply for a full rescue and be placed under the supervision of the Troika, it won’t be allowed to fail.

More from CNN: Spain's next crisis?

But avoiding two major disasters does not mean that the worst is completely over. Growth prospects for Spain are weak, indeed negative, for 2013. Analysts also believe there is little or no prospect of an improvement in the unemployment situation over the next two years or more. With a staggering 25 percent of the active population unemployed – a figure that climbs to a staggering about 40 percent of those under 25 – joblessness in Spain is now not just a social drama, but risks undermining the legitimacy of the political system.

Five years into the crisis, Spaniards have turned their backs on politicians, who they consider too detached and insensitive to understand the pressing concerns of the average Spaniard. A series of corruption scandals, involving all major national institutions – from the Crown to the municipalities – has demoralized the public and further eroded confidence in democratic institutions. In addition, the tough austerity measures imposed to meet public deficit targets imposed by the EU mean that, for many citizens, the Spanish welfare state (including its world class and free health system) is now being questioned.

To top it all off, Spain faces a secessionist challenge, an issue that is further poisoning politics and stirring passions across the country.

All this means that Spain finds itself squeezed from above, as the EU piles pressure on the country to enforce further austerity measures, and from the market side, as the economy struggles to create jobs. This economic malaise provides the backdrop for a society showing signs of increasing fatigue, and which is now pushing back against cuts to health, pension and education services.

Next year will be a tough one for Spain, and while most of the economic reforms necessary to help it overcome the crisis are already in place, their effects are not yet being felt in a positive way. Spaniards have averted the worst, and are no doubt hoping for brighter days ahead. But the prevailing feeling here is one of despair over the lack of progress in growth and employment, and frustration over the high social costs of the crisis, including rising inequality.

2013 will be a transition year. But Spain should prepare itself for plenty of bumps on the road to better times.