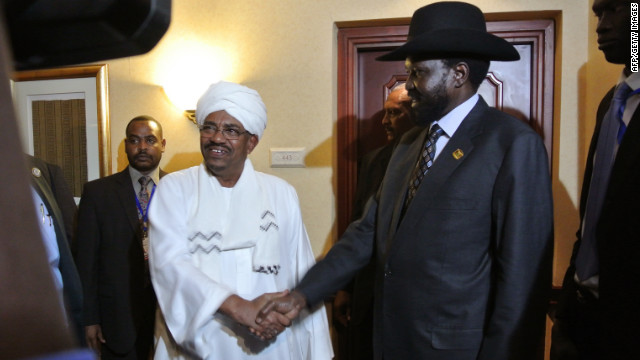 Sudan and South Sudan in 2013: Rise or fall together

This is the latest in a series of entries looking at what we can expect in 2013. Each weekday, a guest analyst will look at the key challenges facing a selected country – and what next year might hold in store.

Editor’s note:Alex de Waal is executive director of the World Peace Foundation at the Fletcher School. The views expressed are the author’s own.

Eighteen months after the secession of South Sudan, its future is still tied to its northern neighbor and former mother country. In 2013, Sudan and South Sudan will rise or fall together. If the two can overcome their rancor and work together, both can be economically viable and rebound from their respective economic crises. If not, both countries may become ungovernable.

At a summit in the Ethiopian capital Addis Ababa on September 27, 2012, South Sudan’s President Salva Kiir and his Sudanese counterpart Omar al-Bashir signed a series of agreements to resolve the outstanding business left over from the secession, to settle the disputes that had brought them to the brink of all-out-war in April, and to reopen South Sudan’s oil production – source of 82 percent of its GDP. But they haven’t been implemented yet.

One pillar of the agreements is economics: South Sudan resumes export of its oil using the infrastructure (oil pipeline and terminal) in northern Sudan, with a transitional payment to the government in Khartoum to help cushion it from the fiscal shock that followed the loss of 75 percent of its oil production when South Sudan seceded. The two countries also agreed a joint approach to international donors for debt relief and development aid. Sudan is under financial sanctions while South Sudan’s economy, already one of the poorest in the world, shrank by more than half after its shutdown of oil production in January 2012, in a dispute with the north.

The second pillar is security: a demilitarized and internationally monitored border and an end to supporting rebels fighting against the other. South Sudanese are particularly frustrated about the north repeatedly stalling on agreements to allow the people of Abyei Area, which lies on the border, to vote in a referendum to decide whether they belong north or south. The northerners accuse the southern army of harboring and supplying a range of rebellions ongoing inside northern Sudan.

Implementing the agreements would seem to be a win-win for both President Bashir and President Kiir. Both desperately need the money to stave off destabilizing austerity and popular discontent. But each leader is weak in the face of the veto power of members of their own oligarchies with special interests, including generals determined to salvage the pride of their military establishments, and the rival constituencies with an interest in Abyei, each of which is resolute that the area should not be forfeited to the other.

The two countries’ long term needs are hostage to these short term calculations. Northern Sudan desperately needs a political leadership with a vision of the country’s future as a democratic African nation, respecting the diversity that still characterizes Sudan after the loss of the South. Northern Sudanese feel a deep sense of betrayal: with the Comprehensive Peace Agreement of 2005, which brought to an end more than 20 years of civil war, Sudan was promised peace, unity and good relations with the West. Eight years on, none of the three has been achieved. The international community needs to be respectful of that grievance, and mindful of the dangers it may entail.

The world’s newest state, South Sudan faces enormous challenges in meeting its people’s aspirations for development and good government, neither of which are currently in evidence. South Sudan’s credibility was damaged by its reckless actions during 2012, but still commands much international sympathy and solidarity. Its prospects will be helped by some tough love from foreign friends.