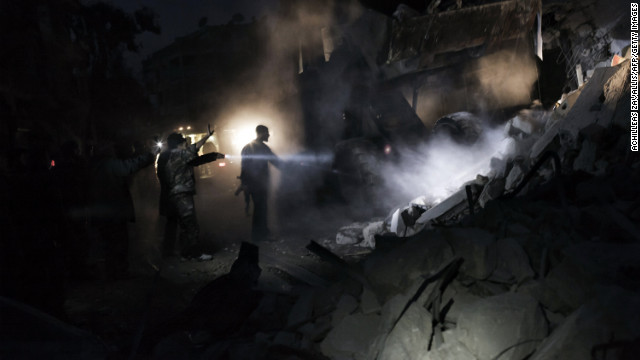 Editor’s note: Michael Spindelegger, Karl Erjavec, Eamon Gilmore and Villy Søvndal are the foreign ministers of Austria, Slovenia, Ireland and Denmark, respectively. The views expressed are their own.

Over the months, we have been following the events in Syria with growing concern. We support the aspirations of the Syrian people to freely choose a government that represents all the enriching diversity of this multi-confessional nation, one that respects the rule of law, human rights and democracy. It is deplorable that the current regime in Damascus has not heeded the repeated calls for a peaceful transition of power. As do our colleagues from the Arab League, we strongly condemn the violence by the al-Assad regime against the Syrian people. We call on all sides to end the violence and to genuinely support the U.N.-led efforts to achieve a political solution.

But recent developments have given reason for even more serious concern. U.N. peacekeepers were seriously injured when a convoy of the UNDOF peacekeeping operation on the Golan Heights was attacked. Reports about possible preparations for the use of chemical weapons circulate. The al-Assad regime is preparing Damascus for confrontation with the rebels and we know that these situations of last stand urban fighting often result in the most terrible atrocities being committed in armed conflict, with particular dangers for civilians. Concerned that the crisis in Syria may soon reach a new level of violence, we publicly appeal to all parties to the conflict to abide by international law, especially international humanitarian law and human rights law, and to recall that all those that commit or order war crimes and crimes against humanity will be held accountable. This principle cannot and will not be negotiated.

As we know from the work of the U.N. Commission of Inquiry on Syria, horrendous crimes have already been committed during the conflict in Syria, but there have been no consequences for the perpetrators. It is precisely for situations like this that the international community established the permanent International Criminal Court (ICC) ten years ago. This independent judicial body can provide justice when a state is unable or unwilling to prosecute the most terrible crimes. Since Syria is not a party to the ICC Statute, jurisdiction of the Court requires a decision of the U.N. Security Council. In view of the grave concerns mentioned above, and the lack of prosecution in Syria, we call on the U.N. Security Council to urgently refer the situation in Syria to the ICC. In this respect, we welcome the Conclusions of the European Union Foreign Affairs Council on December 10, 2012 and the Swiss initiative at the United Nations to achieve this goal.

A referral to the ICC – which has repeatedly been suggested by the U.N. High Commissioner for Human Rights, Navi Pillay – has several advantages. The Court is a neutral and impartial institution that investigates and prosecutes the most serious crimes on all sides. A referral would give the leaders of the Syrian opposition a strong argument to call for discipline among its diverse forces. It would give the members of the al-Assad regime a further reason to question their allegiance. And it could assist the search for a political solution to the conflict. As we saw in other crises, parallel political and judicial processes are mutually supporting. There is no decision to be taken here between either peace or justice – a sustainable, long-term solution requires both.

Most important, however, a referral to the ICC would make clear to every fighter on all sides of the conflict that the gravest crimes will eventually be punished. We owe this not only to the victims and their families, but also to future generations of Syrians who want to live in a free state founded on the principles of peace and justice. And we owe it to the future of humankind: After thousands of years of sometimes gruesome history, human civilization must no longer accept impunity for the most atrocious crimes. Only if we make absolutely clear that these crimes will not go unpunished, can we reduce the likelihood that humankind will have to suffer from them in the future.